Starting this thing off with a Thursday reco, yes. Because, for the majority of workaday toilers, the weekend can never begin soon enough, right? 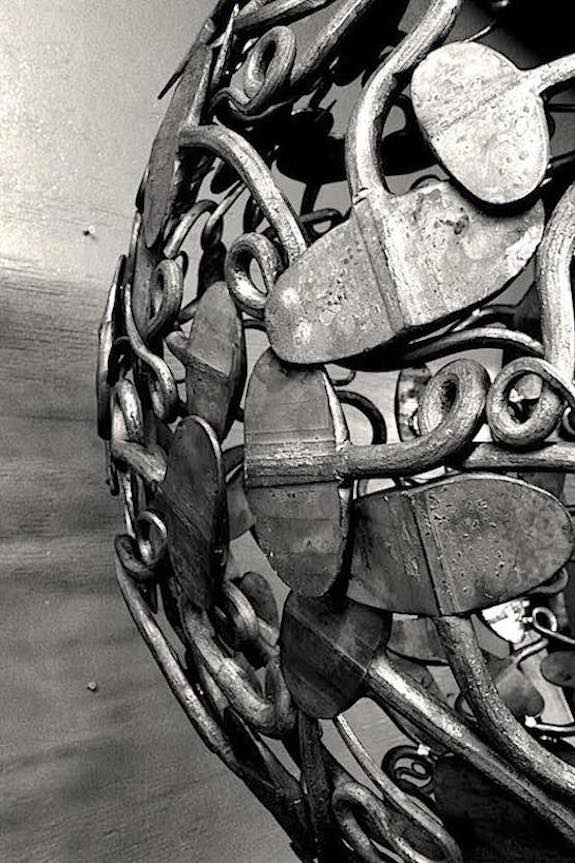 At Dimension Gallery: Just a little something from the benthic zone, is it, Mr. Woodward?

1) Dimension Gallery, that local bastion of so many things stunning and sculptural, opens its newest exhibition this Thursday night at 6pm. It’s a show called Benthos, featuring storied metalmonger Haley Woodward’s 3-D distillations of visions from the bottom of this planet’s ever-swelling seas – and of course it’ll be surrounded, as ever, by the low-slung and towering beauties of the venue’s impressive Paved Garden. Also, you know what’s right next door to Dimension now? Blackfeather Vintage Works – an intimate emporium of fine raiment and industrial ephemera run by Jessica Nieri. [Note: Nieri used to own Cafe Mundi, remember? That coffee place with the praying-mantis mascot?] Yes, all along that whole Springdale strip, those refurbished warehousey cups of cultural goodness runneth over.

2) You know how Austin’s City Hall, instead of being the dull edifice that many city halls can be, is a gorgeous, eye-rewarding, locally-sourced structure designed by Antoine Predock and associates? Maybe that’s what encourages the People’s Gallery within those walls to feature artwork that’s also worthy of a populace’s attention. And maybe that’s why you want to attend the opening soirée – this Friday night from 6-9pm – that reveals 2018’s array of more than 100 creations from Austin artists. (We’d probably mention that Shawn Camp’s Remnants of the New Axial Age is part of the collection, but we already talk too much about that man’s brilliance, don’t we?)

4) Not always a lot of dance events going on in Austin, are there? Especially since that Jennifer Sherburn’s 11:11 came to an end – and the choreographer is working on her new projects in (shhhhh!) secret. But, you know what they say about how good things often come in threes? This lucky weekend’s got new performances from Shen Jun Movement Effect, a film screening from the Stephanie Patrick Dance Company, and the annual showcase of Chaddick Dance Theater.

5) You know the Weird Homes Tour that happens in Austin each year? How it’s one hell of an enjoyable, eye-opening look at some of the architectural exuberance and interior-design oddness that can still be found in this burgeoning burg of ours? Well, the originators of the tour – David and Chelle Neff, who’ve expanded the event to Houston and New Orleans and are working with the cities of Detroit and Portland for their versions of the blessed thing – those Neffs have also published a book about the Austin tour, a book so jam-packed with amazing photos that it’ll scratch your oh-I-want-to-see-these-things itch even as it spurs you to make early reservations for this year’s installment of the tour. And that book? Will be released at a reception with the authors at BookPeople this Sunday at 2pm.