Local arts collective devastated by flames as the year begins

Somebody’s torched the headquarters and studio of the local art-making, book-publishing, record-producing, event-promoting collective – we featured them in a cover story here a few years ago – and the Fire Marshal (Deputy Tate Markey, in the lead) is currently investigating. 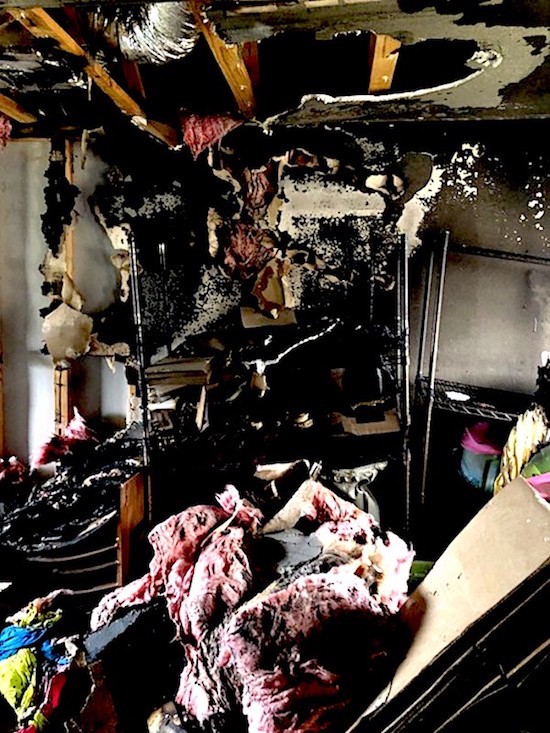 The devastation is, well, it’s pretty much total for all concerned.

Raw Paw’s got an Indiegogo campaign up right now, trying to recover from this treachery as best as they can. Meanwhile, any number of things going on behind the scenes investigation-wise, we spoke with the group’s co-founder Chris Dock, to get his take on the situation.

Dock: So, uh, January 2nd, we’d taken a break – to go and see our families for the holidays. Our only vacation of the year was that week, the week before, so the first day back to work was gonna be January 2nd. And we planned to go in at noon. And I’m drinking coffee in the morning, January 2nd, getting ready to go back to work. And I get a call on the Raw Paw number, and it’s the Fire Marshal. And he says, “Hey, I’m in your house right now, and you’ve had a fire here.” And immediately, my mind goes into a wormhole of trying to figure out what happened. Because I knew that Kyle Carter, my other partner, on New Year’s Eve at 6pm, he went to the house to cover the pipes. And I was worried that he’d turned on the heat, and maybe the heat caught something, or maybe a light was left on and it caught something …. My mind was running through all the scenarios of How Did This House Burn Down, you know? But, simultaneously, the Fire Marshal was asking me questions about – I don’t even remember, honestly, what he was asking me – but I was trying to answer him while, in my mind, trying to figure out what happened. And I picked up Kyle right away. And I called Jen [Rachid], I was like, “Jen, you’ve gotta get off work right now, I’m picking you up.” And the three of us drove out to the house, having been told nothing other than there was a fire. And when we got there, all three of us were interviewed by the Fire Marshal, and, uh, on their police report screen, it said in big type at the top, it said ARSON.

Dock: One hundred percent. And I looked at that screen, all three of us did, and we were like, “Arson? Arson?” Not just, uh, fireworks? Or, uh, heat or, or – electricity? Arson? And they took us inside, and we did a walk-through, and … the emotional experience of seeing it is hard to quantify. It felt like – and still does – like walking into a nightmare awake. And hoping that someone will give you a sign that, “No, this is just a nightmare.” But, later, you go to sleep, and you wake up, and it’s still there. It’s still there. And, yeah, there were clear signs of arson.

Brenner: What signs in particular?

Dock: The details – I don’t know what I can tell you. You know? The investigation, I don’t –

Brenner: So, how do they – the Fire Marshal, the cops – how do they go about finding out who might have done this?

Dock: Seems like they’re getting the story from everyone connected to it, as much information as they can. And that’s why I did that post on Facebook, like “If anyone’s heard anything,” you know what I mean? A little comment someone’s made, anything that can help figure this out. Because I’m, ah – I’m seriously looking over my shoulder, you know? I’ve installed security at my house.

Brenner: Jesus, that’s – man, Chris, I’m sorry you have to deal with this shit. And your studio, was that … ?

Dock: All of it. All the equipment and supplies and the, the business that we survive on. Every canister of carefully calculated ink color for each specific client or poster. Other bands’ records, our records. Almost the entirety of Kyle Carter’s artwork, all the posters he’s made since he started working as an artist. And every single zine and coveted book I had, and so much of, so much of my work, you know? Everything that I made since I left my parents’ house to become an artist. And it keeps happening: I’ll think, “Oh, I have one of those,” and now? Actually? I don’t have any of it.

Brenner: But you had, ah, you had insurance on the place?

Dock: We parted ways with a partner, end of last year. And that partner had the insurance in his name – and they ended that insurance on December 28th. And my plan was to set up the new insurance on January 2nd? So there was a five-day lapse of having insurance. And – it’s hard to even put a number to what we just lost.

Brenner: Ah, fuck, man, then just recovering from this is gonna be, ah – because Raw Paw will continue, right? Raw Paw isn’t over.

Dock: It’s hard to know what I can safely say – because I am currently under attack. I don’t want to give any, ah … [shakes his head]. But the mania of the moment for me has been the severity of how terrible this is. Paired with every little comment and message that everyone in the fabric of my entire life has sent me, it’s – it’s just very, very intense. In both directions. And the fire, that destroyed our house? A neighbor called the fire department at four in the morning. And if they hadn’t, if it had continued, there’s people out there – families, kids – it wasn’t just an attack on Raw Paw, it threatened the whole neighborhood.

Brenner: And where is that, exactly? Y’all are headquartered – somewhere east, right?

Dock: It’s outside of Austin. You drive through Del Valle, you pass the prison, you pass the waste-processing plant, you pass two highways. It’s called Austin’s Colony, and that’s where our house is in. When we were looking for a place to build our studio, each of us had like three hundred bucks, right? And we couldn’t find a place in Austin. So we went to Austin’s Colony, and we got a house out there, so we could do our business in the garage. And the people out there are fucking great. Nice, hardworking people. We were out there, spraying screens in the middle of the night, Kyle blasting death metal out of the garage, no one ever complained the whole time. We were there for almost five years, and I have a lot of love for that neighborhood out there. And every day at six in the morning until like eight in the morning, there’s a line of everybody leaving to get back into Austin. There’s only one way out of the neighborhood, and only two streets back to Austin, they just added one more street into the neighborhood. There’s no bus. I have friends living out there, and they don’t have cars, and there’s no bus. And, you know, there’s no Uber, there’s no Lyft, there’s no, like, pizza delivery. You can’t get a library card if you live out there. And it’s an Austin address – Austin, Texas. And people should know that Austin’s Colony exists, that it’s part of the culture of Austin, and the city should put some effort into services out there.