The Year In Review, just as it says on the tin. You know, the tin.

This Year in Review show at Spider House Ballroom on Thursday night, listen, it’s one of those can’t-miss deals. 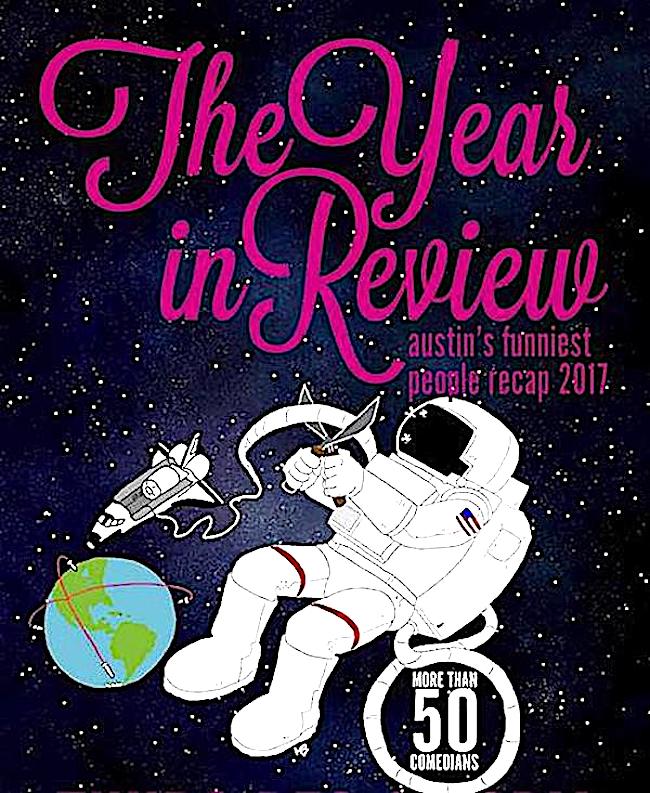 I don’t mean that you can’t miss seeing it – because who the hell am I to tell you what to do, citizen? – but that the show itself can’t miss being something worth seeing.

Because it’s good to get a review of any year at that year’s end, isn’t it? And especially when a year’s been as basically fucked as 2017’s been, it’s even better to get a review – so you don’t have to try and make sense of the entire twelve-month shitstorm all by yourself.

But, also, you don’t want some dull-as-human-oatmeal talking heads droning at you about the significance of this and that and the other thing, yadda yadda yadda, until your brain tries to crawl out of your head and hide somewhere else until the whole monotone megillah plays itself out.

So, you know what’s handy?

The fact that some of the funniest comedians in any given town are also among the smartest people in that town. So, while attending a year-end review by stand-up comics, you can get the sharpest insights and the biggest laughs.

And, since this is Austin, Texas … and this Spider House gig is hosted by Mac Blake and Rob Gagnon and Lisa Friedrich … and that knock-out trio’s corralled so many of the best comics this burgeoning urban sprawl (barely) supports …

So that’s our justification. For the initial can’t miss assertion.

And how did this informative, crack-your-comedy-loving-ass-up gig get started, anyway?

“This is the fifth year for the show,” says Mac Blake. “Joe Hafkey and myself were running the Jazz Cigarette show at Spider House and they had an extra show slot on December 30th. We thought it'd be hard to get people out the day before New Year's Eve, so we decided to book a show with a lot of comedians. I thought up the format, pitched it to Joe, and off we went."

“First year attendance was okay,” says Blake. “The second year was packed – that's when we thought we might have something. Last year we had to turn away over 100 people. For someone who frequently does comedy for a lot of empty chairs, turning people away was agonizing.”

“And then I murdered Joe in a ditch that, oddly enough, ended up being his final resting place,” says Rob Gagnon. “The rest is history.”

“The three of us – me and Rob and Lisa – run monthly shows at Spider House,” says Blake. “Well, Lisa actually co-produces two. She and Rob are Austin comedy hustle machines: They run shows, they've helped book festivals, they do sketch and improv and they know talent I don't know.”

This is the point where I flash on that paradox of the barber who cuts the hair of everyone who doesn’t cut their own hair. Because hosts Blake and Gagnon and Friedrich are boffo in the laugh department, themselves, and the line-up – even this stellar line-up – would be improved by their own performances. And, glad to note, will be.

“But the three of us are such a small part of the live show,” says Blake. “With 50 comedians bringing the heat, the spotlight is on the comedy scene as a whole.”

And that comedy scene as a whole will be turning its spotlight on the year that most recently was. That most recently was something that requires experiencing this night’s Review – if only so we can survive with enough sanity intact to make it into 2018.

Look: If it’s not already sold out, you can reserve your tickets here.