Two Shannons Take the Improv Stage to … Where?

Local stars McCormick and Stott, together at last for the first time

The Shannons, y’all. Two of them.

McCormick and Stott, Stott and McCormick.

Two Austin-based improvisers who are, separately, nigh on brilliant. 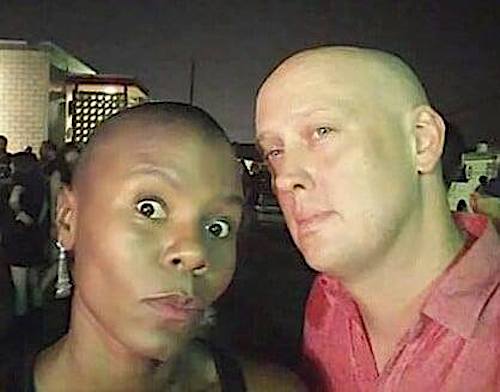 Also – trained in the art of improvisation, their natural talents amplified by professional-level chops earned via years of classes and practice and live performance with different troupes.

Get Up. The Escorts. False Matters.The Big Bash. Kenjutsu. Immigrants.

But … how will they work as a duo, right?
And why did they team up in the first place?

Stott: For me, it was because I’d get messages that were like, “Hey, Shannon, blah-blah-blah-blah.” And I’d be like, “I’m sorry, I don’t know who you are.”

McCormick: It was like their email autofill would fill in my email name?

Stott: Exactly. And then they’d be like, “Oh! Have you met Shannon?” And I’d be like, “I have never met this person.” And they were like, “You should meet!”

McCormick: I feel like we didn’t meet until after Out Of Bounds 2016. I saw Shannon play with The Escorts, and then, afterwards, people were like, “You haven’t met before?” And she was fantastic, and –

Stott: – and we were both bald.

McCormick: She was bald at the time! And that was really the genesis of the whole idea: We’re both named Shannon, we’re both bald, we both do improv – we should do a troupe, just for us.

McCormick: But it took us so long to get together –

Stott: – that now I have lots of hair.

So only one of the Shannons – McCormick – is bald now.
Because time. Because seconds, minutes, hours, days – what?

McCormick: Getting this going, it sort of just spontaneously happened out in the parking lot at ColdTowne Theater, but then messaging each other back and forth –

Stott: – trying to get in touch with each other –

McCormick: – trying to find the time to make it happen. And it took us, like, a year to get it together.

But, reader, they finally have.

And now it’s going to be an ongoing thing.
Oh, definitely: A long-running project, a duo for the ages!

Stott: Nobody knows yet! Just – let us get the first thing off the ground!

McCormick: Let us do our first show! It’s coming up. It may be so painfully bad –

Stott: – that we’ll never speak again. It may be terrible!

But certainly these Shannons have been in shows together already, yes?

McCormick: We’ve been in some Maestro shows. We may have done two scenes together, total. But I’ve seen Shannon perform, I know she’s a very strong performer. And I’m not a newbie improviser.

Stott: We’ve both been performing for over ten years.

McCormick: I’m not concerned that we’re doing a show without having performed together before.

Stott: It’s gonna be great. I think both of us really enjoy character work, which is going to be awesome – all sorts of characters. And body work, as far as morphing and that kind of thing? Physicality is the word I’m looking for.

Stott: And I think that’s going to be a lot of fun to play with.

McCormick: Yeah – it’s gonna work. If Shannon hadn’t played in a style that resonated with me when I first saw her, I’d’ve been like, “Hey, you have the same name as me – cool – whatever.” But I was super-jazzed about her performance.

Stott: And I’ve seen Shannon in Get Up at least once – and loved it. He and Shana Merlin do a really energetic show. So having somebody to be high-energy with, and be able to be grounded in scenes, is gonna be a lot of fun.

We wouldn’t argue that with either one of these Shannons, so we sure as hell won’t deny two of them. Besides, they’re opening for Paralellogramophonograph in this inaugural outing at The Hideout on Friday night. Which likely means it’s gonna be nothing but win-win-win-win the whole show long, tell you what.