The Frank Mills Call It Quits After 500th Show

Why is one of the city’s top improv troupes breaking up?

The Frank Mills, one of this city’s most acclaimed improv troupes, have been performing a weekly show at ColdTowne Theater since April of 2010. Hell, they’ve been doing their impressive and unscripted comedy thing on stages around town, anywhere and everywhere, since 2005.

And all of that will end with this week’s show. 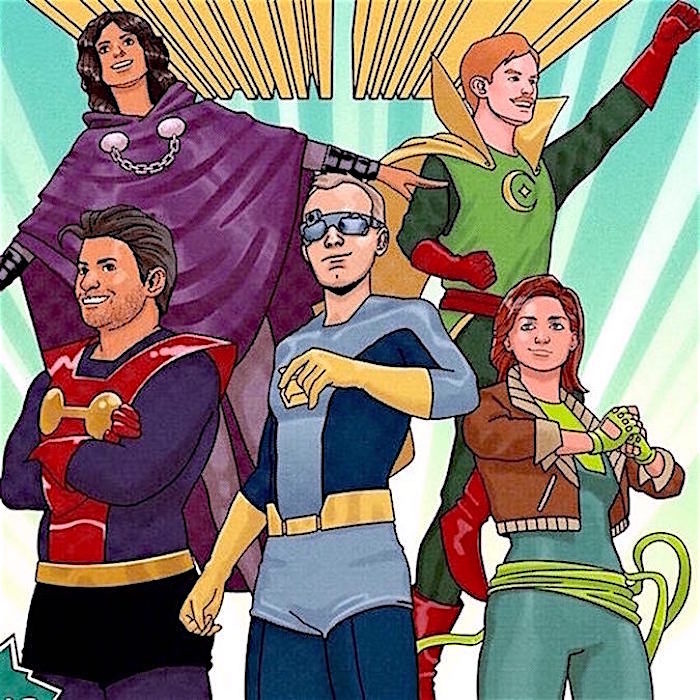 But let’s not be so fucking dramatic: McNichol and May are moving away, is all, leaving the Lone Star State to be closer to family. Been a long run, a lot of history made and alliances forged and the usual bits of joy and misery experienced within the circles of camaraderie here in Austin, and now off they go to the north.

“You’ve Got a Friend in Pennsylvania,” that state’s catchphrase once insisted. And if you know the affable couple at all, that’ll ring even more true a few weeks from now.

And of course Madorsky, Buckman, and Jastroch will still be here in the ATX – so you could have breakfast tacos with them anytime.

But let’s not get ahead of things. Let’s make sure we’re clear about what’s happening right now: On Thursday, Dec. 14, at 8:30pm, the Frank Mills will perform their 500th – and final – show.

(You should click this link instanter, see if the gig’s not already sold out, get yourself some tickets if you can.)

And let’s also, since the fantastic fivesome is defunct after this Thursday, take a brief look at where they came from, what they’ve done, and what’s up next in their separate adventures. Luckily, as if due to some pre-holiday miracle, we interviewed the Frank Mills about all of that stuff just last week …

Brenner: How did the four of y'all get together in the first place?

McNichol: Well, Dave and Rachel were part of a group called Tight, with our friends Jen Cargill and Erin Plischke. And Mac Antigua. And they were nice enough to let Erika and me join that group when we moved up here in 2005. Then Jen and Erin moved away –

Buckman: They went back to Seattle. And they were like the middle couple between the two of us and the two of them, and when Jan and Erin left, it was just the four of us. And we were like, “Well, it’s not Tight anymore, let’s have our own thing.” And so we spent a solid couple hours in the Hideout Theatre green room figuring out –

Madorsky: Erika said, “We have to have a name by tonight.”

Buckman: That’s right. Because Out of Bounds needed a name.

McNichol: And we talked about that song from the musical Hair – “Frank Mills.” Which is sung by Martha Plimpton’s mom.

May: And that’s how we got our name.

Brenner: And now there’s Jastroch, too. I mean, Todd Schanbacher was part of the troupe for a while, right?

Brenner: But then he left, and so how did –

Jastroch: I forced my way in. [laughs] Okay, I was in the main ColdTowne troupe, and we stopped performing together. We’d been doing a weekly show for, like, eight years or something ridiculous like that, and then one of the ColdTowne members moved away and everyone got too busy with their own projects. And so I was left without an improv troupe. I was kind of a free agent for a while – I finally had my Saturday nights free! And that lasted for about three months. And then, thank God, these guys snatched me up. Because, otherwise, I don’t know what I’d be doing. A kids' show at 10am on Saturdays?

Madorsky: I remember that I pitched adding Michael, because I felt he fit perfectly with us – he’s so generous and fun and flowy. And something I love about this group is how generous and flowy and gift-oriented we are.

Jastroch: And, okay, here’s a story. On the opening night of ColdTowne Theater, the first night the place was open in 2006, the ColdTowne troupe and the Frank Mills did a combined show. And I hadn’t been doing improv that long. And because these guys had Chicago bona fides and I looked up to them so much because of their talent … on the opening night of my own theatre, I was too scared to get onstage with them.

Jastroch: The show was an hour long, and I was too intimidated to play with them until about 59 minutes into it. And then I finally stepped out onto the stage, and that’s when the lights came down.

Jastroch: That’s my pet story that I tell students when they’re like, “I’m stuck in my head, I’m scared.” I’m like, “Yeah? Listen to this bullshit that I did.” So it’s crazy, getting the chance to play with them now.

McNichol: Yeah, it was basically just one long show.

May: John Ratliff was hosting it, and he said something I’ve never forgotten. He said, “You’ll find this night is a lot like Taco Bell: It’s the same ingredients, just combined in different ways.”

Jastroch: That was the night you were facedown on the ground?

Buckman: That was me and Chris. And they were putting things in our butts.

McNichol: Actually putting things in their butts, yeah, I remember that.

May: It’s always the most important art that happens in our shows.

Jastroch: That’s what differentiates us from other troupes in town: We’re not afraid to put imaginary things in each other’s butts. Art!

Brenner: What’s the worst night y’all have had onstage? Any show where, no matter what you did, things just wouldn't work at all?

Jastroch: One of the cool things about playing with these guys – for me, at least – is that everyone’s been at this for so long that even our worst show is still all right. I mean, it might not feel good to us, but it’s not that feeling of, like – all these guys are so poised and patient, even if it’s not our best work, it’s still worth it.

Buckman: Hard nights, you feel like, ah, like you’re trying to walk through water and not going anywhere. I can’t think of a single night in particular, but …

May: I think improv shows are like having kids: You forget the shitty stuff. You look back and you’re like, “It was all wine and roses!” It seems like it was all magic, but I’m sure we had some shows that, ah …

Madorsky: I know we’ve had shows where it was hard. But, yeah, fortunately we forget them.

Jastroch: There was one, maybe two years ago, where Bob and I both had a tantrum after the show. Well, okay, I had a tantrum, Bob was more of a mature adult. But we were both like, “I never want to experience that again.” It was so uncomfortable being up there, just one of those off nights. But it’s great when that’s just one out of, like, 104 shows.

Brenner: The style that you guys play in – or tend to play in – where you break off into these little aside, little side scenes. I’ve seen other troupes do that, but your troupe does that a lot in each show, it’s more like you weave it together like a plaid instead of stripes, and you’ve got this great rhythm … did that follow naturally, just from the way y’all work together, or was it an intentional construction?

May: In every show, which we do weekly, for a long time we were like, “Let’s do slow-grounded.” Not grounded in terms of it being serious or super relational, but always coming back to an idea. But for the last year and a half, we’ve been more like, “No, let’s just do that.” Like, let’s work that other muscle that we don’t use a lot, and so we’ve been doing that – it’s one we call Tag-Out City, which is tagging things out and following tangents and then coming back to a grounded idea.

Buckman: And circling back to them. Yeah, we’ve had other forms where we’ll do just one long scene, a monoscene, with a pop out here and there, or a show that’s like an amalgamated Harold. And this one is just following down rabbit holes. The second we’re in a scene that feels like it should be something else, we just go there – chase the fun.

Jastroch: At ColdTowne, the style of improv we do is grounded in a form that originated in Chicago, called the Harold. Loosely speaking, it’s about following characters and relationships, but mostly ideas, instead of something like a beginning-middle-and-end story. And, because we all come from a similar background, we can make up any form or structure without it being pre-planned. We just kind of discover the flow of the show and how to interconnect as we’re going. We have the same internalized rhythms, so, right before we go onstage, we can go like, “Let’s play a little bit like this tonight,” and then make those adjustments.

Brenner: But now that the band is breaking up, what happens next?

Jastroch: Rachel and Dave and I have a contract: We’re not allowed to improvise anymore.

McNichol: They swore to us.

Buckman: Actually, we’re gonna have auditions in January – on January 2nd. We’re gonna keep the show’s timeslot, but get some new members, get a new name.

McNichol: Erika and I will be flying back to try out.

Brenner: Okay, let me ask you a question that’s maybe kind of itchy? You guys … you guys are you guys. I mean, you know everybody in town. You know who the most talented players are, you’re probably good friends with most of them. So why the open auditions? Why not just … cherry-pick the best?

May: Because Michael Joplin already left.

Jastroch: There’s so many young improvisers now. With five improv schools in town, none of us know all the young talent coming up. And there’s some really talented people who may’ve not been doing improv that long, but I wouldn’t say we’re better than them. There’s some people coming up that I’ve seen on this stage, and I’m like, “Whoa, I wanna play with that guy.” So, yeah, we could just reach out to people we already know, but it’s also fun to see, “Who don’t we know?”

Buckman: We’re inviting particular people that we do know, some of our favorites on the scene, telling them about the auditions. But there’s definitely a lot of new people out there, and we want to see what they’ve got, see who’s interested.

Jastroch: Yeah, we don’t want to be the three old fogeys who’ve been around the improv scene forever and don’t, you know, evolve? We need to interject some new blood.

Madorsky: And as long as the new people are exactly like Bob and Erika, we’ll be fine.