Tick-tick-tick goes the year-end timepiece, better do these now … 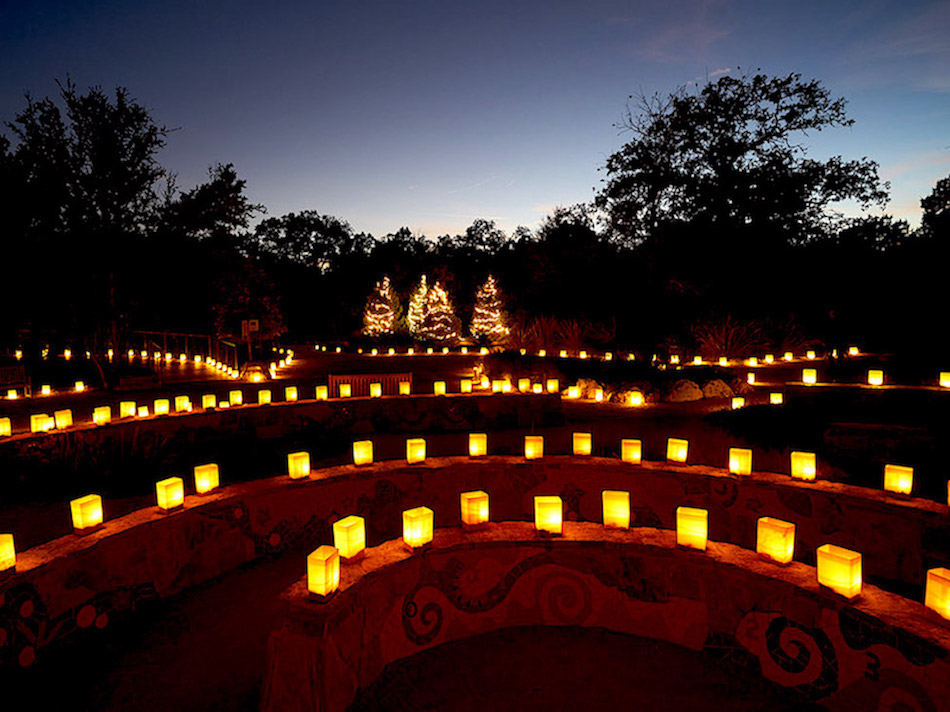 1) Sometimes you want the feeling of getting the hell out of town for a little while without, well, without the hassle of actually getting the hell out of town. That’s where the Lady Bird Johnson Wildflower Center has always come in handy: It’s no day trip, not by a long shot, it’s just a few extra minutes beyond a cross-town drive … but it’s definitely out there on the periphery, just far enough past the edge of our oppressive urban glut. And this weekend that flora-forward center becomes a veritable glowing wonderland for escaping into, with the Luminations event providing creative light displays and night-time walking trails lit by thousands of luminaria within the serene landscape. And, since this is Austin, there’ll be an array of decent live music in the main courtyard, too – along with much hot chocolate to drink and do-it-yourself maple taffy to put a vibe of sweet warmth into your evening’s away-from-it-all chill session.

2) But sometimes it’s good to be right smack in the midst of everything, isn’t it? To be an active part of whatever delightful shenanigans are going on among a group of talented revelers? Well, if you’ve been in Austin for any time at all, you know that those Rude Mechs know how to party – and this year their Karaoke Christmas Carol will lull you in with tasty adult beverages and make you and your happiest friends and neighbors part of the performative mix, singing your hearts out, enacting all the various parts of the Dickens classic, all Scrooged up and Marleyed out and totally Tiny Timmified as the night rocks on and those various Ghosts ply their cautionary trade. And never mind that bit-of-undigested-beef, hearty citizen, but beware the Rock Solid Fruitcake Challenge!

3) Sometimes music is “classic” because it’s what they call Classical; sometimes it’s “classic” because even though it’s rather modern it’s almost universally beloved and also what they call “iconic.” Note: They, in this case, is we. And we recommend two holiday-themed music shows this weekend. For a night of ancient tunes that go even farther back than Classical, avail your ears of the glories put forth by the Texas Early Music Project this weekend, as Daniel Johnson and his gang of goldenthroat vocalists and period-instrument practitioners perform works from Medieval Spain and England and Baroque France and Germany and more; and, for the more modern marvels of Vince Guaraldi, check out the Austin Chamber Music Center’s Charlie Brown Christmas at the Paramount on Saturday, featuring Michelle Schumann (piano), Utah Hamrick (bass), and David Sierra (drums).

4) Comedy always has a place at the holiday table, of course (your reporter’s own extended family is a nonstop laff riot of barely repressed racism, homophobia, and vendetta-borne micro-aggressions, tell you what), and while this town is rocking with all manner of stand-up and improv and sketch comedy all the fucking time, this weekend we’re pointing you toward those veteran funsters of Esther’s Follies. Because we know they’re gonna make you laugh and wince and shake your head and then laugh some more; because they’re giving the holiday season just what it deserves; because their topical spectacles of sketch and song and dance make for a solid night out; because the illusions and antics of master magician Ray Anderson are superlative; and because, yeah, we’re a little influenced by the terrific new book that Jesse Sublett just released about the longtime Downtown troupe.

5) Whither shall you wander? That’s what we’d like to know – and we’re stoked to find out at Saturday’s debut party for Wander, the newest project from the city’s excellent Art In Public Places program, revealing what artists Chris Gannon, Chadwick Wood, and Brockett Davidson have cooked up for public engagement and roaming interaction. Unveiling what that team has made manifest with help from local illustrators and authors and code warriors who’ve conspired (not in an Alex Jones manner, mind, but in a more Craig Hella Johnson sort of way) to bring Austin its own choose-your-adventure experience – with public art and a dedicated mobile app and plenty of Lone Star ingenuity.