Here’s a coming-of-age story that’s not made exclusively of words nor exclusively of images, but of those two things in masterful combination. A graphic novel, yes. It’s called Spinning. 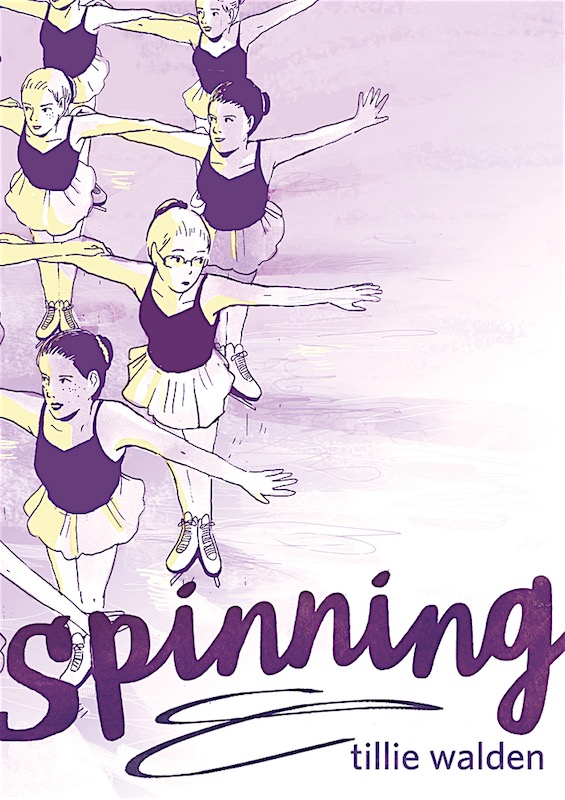 (Figure skating, right? Which is important even if you’re not interested in figure skating. Because, remember how you weren’t interested in junior-level tennis? And then David Foster Wallace wrote Infinite Jest and suddenly you couldn’t help but give a damn about junior-level tennis, because of how vividly the experiences were related, how compellingly the situations were presented? Yeah, well: Here we are again, fellow nonsportsfans. In a style that’s more minimalist than maximalist, albeit visual, and with the characters not half as weird or complexly fucked up, but still: Just so.)

The author of Spinning is Tillie Walden – a young woman (she’s all of 21) who already has a few ambitious works on the shelves or in the pixels, has already earned a pair of the industry’s coveted Ignatz Awards (for Outstanding Artist and Promising New Talent in 2016). And if sequential art that embodies rich narrative, subtle characterization, and an excellent use of the medium foundationed by much fine-art skill, if that’s your cup of inky tea, reader, then you’ll want to make note of her name. To maybe look for her at the Texas Book Festival this year and get her to sign a copy of Spinning – or The End of Summer – or anything else that she’s committed to publication. Because wow, basically.

Spinning, recently out from First Second in a gorgeous paperbound edition that’s thicker than four iPads and comes with a metal ice-skate charm on its attached bookmarking band, is an autobiographical work revealing the life and times of this sometimes Austinite, circa when she was just a kid and practicing for competitions at that Northcross Mall skating rink some of us may remember. It’s a thoughtful, bittersweet evocation of the turbulence of puberty and adolescence, of first love, of eventual disillusionment with a thing to which someone has devoted so much of their life. And it’s all told in panels of pen-and-ink-and-watercolor images simple and precise enough, with such an elegance of spatial arrangement, that a reviewer could compare it to the early work of, say, Adrian Tomine, and not seem like an idiot. The way those lines on the ice might mirror lines on the page, even when the rink is far behind … The sense of vastness of the performance locations, the depiction of the emotional entanglements among members of the synchronized skating teams …

People, we have a winner: Tillie Walden’s Spinning is a powerful work of real-life storytelling and is highly recommended.

Tillie Walden will appear at the 2017 Texas Book Festival in two sessions: