The firm behind the new library has changed our city's look

The city's Central Library that opened Oct. 28 has generated much buzz for Lake|Flato, the San Antonio/Austin-based architectural firm that partnered on the project with Boston's Shepley Bulfinch. But it's just one of many major projects here that Lake|Flato has designed – projects that have changed the look of the city in the 21st century. Where the glass towers that dominate Austin's skyline, crowding out last century's architectural signifiers, the Capitol and UT Tower, might seem to be the buildings that represent the New Austin, in truth they bear little relationship to the city – to its landscape, its history, its culture, or its aspirations. At best, these sleek skyscrapers provide spectacular views of the city and surrounding countryside, and their mirrored surfaces reflect the Austin in which they're planted like shiny stakes from some giant surveyor. But what they really reflect is a late 20th century sensibility of what buildings should look like in a metropolis, and it's a sensibility that owes more to East Coast urban centers than our region. Lake|Flato's buildings, on the other hand, are integrated with this region and the environment, through the use of native materials, human scale, openness, and rural building traditions such as porches and breezeways. Consequently, Lake|Flato buildings appear to belong here, which makes them more inviting and welcoming, and they seem more likely to age well. And given the attention the firm pays to green practices and sustainability – it's received 10 Top Ten Green Project Awards from the American Institute of Architects Committee on the Environment and earned the Global Award for Sustainable Architecture in 2013 – those Lake|Flato buildings look likely to last a long time.

Over the past two decades, the celebrated firm (more than 270 design awards, Texas Medal of Arts recipient, Interior Design Hall of Fame inductee, recently named one of the Ten Most Innovative Architecture Firms in the World) has been a part of numerous defining projects in the Capital City – defining in the sense of each being located in a prominent part of Austin or involving a prominent institution. The Central Library is one. Here are nine more:

Mary Ann Heller Opera Center (2000) Although Austin Opera sold this building in 2012, it made a dynamic first home for the company, refashioned from a restaurant into a striking three-story structure with offices and rooftop garden connected to a one-story structure with practice rooms, recital room, electronic music multimedia center, and rehearsal hall. This was among the first buildings in the city's cultural makeover that included the Long Center, the Emma S. Barrientos Mexican American Cultural Center, the Blanton Museum of Art, and Zach's Topfer Theatre. Hotel San José (2000) By remaking this faded 1930s motor court and haven for illicit activities into a spruced-up hotel with tile roofs, arches, arbors, porches, and abundant outdoor communal spaces, Lake|Flato not only breathed new life into the building, it also provided a major step in the transformation of South Congress into the bustling high-end destination it is today. 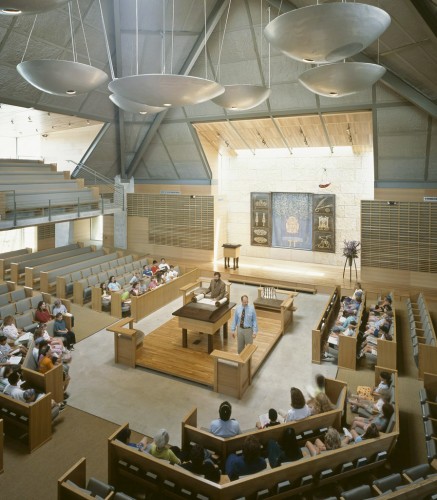 Agudas Achim Synagogue (2001) A soaring 40-foot ceiling recalls the tabernacle tents of ancient Judaism while creating a modern vehicle for light to feed into the sanctuary, with skylights and clerestories creating ever-changing patterns of light across the cantilevered concrete balconies and limestone walls. This project on the Dell Jewish Community Center campus was also one of the city's first religious structures to be designed and built in the 21st century.

Harry Ransom Center (2003) When the Ransom Center's collection of art from Mari and James Michener was moved to the Blanton Museum of Art, Lake/Flato was free to reinvent the HRC's lower floors with new galleries, a reading room, a viewing room for art, and a theatre. It also broke open the bunker-like facade and installed two-story windows etched with images of items in the center's literary, art, and film holdings, making the exterior more welcoming. 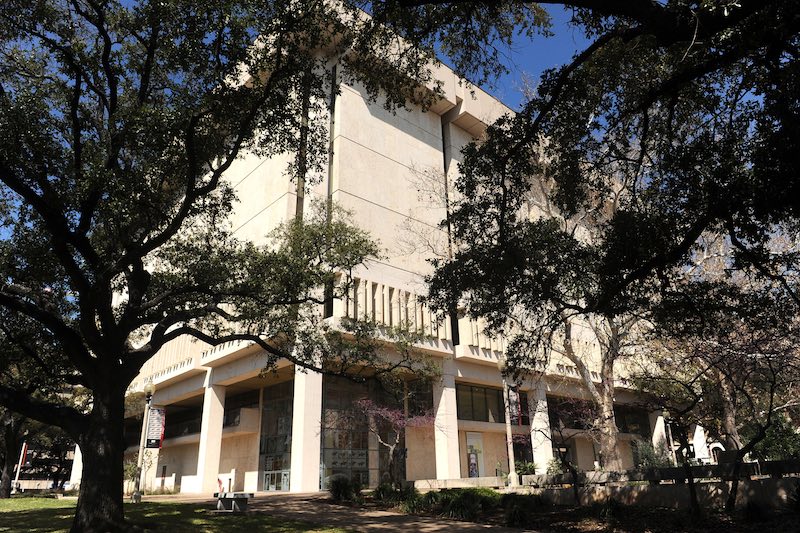 UT AT&T Executive Education and Conference Center (2008) In providing the Forty Acres with its own hotel and conference center, Lake|Flato designed a massive modern facility – LEED Gold certification for 322,000 square feet, containing 300 rooms, seven tiered classrooms, multiple breakout rooms and conference rooms, a 300-seat amphitheatre, and an 800-seat ballroom – but centered it all around a communal outdoor space: a courtyard accessible from all primary public spaces. Monumental arches throughout the brick-and-stone structure also add a sense of classical grandeur. 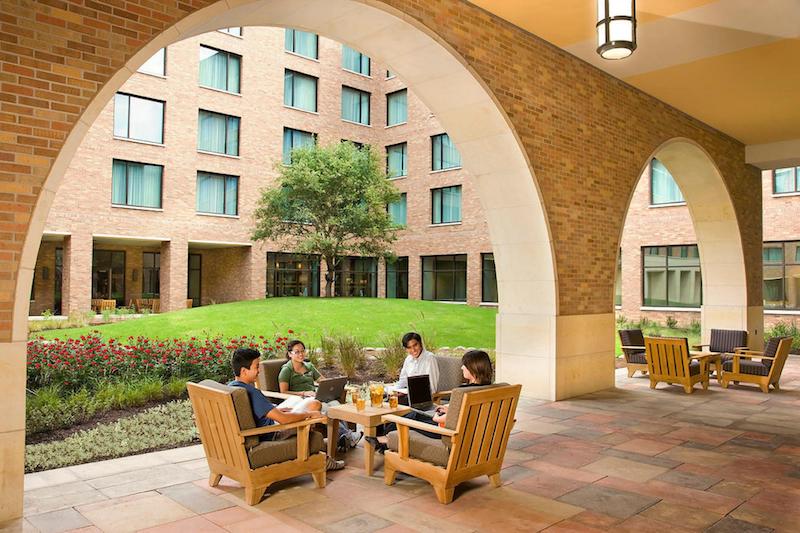 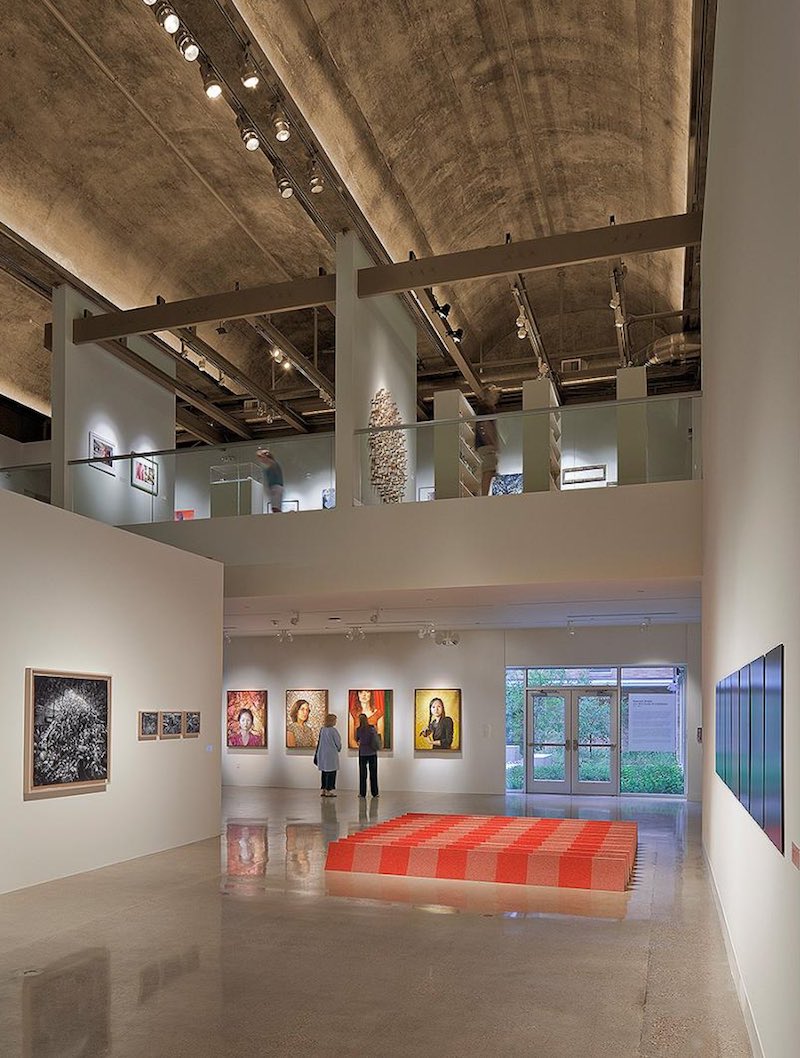 UT Visual Arts Center (2010) As it did with the HRC on the opposite side of the UT campus, Lake|Flato broke open the Sixties-era bricked-up former home of the Blanton Museum and let the sunshine in. New windows brought natural light into the exhibition galleries, which also saw the original vaulted ceiling uncovered. A shaded and landscaped east entrance was created out of a loading dock, and old classrooms were repurposed into new studios and offices.

Livestrong Foundation Headquarters (2010) Working from the Fifties-era Gulf Coast Paper Co. Warehouse in East Austin, Lake|Flato used clerestory windows to bring light into the interior, much of which is broken up by freestanding wooden "boxes" that serve as offices and meeting rooms. The warmth from additional reclaimed wood used for walls and benches offset the coolness of the concrete, and large windows and an open-air courtyard adds a connection to the environment. Cirrus Logic headquarters (2011) A wealth of tall, thin vertical windows separated by horizontal zinc panels distinguish this sleek six-story structure on Shoal Creek at Sixth & West. Inside, exposed metal ductwork and timber beams and columns (some of them reclaimed from a 19th century New Hampshire farmhouse) continue the exterior's appealing contrast of cool and warm, adding to it a push-pull of present and past. As the headquarters for a global semiconductor firm, the look speaks to modern Austin, but its human scale keeps it linked to the city as it has been. H-E-B Mueller (2015) The Mueller development, built on the site of the former airport, is one of Austin's first attempts at constructing a mixed-use urban villages for the new century. Lake|Flato contributed to the effort with a grocery store of the future, one extremely sensitive to the environment and sustainability. Among the features of the 83,587-square-foot store are a "Texas-sized" entry vestibule that draws out excess thermal load and exhausts it out the top; a white ceramic coating for the roof to reflect and reduce heat; 600 rooftop panels to provide enough power to light the store; north-facing rooftop skylights and clerestories that bring natural light into the store; an innovative propane refrigeration system with zero ozone depletion potential and low global warming potential; a rain garden to capture runoff from the parking lot and slow its flow into the city system. Of course, Lake-Flato have also designed it with their signature sensitivity to communal spaces, spreading them throughout the store and giving special attention to the cafe. The success of the store has encouraged H-E-B plans to use it as a model for other outlets. Of course, this is far from the end of Lake|Flato's impact on the look of Austin. As you read this, the firm is working on three projects in the South Congress area that may prove to be as transformative as the Hotel San José was: Hotel Magdalena, another boutique hotel from Liz Lambert's Bunkhouse Group that will sit cheek-to-jowl with Lambert's Hotel Cecilia; St. Vincent, a three-story office/retail building on the site of the former St. Vincent de Paul resale shop; and the Music Lane development, the somewhat controversial 140,000-suare-foot mixed-use office and retail project that will go up on the block of South Congress where a number of beloved small businesses (Twomey Auto Works, Sfanthor House of Wax, Wet Salon, Strut, Ignite Fitnez, Parts & Labour, Doc's Motorworks) operated for a number of years and were forced out. Construction is underway, and these projects are expected to be completed during the next year to two years.