Welcome back to the 12th Precinct, citizen, where Detectives Harris and Yemana and Wojciehowicz and Fish, et al., are dealing with the fallout of Mike Pence’s America – in Gotham City. 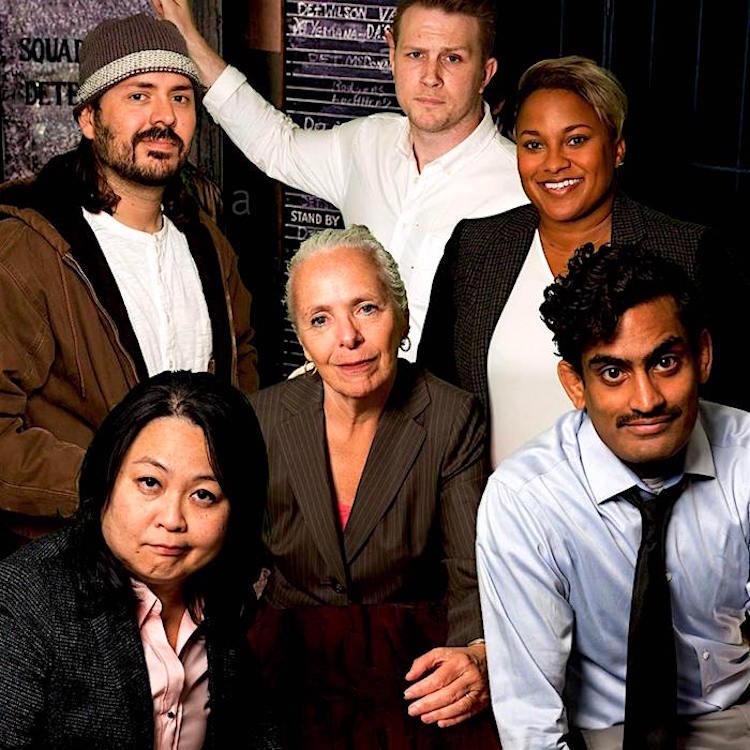 The distinctly non-super detectives of the 12th Precinct

Yes: Gotham City. In 2019. Where a certain caped vigilante is little more than an offstage pain in the police-procedural ass …

“We’re using actual storylines from the TV show,” says ColdTowne Theater’s Dave Buckman, director of the hybrid sketch/improv show called Barney Miller Dark Knight, a production that mashes up the old ABC sitcom with DC Comics’ Gotham Central sort of action. “I wrote a draft from the scripts, from the actual ‘Barney Miller’ teleplays, so there’s maybe five different episodes represented in the show. And the cast improvises on top of that – they memorize the dialogue, learn the blocking, and then they take it from there. Once they’re off-book, they’re allowed to improvise. And they darken the tone a little bit, add in some Dark Knight stuff, casually mention Batman here and there.”

The show is set to run at ColdTowne every Saturday night at 7pm for the next six weeks. But there are no actual superheroes in it, right? No, like, weaponized Spandex or Bat Shark-Repellant or whatever?

“There’s no superheroes in the show,” confirms Buckman. “Unless you count Barney Miller – who’s a superhero to me. But I read comics a lot when I was a kid, I had subscriptions to X-Men and Justice League and all those, so I’m familiar with the universe. And I really like the ancillary characters, the background characters of storylines. I’m always watching the second- or third-tier characters more than I’m watching the leads. So what’s interesting to me is, who’s following up on these cases? Certainly Batman’s not the only detective in Gotham – there’s a whole police force.”

And part of that force, the part we’ll see onstage at ColdTowne, are the characters from “Barney Miller.” And while there might be a gender switch or two, the ethnicities of the cast will match the diversity of the original?

“Well, there are certain dynamics,” says Buckman. “Those characters are those characters. I don’t think that if, like, if I whitewashed Yemana – that wouldn’t work. And I wanted to feature ColdTowne’s diversity – ColdTowne has a very diverse talent pool – and ‘Barney Miller’ was ethnically diverse, it was a forerunner.”

But those characters – Wojo and the others – they’re dealing with a whole different situation now, aren’t they?

“Yeah,” says Buckman, “there’s not a single cop on the force who hasn’t lost about a dozen partners to death. So, if you’re in the squad room, you’re a survivor by nature – and you’ve become hardened by seeing friends getting killed in front of you. And they’ve got some resentment against Batman, too, because they’re trying to do their job, they’re trying to do detective work, and, like it or not, come nightfall, Batman’s gonna solve that crime – if he chooses that crime to solve. So they get to the point of, ‘Let’s not even tell Batman, let’s try to solve this before sundown.’ So there’s this pressure to do their job around this fucking vigilante who keeps trying to do their job for them, who keeps showing them up. It’s fascinating.”

And it’ll be fascinating for six weeks?

“At least six weeks,” says Buckman. “Hopefully longer than that, but that’s where we’re starting. My dream is that it does for ‘Barney Miller’ what the Annoyance Theatre did for ‘The Brady Bunch’ in the Nineties – just revives the whole franchise. My dream is that Barney Miller Dark Knight starts that process.”

Could that – or even one-tenth of that – be an actual thing? Might the theatregoing universe have, what do the cops call it, probable cause?