Rhea Butcher and Cameron Esposito on life as a comedy couple 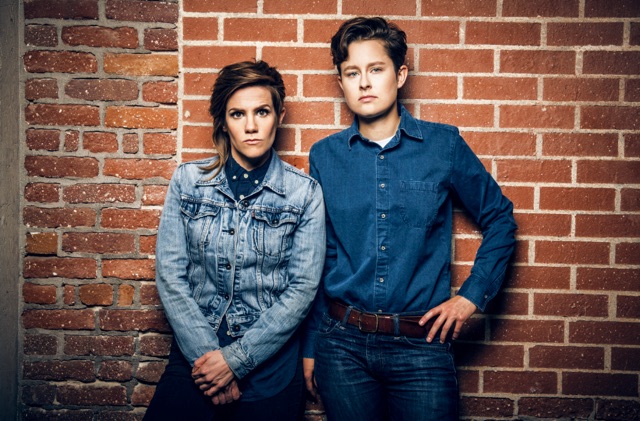 Wife. It's not just another noun when it comes to comedians Rhea Butcher and Cameron Esposito, currently on a 16-city tour that stops at the Stateside in Austin on Fri., Sept 29. The word was right there in the title of the pair's recent Seeso comedy series, and it’s made them role models in the LGBTQ community.

There’s a September 2016 Instagram video of them that ended up getting a lot of traffic on Tumblr and other social media platforms. Shot by Esposito, it features Butcher puttering around the kitchen of their L.A. home looking peeved. While Esposito is out of frame, you hear her ask, “Hey, why did I just get in trouble?” Butcher takes a second to compose herself before responding, “You’re not in trouble – you’re my wife. But you didn’t think you had to cook noodles.” The video goes on a little bit after that, but that first phrase was what so many viewers clung to: “You’re not in trouble – you’re my wife.” Not revolutionary in and of itself, something of the flavor of I Love Lucy, in fact, but earth-shaking and life-affirming to hear from the mouth of one real-life married lesbian to another.

Butcher and Esposito have made a life of turning the ordinary into the extraordinary. Every week, they co-host a stand-up show at the Upright Citizen’s Brigade Theatre in L.A. (Put Your Hands Together, also available as a podcast for fans across the country) and open almost every show with a discussion about household minutiae that is delicious in its warmth, informality, and immaculate timing. They’ve fictionalized the details of their early relationship and Butcher’s start in stand-up with the aforementioned TV show, Take My Wife (which debuted on the ill-fated comedy streaming site Seeso and is currently searching for a new home for the as-of-yet-unreleased Season 2). Esposito’s newest project is the podcast Queery, which offers one-hour conversations between herself and other LGBTQ artists about matters both monumental (discovering and navigating gender identity and sexuality) and mundane (how to dress authentically when you’re a woman who is stylistically on a tomboy-butch spectrum and you’re pregnant, as in episode 10 with Evan Rachel Wood).

In advance of the duo's performance in Austin, Butcher and Esposito were kind enough to speak to the Chronicle about the thrills of uncharted territory and the loss of Esposito’s famous mullet.

Austin Chronicle: Cameron -- we’re now a few days into the big haircut! How’s it treating you?

Cameron Esposito: [Laughs] Rhea, what do you think? What’s the current review?

Rhea Butcher: I think it’s settling in nicely. It’s a great new addition to the family. You know, missing the side mullet somewhat, but happy to be in this new era of Cameron.

AC: So I know you’ve done tours together, but Back To Back is your first bus tour, and I’d love to hear what specifically about this type of travel is exciting to you guys? I think you mentioned on Put Your Hands Together that the bathroom situation is not super great on the bus.

RB: … Does The Austin Chronicle want to know the deets?

CE: You can’t poop on the bus!

RB: [Laughs] Yeah, that’s a big bummer. You know, we’ve done this many cities together before, but it’s usually over the course of like, you know, six months. So this is nice, you know, to go out and see people in one month! It’s pretty fast-paced compared to what we were doing.

AC: What are y’all’s respective travel styles? Like, are you all about finding hole-in-the-wall places or … ?

RB: Sure! I’m a big fan of – I like to go to a city and I like to find a diner, 'cause that’s where you can see a good mix of everybody who lives there. I like to start out with a diner, and then I like to, you know, hit up the local record stores – basically, just like local small businesses, clothing stores. I met some really amazing people throughout the country going into those places, in like, St. Louis and in Richmond, Virginia. And then you’re supporting a local community, and can see what’s going on in that town. Cameron?

CE: Also – you want me to get Austin-specific?

CE: It feels like a river. That’s the first thing I’ll say. You guys straight up do not know what a lake looks like, and that’s okay. I mean, okay, I know this is not new stuff, but here’s the things I have done in Austin in the past. Like, obviously, I’ve been to Barton Springs, and I’ve been to the part of it where you’re, like, standing in the water for free, looking at the people who paid to go into the pool part of it. That feels very empowering. I’ve also see your banked track roller derby! Where I’m from, in Chicago, and also here in L.A., we do flat track. Banked track derby is fucking bonkers because of the position of trying to throw women out of the sides of it? So good job. Also, we’re vegetarians, so that’s like a huge bummer obviously, because all of your spots that everyone wants to tell us about are barbeque-based? So if we can get some local, vegetarian recommendations tweeted at us …

AC: So, together and separately, you’ve always both done this really beautiful job of integrating your queerness fully into your stand-up, and then Take My Wife and Queery, and then on top of that, you’re both pretty prolific on social media, and I’ve always been very moved by the way you share these little beautiful moments of your marriage with the world. I think that simple act of visibility brings a lot of joy and comfort to young lesbian and bi women who weren’t necessarily taught that happiness was a real viable option for them. So I wanted to say first of all, thank you for that, and then I’d love to know how you both approach that sense of visibility – what intentionality is there and what that means to you.

CE: It is so intentional. Fully intentional. You know, Rhea and I certainly have a lot of parts of our lives separately as people and parts of our relationship that we keep to ourselves. And you know, a lot of times when people talk about social media, there’s a stigma to the way that it’s sort of designed and thought out, but I think when you’re part of an underrepresented group, there’s nothing wrong with saying, “Hey! We should take a photo of us, you know, at this stadium baseball game, which is traditionally thought of as the, you know, Americana straight white dude haven, and show that this is something we do as a queer couple.” Or, “We should take pictures of each other in the outfits that we feel comfortable in right now, because they’re, like, gender-bending and queer, and share that with the world.” I didn’t get to see this when I was a kid. I am so grateful to people like, you know, Ellen or Margaret Cho, who I watched early in my 20s and then as I started doing stand-up, because they talked about it onstage. But we didn’t have social media! I didn’t know what their actual lives were like. But being able to say, “I want to share this”? It is so powerful and uniting. And I’m thrilled and, um, I’m going to say the word "honored," but I don’t – like, please take me as a cool person still – I’m just honored that I get to be that for some people, like that we get to be an example of what a life can be when you’re happy and out. And Rhea? Top that!

RB: I don’t know that I really can top that, ‘cause I agree with everything that Cameron was saying. To dig a little bit deeper, maybe share a little personal stuff – like for me, I grew up with divorced parents and so I never really saw an example of a relationship, you know? Like a parental one. So I don’t know that I’m even aware of the fact that I’m doing it, but I think that in some ways, I’m posting some of these things to show myself that adult relationships are a thing and they’re hard and they’re also fun and – I don’t know, like representing myself to be like, “Hey, you did it!” But I know there’s not just queer kids, but kids with divorced parents, without examples of people trying and attempting and succeeding and failing, you know. Simple little posts on Instagram – I go to Instagram to see what kind of shirts I can get? So it makes so much sense that you could go to Instagram and see what kind of relationships you could get – we’re all just trying to show each other what we can do.

AC: Thank you so much for taking the time to speak with me. I thought I’d close out by asking: What’s the biggest laugh you’ve gotten out of each other today?

CE: [Laughs] I don’t – I’m sure Rhea made me laugh today – well, first of all, as we’re doing this interview, I just want you to know – Rhea is breaking in a new baseball bat. Like –

CE: She’s been putting like, pine tar on it? And writing her name on a baseball bat –

RB: I broke my bat yesterday at baseball practice so my new bat hasn’t been used and I need to get ready for my play-offs –

RB: So I can’t be putting pine tar on it on Friday –

CE: Yeah, Rhea’s been doing that and I have been making rice and beans. In case you thought we were just, like, well-spoken adults – I am currently chopping garlic. So that’s just a behind-the-scenes. But this past weekend, we had a chance to perform at this music festival doing some comedy there and it was just the first time I’ve actually seen Rhea do a full set in a minute, because we’ve been working on Take My Wife, and it was the first time I had a chance to do a full set in a minute, and you know what? [To Rhea] You made me laugh so hard, I turned to the comic next to me and said, “That’s a good one.” So it’s nice, like, six years in, to still be able to, I don’t know. Be surprised on a daily basis.