The weekend of fannish revelry and indie-comics celebration returns

Here comes the 13th iteration of Staple!: The Independent Media Expo, now having ditched its longtime Marchesa location to release a weekend of fan-mobbed revelry and DIY merch and so much indie-comics-and-related-subcultural-goodness at Austin’s Millennium Youth Center. 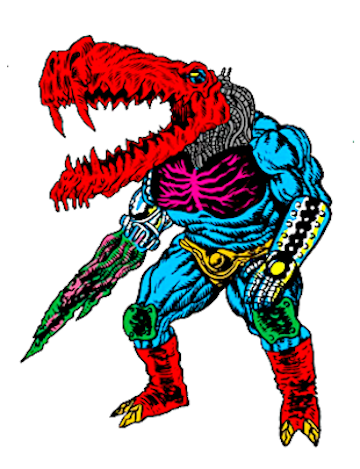 And if you need some boostery harangue to convince you to attend the show – some PR flack making sure you know that Hope Larson (the force-of-nature behind the graphic adaptation of A Wrinkle in Time and the current run of DC’s Batgirl, just to name a couple sweet projects) will be there as a guest of honor, and that Keith Knight (a just-dark-enough knight, really, and the dapper jester responsible for (th)ink and The K Chronicles) will be there, too, as will a bunch of similarly award-winning and personable others, yes – then look elsewhere for that intel, citizen.

Because, sure, the weekend will be filled with celebrated creators and a fine slate of informative panels among the merriment and mafficking of hundreds of your friends and neighbors, and so on – but you can read about all of that on the Staple! site.

[Note: You might also learn, on that site, that your current reporter is moderating a Sunday afternoon panel that features professional horror and science-fiction writers talking about that voodoo that they do. Full disclosure, baby.]

Because I figured that, here in the Chronicle, it was time for a deeper look at the person who fomented this annual event in the first place: Uncle Staple himself.

His name is Chris Nicholas, actually.

He is, unlike so many of us, a native Texan. He’s just past the half-century mark, agewise, and he’s a longtime employee of the State of Texas (imagine Harvey Pekar crossed with Riff Raff, and you’re almost there). He looks like, in the flesh, that he was drawn by Matt Howarth on a meth bender. And he recently sat down with me on the patio of one of his favorite haunts – Epoch Coffee, there on North Loop – and let me grill him about his roots … 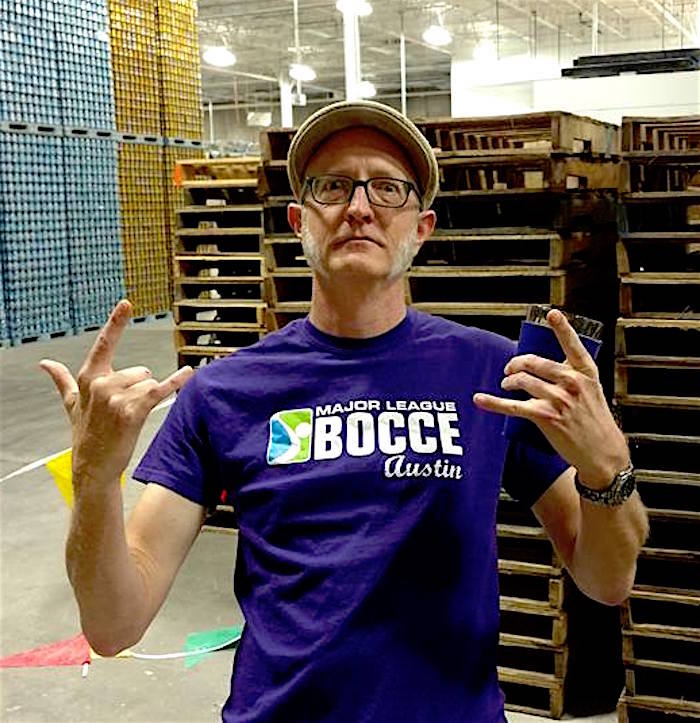 Bow down, citizen, before that bantamweight bastion of bona-fide bocce badassery: Uncle Staple!

Brenner: Where are you from originally, Chris?

Uncle Staple: I was born in San Angelo and was immediately adopted. My adoptive parents had been looking for a baby, and in 1966 they got one – me. My aunt was actually a nurse at the hospital, and she called them and said, “Here’s a baby, come get it,” and they did. And they lived in Odessa, and we were there until 1980 – and then moved to the Rio Grande Valley. I went to high school down there, couple years of college.

Brenner: Where’d you go to college?

Uncle Staple: All over. Freshman year was at Texas’ southernmost college, a junior college in Brownsville. Taco Tech, we called it – Harvard on the Rio. The campus is literally on the river. You can go to class and then walk across and go to Matamoros for lunch. Have a couple margaritas, come back and sneak into class [laughs]. And then, I was still living at home, and we moved to Los Fresnos, which is a little town near Brownsville. Then we moved to McAllen. My dad owned a couple of green-grocer stores, and we shut one of them down – the economy had taken a hit after a hard freeze had killed all the citrus in the valley, so that was rough – and we kept the other one, which was in Pharr, next to McAllen. And then I transferred to UT Pan Am for two semesters – because I’d kind of had enough of living in the Valley with my parents, and most of my friends had moved up to Austin anyway.

Brenner: What were you studying?

Uncle Staple: I was a terrible student. But it was a liberal arts kind of thing, and I eventually wound up with a degree in government and a minor in English.

Brenner: “Government.” Okay, and what was the first comic book you ever read?

Uncle Staple: The first comic book I remember reading – and I’ve thought about it, because I’ve been asked this question before – it was Hot Stuff, the Little Devil.

Brenner: That Harvey Comics character, right? The one that Torchy’s ripped off for their logo?

Uncle Staple: Yeah, that – and Richie Rich. I guess I was, like, 5 years old?

Brenner: And how did you get those comics?

Uncle Staple: My parents gave them to me. When I’d get sick as a little kid, they’d always bring me a comic book. I wouldn’t say I was a sickly child, but I got sick a few times.

Brenner: Especially if you wanted a comic book.

Brenner: So those Harvey Comics, they were like the gateway drug that led you to, ah, Lobo and The Dark Knight?

Brenner: And then Alan Moore’s Lost Girls, sure. It’s a direct path.

Uncle Staple: Yeah! But I didn’t read a lot of comics on the regular, although sometimes my parents would bring me, like, a Justice League or something. The Fantastic Four – I really liked that one. But then I was reading – and I can’t believe my parents let me buy these when I was 11 or so – I was reading Creepy and Eerie magazines, from Warren Publishing? They wouldn’t let me buy Vampirella, it was too sexy. And I wasn’t reading a lot of mainstream comics until I was about 14 or 15 – there weren’t any comic shops down there. But then, when I was 14, I can’t remember where I got it, maybe a grocery store or something, maybe a bookstore, but I had this comic. And, back then, Marvel still had a subscription service, so I cut out the little order form in the back, and the best deal was “Get 11 Subscriptions!” So I picked out some titles – Fantastic Four, X-Men, Alpha Flight, a bunch of others – and started getting them in the mail. And that’s when I really got into comics. Ka-Zar. Marvel Two-in-One, which was always The Thing and somebody else. The ever-lovin’, blue-eyed Thing. [chuckles]

Brenner: And what led you to start Staple?

Uncle Staple: Me and a buddy, David Lamplugh, were making comics. And he was like, “I have this idea for a comic, you wanna help me write it?” And I had nothing else to do, so, yeah. So we started messing around with it, and sat down at Mojo’s on the Drag, back in 2003, and over the summer we just kind of sat there and smoked cigarettes and bullshitted. Which was what we normally did, but this time we did that and bullshitted about the same thing for three months and wrote it all down [laughs]. And that turned into our first comic. And I knew people around town who put out comics – like Tim Doyle, with Amazing Adult Fantasy, and Ben Snakepit, a few other people. And we had ours, and were like, “Okay, now what do we do with it?” And Austin Books & Comics took a couple on consignment. And then we went up to, I think it was the first Wizard World show, in Dallas? And we just kind of walked around and harassed people: “Hey, buy this for a dollar!” And there we met John Rubio, from Austin, and he got us involved in the Austin Sketch Group – and there were a bunch of artists at Sketch Group, and some of them were making comics, and we just met more and more people who were doing that. Some of them had been making comics for a while, and they were like, “Yeah, we go to conventions to sell them.” And around that time there were maybe four or five conventions in the U.S that were for indie comics – and they were way far away. And we figured, “Well, there’s enough people right around here to put on a good show, let’s do it here.” And so we did [laughs].

Brenner: And Staple!: The Independent Media Expo took off and it did surprisingly well. I’ve been writing about the thing and doing short pieces on some of your guests, like Dean Haspiel and Jeffrey Brown, for years. But there was one point, I remember, where you were kind of fed up with the whole thing. You were like, “Fuck it, I’m not gonna do this anymore!” What brought that response about – and what caused the eventual change of heart that’s got you continuing on with the expo?

Uncle Staple: Well, we moved from a one-day show to a two-day show in the same year that the country’s economic crash started to affect Austin. So our attendance, which had been growing and growing and growing, actually went down the weekend we had our first two-day show. And it kind of stayed down for a couple of years. And there was, well, I just had a lot of stuff going on, you know? And by year 10, I was like, “Okay, that’s a good round number, maybe it’s time to hang this up.”

Brenner: And everybody thought it was over.

Uncle Staple: Yeah, well, I’d intimated to a few people that it might be over. I was just kind of burned out.

Brenner: So what happened?

Uncle Staple: Well, it just kind of exploded. Year 10 was the best show we’d ever had, bar none.

Uncle Staple: In terms of attendance, and vibe, and – it was just, like, wow. I’m not sure what the deal was, if the economy was coming back, or it was our lineup of guests – it’s hard to account for why people come. The only time I’ve taken the opportunity to survey people who showed up – I’d connected with a guy who was working on his professorship at UT and he was interested in indie media and how it’s made and sold, and he sent some students over with surveys, it was like their class project – so I was able to get some data back about why people came to the show and how they’d heard about it.

Brenner: What were some of the reasons?

Uncle Staple: A lot of it was being able to connect personally with the artists they were buying stuff from. That interaction – chatting with the artists and writers, getting to know them – was far and above the main thing the people liked. And you can’t get that in a comic book store, unless there’s, like, one author doing a signing or whatever. And I was also surprised, in terms of how people heard about it? Posters and fliers, man. That, and word-of-mouth – they’d heard about it from a friend.

Brenner: And so, since that uptick, Staple’s again increasingly popular?

Uncle Staple: Yeah, it’s – attendance is steadily increasing. Which is why it’s good that we’re at the Millennium Youth Center this year, you know? We definitely need the space.