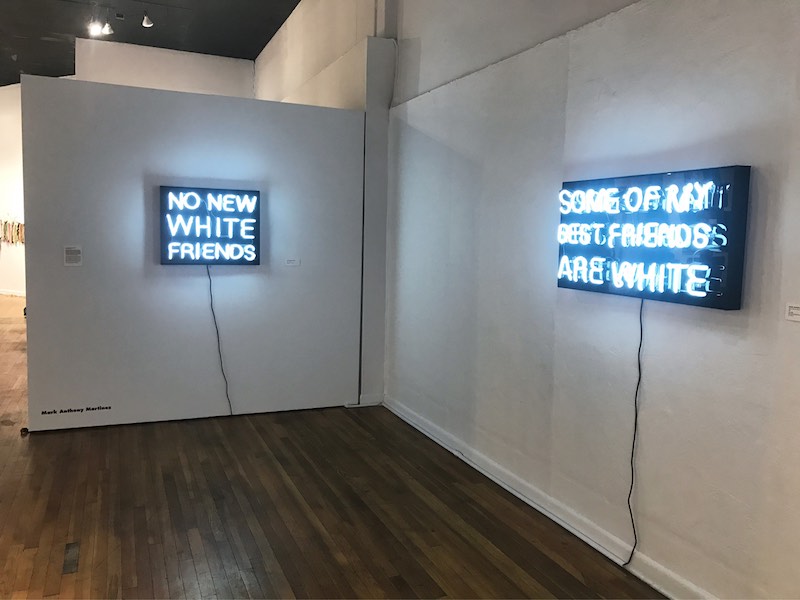 This summer, Mexic-Arte Museum presented its 22nd annual Young Latino Artists exhibition, and it took its usual pride in showcasing work by important emerging artists. But it took an unusual step in declining to present a piece by one of this year's participants on the grounds that it could be construed as supporting white supremacy.

The work in question was by Mark Anthony Martinez of San Antonio. One of three neon signs exploring ideas of whiteness, racial identity, and racism, the piece reads “OFF-WHITE POWER” – “off-white” being a stand-in for “brown” – but the word “off” is not lit. Martinez explains it like this: When brown people are ignorant of their history, the sign is off, and all we’re left with is “white power.”

“When brown people don’t know their history, they basically support white supremacy, because that’s all that we’re given by the U.S. education system,” he says, adding that brown people must make the choice to learn their history: “Ignorance isn’t a pass for complicity.”

However, after Martinez presented the work to the museum, it determined that the "white power" message could be misinterpreted and would not allow it to be shown in the exhibition. “It’s unfortunate because this is a show that’s dedicated to uplifting young Latino artists, and emerging artists, and they’re in a position where they would rather silence,” Martinez says.

Alana Coates, who curated "YLA 22: ¡Ahora!", included some of the youngest in the history of YLA – all between 26 and 31 – specifically for their fresh takes on life and the world. “The younger, they have new ideas – they are coming from different perspectives.”

In maintaining that a piece about white supremacy should not be conflated with support for white supremacy, Martinez pointed to Vincent Valdez's The City, recently purchased by the Blanton Museum of Art. In depicting Ku Klux Klan members, Valdez shows their presence in today's world, a reality all too often ignored. It asserts white supremacy's ubiquity – it is not a celebration of white supremacy.

In a joint conference call, Coates and Martinez fought to keep the piece in the exhibition, but to no avail.

“I was extremely disappointed,” Coates says. “I was very upset about it. They were uncomfortable. They were nervous about the image being misread into something negative, that maybe every patron or the average patron walking in might not have the visual literacy needed to decipher the piece.”

Coates suggested pairing the piece with some written literature to provide context. What is a museum if not a place to learn? She pushed for raising the people to the bar, instead of lowering the bar to the people. But even after Martinez wrote an extensive piece about his work and Coates translated it to a third grade reading level, the museum stood by its decision not to include the work in the exhibition, though it did allow Martinez's two other neon signs to be shown: one stating “NO NEW WHITE FRIENDS” and the other “SOME OF MY BEST FRIENDS ARE WHITE.”

“Alana and I were really hoping that within the context of where we are as a museum, where I am in terms of complexion, and basically in conjunction with the other pieces, that it would be really hard to construe it more as a pro-white supremacy piece," says Martinez. "But the museum didn’t see it that way.”

In the exhibition, the wall where the original piece was to be mounted is left blank, except for a placard that reads: Mark Anthony Martinez/ White Wash: a Readymade/ 2017/ White latex interior paint/ 14’ x 9’7”.

Requests for comment from Mexic-Arte were not returned by press time.

Because the artist and the curator believe in the power of the neon sign's message, perhaps even more now that it has deemed problematic for most viewers (even if that’s based on a mistaken perception), the piece will be in a response show this winter. Coates has already secured a venue, and details will be released in time. "It’s a piece that needs to be seen," Martinez says. 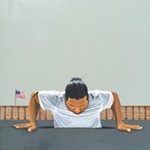