Five Arty Things to Do This Weekend

You know, after you’ve told the usual fascists to go f*ck themselves

Even if the worst thing you’ve had to punch all week was the timeclock, ah, how refreshing to have these options available for supplementing the potential joy of your leisure hours … 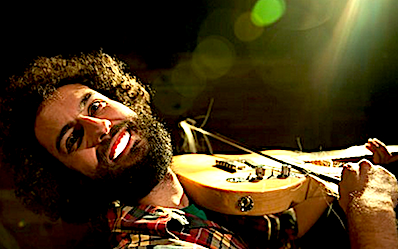 And here's that Noel Gaulin, fiddling up some stringy goodness among the Paper Chairs

1) PAPER CHAIRS: SEASON OPENING PARTY Because indie theatre sometimes hits the spot – and when it’s the gothically inclined Paper Chairs, it’s one of those times, generally. And when they’re staging a performance-spiked party flowing with beer and vodka and (let’s say especially) absinthe, and that party is set among the progressive architecture of Pliny Fisk’s Center for Maximum Potential Building Systems? We reckon there’ll be plenty of spot-hitting among the thespian thaumaturgy this Saturday night.

2) AUSTIN ART GARAGE: 10-YEAR ANNIVERSARY PARTY Yeah, there’s a party here, too – on Friday night. And you know this place is already worth a visit when there’s nothing going on but the sweet array of local art on the walls, the displays of vivid-photography-of-Austin-and-environs rendered into the form of tiles or postcards or T-shirts and only Joel Ganucheau knows what else … so imagine how the joint will be jumping when they get this birthday bash on in their newly expanded space right offa South Lamar, with Sari Shryack’s new paintings front and center.

3) KAREN HAWKINS & KOICHI YAMAMOTO @ GALLERY SHOAL CREEK Say, how about a somewhat calmer event for your consideration this Friday night, something with a more, ah, delicate complexity than beer-fueled revelry? Sound good? Then you’ll want to meet the artists responsible for this series of deconstructed books and bookforms, these sublime examples of intaglio on kites, and other such printerly gambits. Especially as they’re in Gallery Shoal Creek, and Gallery Shoal Creek is part of the Flatbed Press complex – and that Flatbed has a sharp new web presence designed by the graphic wizards of Recspec. (Okay, that last part was a bit tangential, yes. But: It’s all of a piece, citizen, it’s all of a piece.)

4) WE MIGHT BE STRUCK BY LIGHTNING Anyone familiar with “personal journeys of love, loss, depression, and redemption” – and who among us isn’t, if they’re more than five months out of the cradle? – anyone, we say, will likely dig this dance-enhanced chamber opera wrangled by Rebecca Herman, Peter Stopschinski, and Rebecca Whitehurst, replete with classical compositions and unleashed within the soaring angularities of the Mexican American Cultural Center this weekend.

5) SURE THING: MICHEAL FOULK We know, we know: We already recommended the Sure Thing comedy showcase last week, right? But we’re not playing favorites here, okay, we’re not “in the pocket” of ST honchos Duncan Carson and/or Brendan K. O’Grady or anything like that. [Not that that would necessarily be a bad thing; word on the street, those are some rather comfortable pockets to be in at the end of a long day … whatever that might mean.] It’s just that, well, once again it's the headliner of the stand-up show this week: Micheal “My First Name Is the Bane of All Proofreaders Living or Dead” Foulk. Dude can make you laugh big time. Dude can make you laugh until your goddamn lungs fall out. And we hear he’s leaving Austin at the end of summer, too, the quisling jagoff – so you’d best catch him while you can.

What to do in Austin, Weekend Events in Austin, Art-related program activities in the Texas capital, good times, baby