The late writer-actor left lots of himself in Central Texas The passing of Sam Shepard on July 27 was a monumental loss to American theatre and cinema, for which he produced many enduring stage plays, screenplays, and film performances. But Central Texas will be central to keeping his flame alive in years to come, as major archives of his work are held at Texas State University and the University of Texas.

The Wittliff Collections at Texas State in San Marcos is home to 27 boxes of Shepard materials, covering his career during the Eighties and Nineties, as well as an additional eight boxes that focus on Shepard's four-decade friendship with Johnny Dark, the father of Shepard's first wife, O-Lan Jones. The Harry Ransom Center at UT houses 30 boxes of its own, stretching from 1965 to 2011, but chiefly focuses on the periods of 1983-87 and 2001-09.

Between the two, you'll find manuscripts and typescripts for almost all of Shepard's masterworks, including the plays True West, Fool for Love, A Lie of the Mind, and the Pulitzer Prize-winning Buried Child, and the films Paris, Texas and Far North, plus correspondence, publicity materials, and reviews related to those works. Each collection also contains copious materials related to less familiar works, such as Kicking a Dead Horse, Eyes for Consuela, and The God of Hell; notebooks full of preliminary materials for completed works; press clippings; and a treasure trove of correspondence, with missives to the likes of Woody Allen, Marlon Brando, Joni Mitchell, Tom Waits, and Wim Wenders.

Shepard's connection to the region dates back to 1980, when he was cast in the film Raggedy Man, written by pioneering local screenwriter Bill Wittliff. The two hit it off, and in 1986, when Bill founded the Southwestern Writers Collection with his wife Sally Wittliff at what was then Southwest Texas State University, he naturally turned to Shepard for a contribution. Shepard reportedly liked the idea of an archive devoted to writing about the region, and in 1992, he began making donations to it – typically, driving down to San Marcos from his home in Kentucky with a bunch of boxes in the bed of his pickup. The Sam Shepard & Johnny Dark Collection was purchased in 2011, and it has already been the basis for a documentary film, Shepard and Dark (2012), directed by Treva Wurmfeld, and a book from UT Press, Two Prospectors: The Letters of Sam Shepard and Johnny Dark, edited by Chad Hammett.

In 2006, the UT Libraries added to the regional holdings of Shepardiana with a large acquisition of his papers for the College of Fine Arts Library special collections. Included were not only gems such as manuscripts for the 1972 play The Tooth of Crime, the 2005 screenplay Don't Come Knocking, and the 2002 story collection Great Dream of Heaven; film scripts for Black Hawk Down and The Assassination of Jesse James by the Coward Robert Ford; eight of Shepard's Obie awards; and volumes from Shepard's library, including his personal copy of Buried Child, which became the nine-millionth volume held by the UT libraries.

Four years later, that collection was transferred to the HRC, which has added to it since then papers purchased from a special collections library at the University of Virginia and material obtained from Shepard himself.

It's hard to imagine two spots in such close proximity as Texas State and UT with more of Shepard's materials. That's sure to keep his fans and scholars making pilgrimages here – and maybe even keep his ghost wandering over this part of the Southwest – for a long time to come. 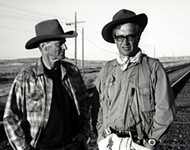