Drink to Me Only With Thine Lies

Those classic club tales tantalize, whether you’re sober or besotted

You want to go to a place where everybody knows your name?

That’s your house, right? Where you live?

Dollars to donuts, citizen: Everybody in your house – unless you’re being, what, burgled? – everybody there goddamn well knows your name. 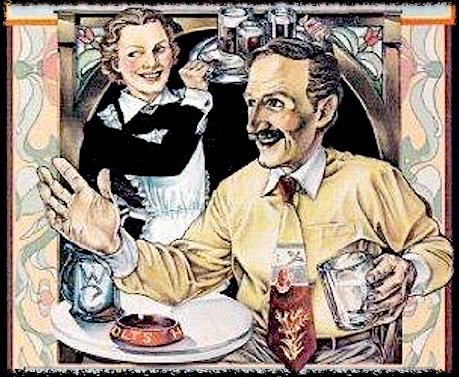 Cover illustration for Avon Publishing's 1979 edition of The World of Mr. Mulliner by P.G. Wodehouse.

But, no, okay: We know what that famous theme song meant. We know, if only because Cheers was not just the name of the show but also the name of the bar in which the American sitcom’s weekly episodes took place from Sept. 30, 1982, to May 20, 1993.

And we know that some people are regulars at such joints in real life, are known to the people behind the bar and the other people in front of the bar – because it’s like their home away from home.

And we also know that we, ourselves – or, technically, I, Brenner, the journo writing this article – I don’t spend a lot of time in bars.

Or if I didn’t because I’d been through the wringer of alcoholism and was now in recovery and so had garnered a sort of patina of grisly elegance due to my experience. Was all tempered, steelwise, by the inferno of addiction. A well-honed blade of humanity, now cutting through the world’s relentless bullshit with the razor edge of my personal suffering sort of thing.

Yo, Ennet House, where my alligators at?

But, yeah, no: I’m just some aging schmuck who, although I appreciate a dram or two of good scotch and really like that hard cider stuff and maybe a pint of Guinness, and I even enjoy some of what might still be called “girly” drinks – I’m a guy who never took well to frequent alcohol consumption. Much preferring, back in the day, just a little weed and a little more acid.

(“You get drunk,” I once summed it to my son, “you get stupid. You get stoned or you drop acid, the world gets stupid.”)

Also, I have … issues with people, you know? In gin mills or in general. Just a touch of agoraphobia, a certain shade of twitch on the spectrum, which I’ve learned to pretty smoothly conceal in the interests of Getting My Job Done.

So, fuck those bars.

But when I’m home, instead of hanging out in some bar, or when I’m sitting in a coffee shop somewhere, I sure as hell read about bars a lot, don’t I?

Don’t we all, sometimes?

Because not only do the plots of all kinds of stories sometimes wind through or wind up in the odd drinking establishment, there’s also a rich vein of fiction in which the narrators spin their spiels from within the familiar confines of a neighborhood bar.

“Club tales,” these things are called. And the ur-version of them is probably Lord Dunsany’s Jorkens stories.

Lord Dunsany – Edward Plunkett, when he was at home in Ireland’s longest-inhabited house – is that early 20th century author of fantastic literature whose The King of Elfland’s Daughter I recently read by way of tangential research for a novel I’m currently kicking out the jams of. And come to find out he’s also responsible for more than 150 short stories featuring an old raconteur named Joseph Jorkens, a habitué of Dublin’s Billiards Club, who never fails to hold forth – in exchange for a tipple of whiskey – on all manner of incredible adventures from his youth.

Several of these stories relate tales of Africa – improbable safari-based hijinks and the like – clever exaggerations of the sort of experiences that Dunsany himself weathered in his younger years. The majority of the narratives, though, are more along the boggart-haunted routes of outlandish stuff that – well, look, you can see for yourself in this fancy volume from Night Shade Books.

This gambit of Dunsany’s, of having some Blarney-blessed brahmin of braggadocio enjoyably regale the patrons of a public house, proved successful enough to spread like gin blossoms across the face of popular fiction.

And, if fantasy or sci-fi is among the preferred flavors in your mind’s cabinet of wonders, how fortunate that the club tale is an especially vigorous trope therein – as represented by Arthur C. Clarke’s Tales From the White Hart, Larry Niven’s Draco's Tavern stories, and (a particular favorite of my dear wife) Spider Robinson’s various Callahan’s Place collections. Among others.

Or, if you prefer the more mundane but nonetheless riotous affairs of everyday mortals in combat with life, love, and where to find a passably decent cocktail while gadding about the metrop, then – what ho, citizen! It’s P.G. Wodehouse and his Mr. Mulliner of the Angler’s Rest to the rescue of your club-tale-hungry predicament!

And so on like that, providing hour after hour of vicarious pleasures whether you’re drinking or not, until it’s time for last call at your local library.

Which library, these days, likely resides within your favorite net-connected device, right?

And which, as long as the power grid’s intact, never shuts down.

And which also, albeit in a distinctly nonhuman and dispassionate manner? Always knows your name.

Who Will Help the Hospitality Industry? And Who Else Has Closed?
Here's what's happening in the Austin culinary scene right now