Watching eight people perform publicly when they've all been awake for 45 hours might seem a cruel way to spend a Sunday afternoon. Aren't you just there to see those exhausted husks of humanity self-destruct? Not at Hideout Theatre's 48-Hour Improv Marathon; their eight were so whip-smart and quick-witted, they left you feeling dazed. 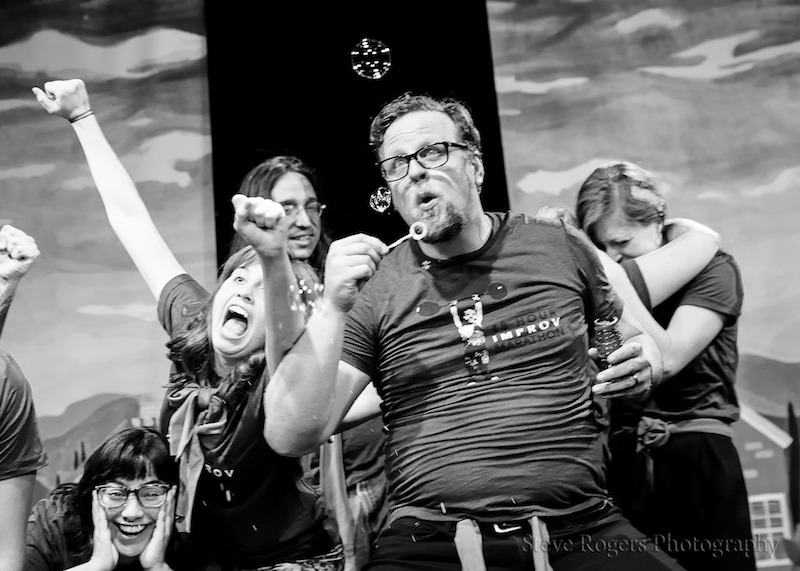 I feel sure that at other points during the two-day endurance test, one or more of the daredevil improvisers – Ryan Austin, Katie Dahm, Margaret Hunsicker, Yamina Khouane, Craig Kotfas, Patti Stiles, Rob Yoho, and J.R. Zambrano – must have suffered some sort of mental malfunction or perhaps even a total system crash, but by the time they took the stage for Hour 46's format, Peter Pan and the Great Unknown, the entire octet had gotten its second wind (or third or fourth), and they engaged in an improvised tale of Neverland with all the brio of Kaci Beeler's Peter. The format, which had a successful run on the Hideout MainStage this past fall, divides the improvisers into three groups: the Lost Boys, the Neverland fairies, and the pirates, each of which gets to establish its characters and some element of the story separately before they begin to interact, and players randomly break out of character to provide J.M. Barrie-like narration that nudges the tale forward. 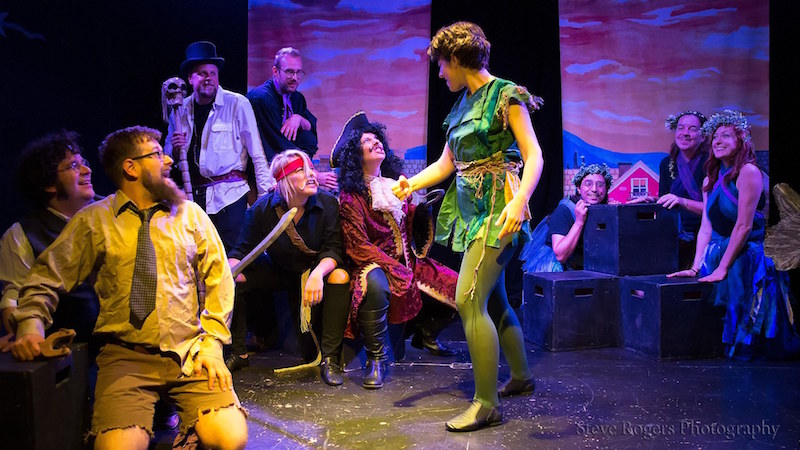 This performance sailed along quite entertainingly on just the character bits cleverly spun off from what we know about Peter Pan and company – a glum Peter wound up talking to the croc with the ticking clock in its belly, and who knew the reptile would turn out to be a therapist so effective it would have shamed The Sopranos' Dr. Melfi? – but then the story took an unexpected turn that was inspired: Captain Hook convinced the fairies to share their pixie dust with him, so he could fly like Peter. It made spot-on use of the source material, with Marathoner Patti Stiles – a bona fide improv legend who traveled from Australia to take part in the Hideout event – filling out the character of Hook with relish, including a heretofore unknown fascination with Kafka's "A Country Doctor." The gift of flight took Hook and Peter not only into new territory together – literally, the sky – but it gave them space to discover a character trait they shared: a love of stories – and their own story ended with the two continuing to meet in secret to swap tales with each other. It was a conclusion that felt so thoroughly satisfying and so true to the characters that you almost couldn't believe it wasn't thought out in advance. That's how sharp and in command of their skills these improvisers were near the end of their two-day slog. 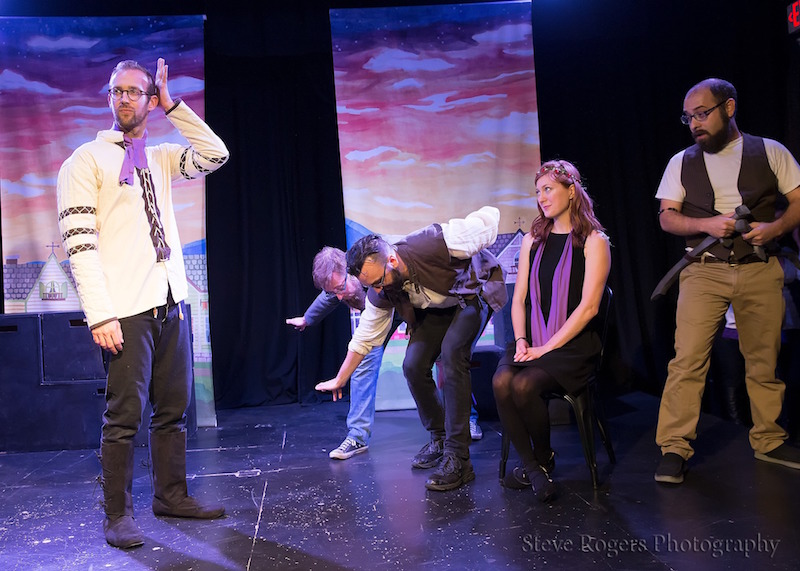 That was followed in Hour 47 by Fakespeare, an improvised play in the style of Shakespeare, challenging the players to not merely conjure a cohesive narrative that felt reasonably Bardlike, but do so in iambic pentameter (well, most of the time anyway). As in the other hours throughout the Marathon, guest improvisers joined the eight who were performing the full 48, but if you didn't know which was which, you wouldn't have been able to tell who had been to sleep the night before and who had been sleepless for two nights running. Case in point: Marathoner J.R. Zambrano, who had taken on the role of Chorus for one scene and was providing the exposition when non-Marathoner Andy Crouch challenged him to deliver the rest of it in rhyme, and he did it without breaking a sweat. The international intrigue of The Rodent Prince (the title suggested by the audience) did grow a little confused – was the royal alliance turned war between France and Wales or England? – but otherwise, the improvised Shakespeare held together and was terrifically fun 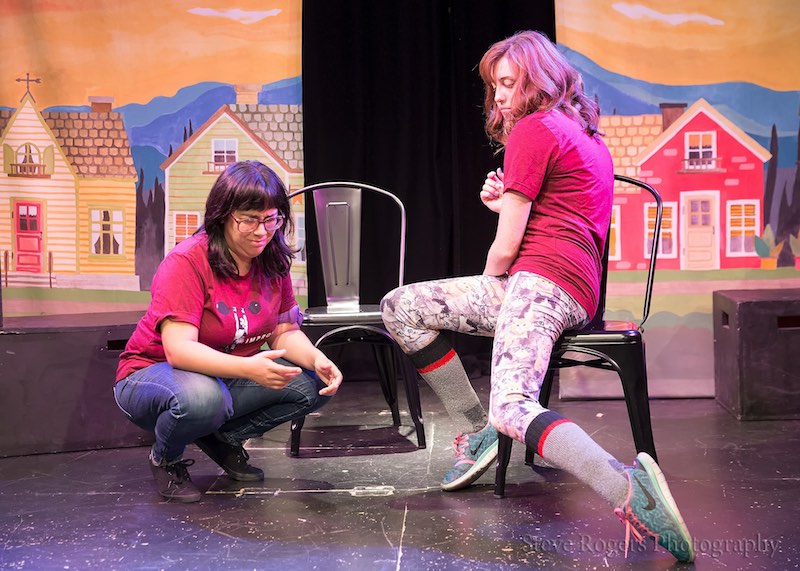 In the ultimate hour of the 48-Hour Improv Marathon, the valorous eight were left to their own devices, to wind things up however they wanted, and they promptly launched into a series of four two-person scenes. If Zambrano, Yoho, Stiles, Kotfas, Khouane, Hunsicker, Dahm, and Austin weren't already my new comedy heroes, these scenes would have made them so. There were rich little moments between characters with fully developed relationships that were revealed to us in organic fashion. When Kotfas and Stiles took on the characters of actors backstage after their final performance in a six-year run, the history between them was tangible, and the surprise was how the scene built not on the comic egos and jealousies that would be easy to exploit in a scene about actors, but on their sincere admiration for each other's talents. The honest sentiment and tenderness was rare for this kind of show. Funnier – but just as honest – was the scene between Hunsicker as a cranky kid stuck with her misfit lonelyheart aunt, played by a deliciously deadpan Khouane. The level of detail they built up piece by piece was a testament to their keen listening skills, still working at the highest capacity after 47 hours nonstop. That was equally true for Dahm and Yoho, who constructed a surprisingly sweet morning-after dance between co-workers with Yoho as the out-of-towner visiting Ohio and Dahm the Columbus citizen with whom he's now smitten. They embraced the innocence of the characters and their fondness in a way that grew endearing with each exchange. By contrast, Zambrano and Austin built their scene on friction as a pair of bristling military types on a spaceship. Austin got off what may have been the most genius line of the afternoon when out of nowhere he declared, "It's not so much being clones that I mind, but the fact that you're a captain and I'm a lieutenant." It gave context to all the disaffection in his character up to that point and gave the scene a galaxy of new territory to explore, which Zambrano rocketed into. In all four scenes, the pace was relaxed, the exchanges effortless, and every line, every gesture, moved the scene forward, gave the other players some new opening, somewhere new to take the scene. That's a pleasure to see anytime improvisers in top form are playing together, but to see it in improvisers at the end of a 48-hour marathon performance was the stuff of magic. Congratulations to these eight for not just surviving the marathon but crossing the finish line by showing us how it's done. 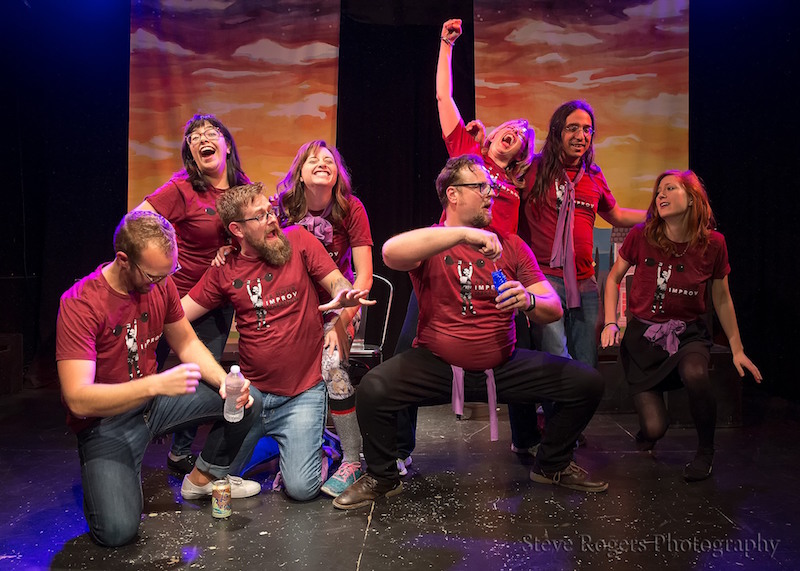