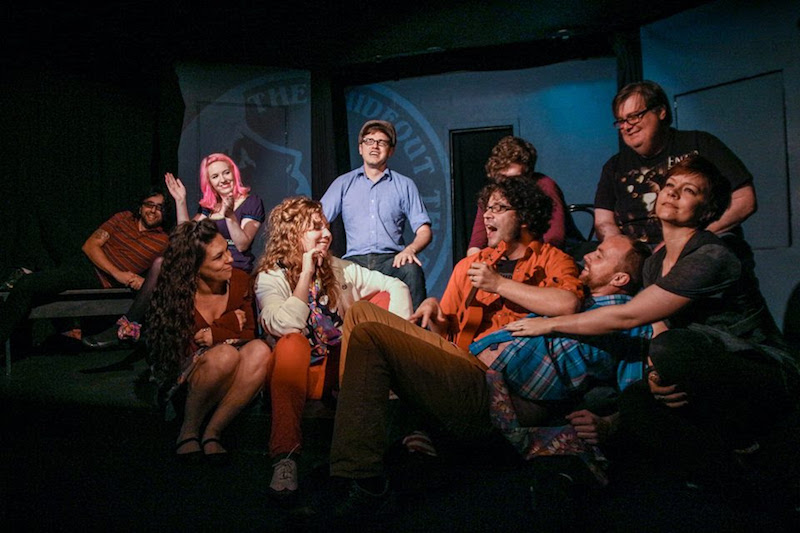 When it comes to doing something for 48 hours nonstop, the only thing most people can lay claim to is breathing. But eight of Austin's most intrepid improvisers will spend 48 consecutive hours this weekend making stuff up onstage. From 5pm Friday to 5pm Sunday, June 23-25, they'll be at the Hideout Theatre performing in 48 different improv shows.

The members of this improv octet – Ryan Austin, Katie Dahm, Yamina Khouane, Craig Kotfas, Margaret Rose, Patti Stiles, Rob Yoho, and J.R. Zambrano – will be following in the footsteps of participants in eight previous improv marathons at the Hideout, which has been growing in length since the first event in 2009. That marathon ran 40 hours, and each successive marathon has upped the endurance ante by tacking another 60 minutes onto the previous total. Thus, here we are with the ninth edition, running a full two days.

Outside of the time extensions, the event is very much the same as it has been all these years: Eight core improvisers go the distance, performing in a different format and/or with different guest artists. As you'd expect, many of those come from the Hideout: troupes that make the theatre their home base, such as Paralellogramophonograph (Fri., 10pm) and the Amazon and the Milksop (Sun., 1am), and popular mainstage formats such as Start Trekkin' (Fri., 7pm), Charles Dickens Unleashed! (Sat., 3pm), the recent salute to Eighties-era good-cop/bad-cop flicks Buddy Cop: Metro City Nights (Sat., 6pm), and the current salute to Eighties-era coming-of-age sci-fi adventures How I Saved the World Over Summer Vacation (Sat., 8pm & 9pm). But as this is considered a community-wide event, you'll also see improvisers and formats from all over town, including the New Movement's Fuck This Week (Fri., 11pm), Institution Theater's Immigrants! The Musical (Sat., 12am), the all-female musical improv troupe Girls Girls Girls (Sat., 5pm), and ColdTowne house troupe the Frank Mills (Sat., 7pm).

You can purchase tickets to the individual shows, hour by hour, at $5 a pop, or secure an all-marathon pass for the low, low price of $48. As usual, proceeds benefit the Hideout Kids Improv Scholarship Program.