Authors and activists address the state of Black culture

The Austin African American Book Festival celebrates its 11th year and, like years past, addresses the current state of Black culture and race in America. “The festival celebrates the humanity, intellect, diversity, and depth and breadth of the Black experience," said Dr. Peniel Joseph, UT professor and author at the festival. An event that is more important now than ever as it gives a voice to combat systematic racism.

According to Joseph, race lies at the center of American democracy: influencing public schools, national politics, the criminal justice system, and much more. His outlook on America has grown more complex as the Obama presidency and the Ferguson shootings altered the rhetoric of the 2016 election and racial, religious, and LGBTQ discrimination.

Historical Black activists and writers that influenced contemporary literature play a role in Joseph’s keynote address (Saturday, 1:30pm) titled Black History, Literature, and Power in the Age of Black Lives Matter. His 2014 book, Stokely: A Life, gives a portrait on Stokely Carmichael (later Kwame Ture), a leader in the civil rights and Black Power movements. Stokely argued that blacks needed to identify and eliminate oppressive structure for themselves. Joseph argues that institutionalizing Black humanity is one of the most powerful ways society can overcome the racism inherent in a nation founded on slavery. Joseph continues, “That stands at the heart of black literary traditions.”


More Writers to Check Out at the Fest:

Watkins’ The Cook Up: A Crack Rock Memoir, tells the story of a teen who gets accepted to Georgetown University, but whose life changes after his brother dies and he decides to take over the family drug business.

Sinclair’s coming-of-age novel, Coffee Will Make You Black, follows a young African-American woman growing up in 1960s Chicago. While emerging into adulthood, she discovers her sexuality and identity as a Black woman. 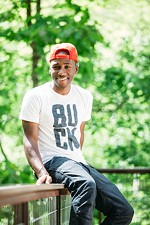