Five Things to Do in Austin This Weekend

Oh, wait, is this a new list of entertainment options?

Why, yes, observant citizen – this “Five Things” post is part of an ongoing weekly series! And here are a few recommendations of events likely to delight even one as clever as your own Austin-living self this first weekend in June. 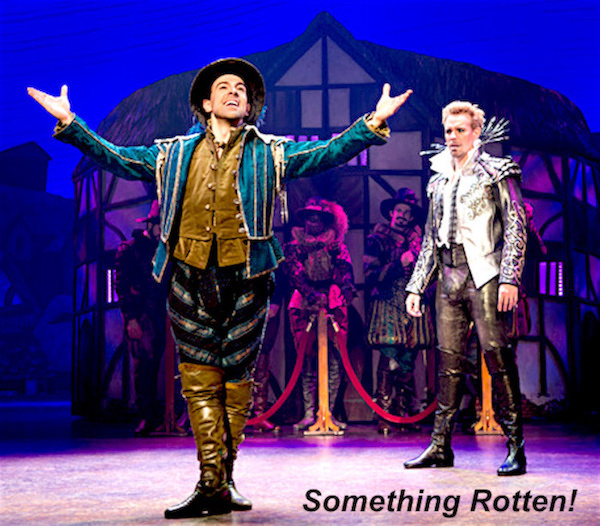 1) SOMETHING ROTTEN! Now here’s a modern musical comedy that sends up … the origins of modern musical comedies? Indeed, sirrah – and touring from Broadway, no less. The show’s done up as if the Bass Concert Hall stage was part of Shakespeare’s time – but with all sorts of clever pop-culture tomfoolery and Bard-skewering badinage set to finger-poppin’ music and dance numbers. Prithee, get thee to this funnery!

2) THE BANTER SHOW Wanna see how funny all those well-polished stand-up comics can be even when the material’s completely unpolished? Even when they come up cold, and have to crack wise about surprise topics onstage among their funniest peers? Reckon you’ll see they’re not called professionals for nothing. And, as if it’s a bonus, this late night Friday Velveeta Room show boasts an impressive sampling of the top comedy talents in town – for instance, your hosts Mac & Ximena Blake.

3) ANDREW HILBERT Horror writer? Yes. Barista? Yes. Sick little bearded monkey who knows how to entertain a crowd like he’s some eldritch but adorable combination of H.P. Lovecraft and Louis CK? That’s three for three, weird-fiction lovers – and this local Hilbert’s got a terrific new book about fucked-up-beyond-belief Austin, Invasion of the Weirdos, that he’ll be releasing at BookPeople on Saturday.

4) ART.SCIENCE.GALLERY.: FAR OUT You know that you can’t see the actual James Webb Space Telescope here, right? That magnificent apparatus is up in Maryland, at the Goddard Space Flight Center. But, check this out: You can see what that Center’s sent out on tour – a small-scale version of the Center's accompanying exhibition now on view at this Canopy-based gallery, starting with this Saturday’s reception. And, because curator Hayley Gillespie’s not just gonna display that all by its already-fascinating lonesome, it’s partnered with a new show of original artwork and prints inspired by such telescopy.

5) THE BLANTON’S SOUNDSPACE: REFUGEES It’s not that we’re sympathetic to the struggles of refugees – though we are sympathetic to those struggles, simply because we’re not xenophobic cretins with shards of ice where our hearts should be – it’s that Middle Eastern music has always kicked our ears’ ass in a highly pleasurable fashion. And when a concert of those compelling sounds is curated by the ever-adventurous Steve Parker? And it unveils itself at the gorgeously blue-tiled Blanton Museum of Art on a Sunday? You know we’re gonna be there, front and center, insh’allah.