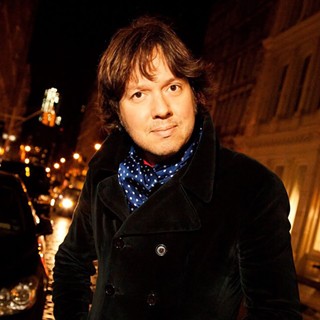 Dave Hill – not to be confused with Lance, "The King of Black Metal" (Photo by Mindy Tucker)

Witch Taint. Mystikum. Have you ever heard such dark, brutal names of any black metal band in your life?

The answer is hopefully “yes,” because Dave Hill – the comedian and writer whose Witch Taint: The Black Metal Dialogues Live! packed the Hideout Theatre with SXSW attendees on Sunday – depends on his audience knowing the name of at least one semi-mainstream metal group to push his warped two-man show through successfully. Like a twisted Burzum concert staged in the manner of A.R. Gurney’s Love Letters, The Black Metal Dialogues finds Hill playing Lance, a fictitious 19-year-old Gary, Indiana, resident who calls himself “The King of Black Metal” while corresponding aggressively with a real Norwegian musician, Saittham.

Played by the invaluable Phil Costello, Saittham (that’s Matthias spelled backwards, but “usually he lets people figure it out themselves”) was a member of an actual band, Mysticum (with a “c,” not a “k” – Mystikum is made up) that was signed to a “very selective” Asker-based record label. As Hill explains, around 2003 he began sending obtuse, hostile emails to record companies as the frontman of Witch Taint, a vicious (and fake) black metal band whose imaginary music was so “dark,” so “kult,” and so “brutal” that the walls of an unprepared musical venue might collapse at any second when it was played.

Somewhat unexpectedly, the Norwegian responded in 2004, opening up a months-long exchange that was equally composed of sexualized taunting, absurd colloquial miscommunications, and empty criticism of “untrue” metal groups like Mayhem. “Lance” claimed that his songs made people want to self-immolate, but refused to send over supposedly “dangerous” demos. Saittham responded in alternatingly angry and affable tones, demanding to hear a record that did not exist. These quite sensational emails were smartly saved for posterity, and now Hill and Costello perform them as a script as, respectively, the “blackest of the black” Indianan teen and a subtly disillusioned Norwegian rocker.

Sunday's performance of The Black Metal Dialogues went over like gangbusters, with both comics wringing equal laughs out of their ironic bemusement. Hill opened and concluded with slipshod video montages of occult imagery, some of which, like satanic ewes falling over, was as hilarious as the spoken jokes. Catching them on the projection behind the stage, the writer/performer continuously cracked up in the midst of his lines, his traditional white facepaint with black mascara making him appear like Paul Stanley at a circus. Costello, on the other hand, maintained his character with aplomb, spewing Saittham’s bafflingly patient emails with a near-offensive Scandinavian accent under a thick wig.

Though I imagine their roles have become expertly mechanical for Hill and Costello, the raucous environment at the Hideout ultimately created a sense of intimacy and great exclusivity: It was as if the show was being tested and explored with the audience, rather than rudimentarily performed for them. A more perfect atmosphere is hard to imagine for a show this peculiar, and Hill and Costello brought the house down, just as "Lance" threatened. All it took was a two-song set list of perhaps the darkest, most “kult,” blacker-than-black – times 50, as Lance would say – metal song parodies ever composed.