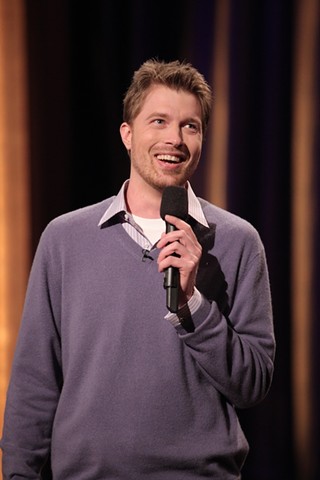 Shane Mauss is not afraid to explore the farthest reaches of his mind. The L.A.-based comic, who once broke both his feet while hiking and turned the experience into a hysterical album, is now winding through a six-months-and-counting tour all about psychedelic drugs. But this isn't a “far out, man” Cheech & Chong routine. Mauss gets real.

“When I started as a stand-up, I was a joke machine-type comic,” he says, “grind it out and work really hard to hone wording on a given joke. But now my writing is far less forced and I try to present whatever I’m naturally interested in.” Lately, that interest has been the mind-opening power of psychedelic drugs and the strange history they have with legality, experimentation, and science. “It was more about the jokes when I started, but as I got comfortable sharing experiences, I felt comfortable adding more information and complex concepts. It was terrifying, but the feedback I got was overwhelming, people really like the big ideas more than the easier jokes.”

In addition to his stand-up, Mauss has been running a podcast for more than two years called Here We Are, in which Mauss interviews scientists, academics, and other experts about some of the biggest questions people have in life: Why are we alive? What is happiness? What is reality?

“I was just genuinely curious,” he says of the podcast’s origins. “I started it as a way to trick smart people into teaching me how life works. Somehow it’s slowly grown to about 50,000 listeners a week. The amount of information to gain about the world is infinite and overwhelming. The buzzword in academia now is interdisciplinary, and the more you can know about a variety of stuff, the better, but there are people who only study zebra mussels, too. And they’re just as fascinating.”

Mauss is currently lining up some overseas legs for this tour, but his next big stop after SXSW is the Psychedelic Science Conference in San Francisco. “It’s a conference that happens every four years, the Olympics of psychedelics,” he says. “The who’s who will be there. When I ask around, which researchers will be there, all the people say everybody.”

In an age when NPR explainer podcasts become blockbusters, Mauss has clearly found a popular niche in his natural fascination with the human mind. However, attendees should be forewarned: The show is still going to kill you with laughter. Mauss stopped at Cap City Comedy Club last February, when this two-and-a-half-hour show was still new, and I got the chance to see an earlier version of it. As deep and fascinating as it gets, this is a gut-busting piece of stand-up comedy, full of keen observations about the absurdity of people. Mauss still retains the accent of his native Wisconsin, and his slow but steady delivery makes even the most outlandish concepts seem quaint and relatable.

In fact, Mauss was once a member of Austin’s own comedy scene, living here in 2011 and 2012 before decamping to L.A. “I moved a little earlier than expected due to a series of circumstances, but I wanted to be here longer,” he says. “I’m half-considering moving back to Texas for a couple of years.”

For now, he’s mostly on the road, peddling jokes and seeking knowledge like a cross between a wandering troubadour and a wandering guru. You won’t be sorry if you hitch a ride on this trip.

A Good Trip with Shane Mauss will be performed Tue., March 14, 9pm, at the Hideout Theatre, 617 Congress.