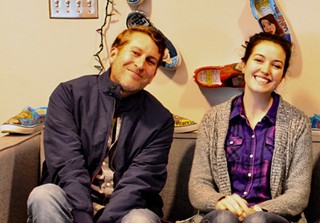 For a “record-breaking 11th year in a row,” garrulous comedian Scott Aukerman returned to SXSW, this year to tape two live episodes of his beloved Comedy Bang! Bang! podcast. With his usual whip-smart timing and managerial expertise on full display, Aukerman guided the first taping at Esther’s Follies to frenzied, deserved applause.

Though CBB, a reimagined version of Aukerman’s Comedy Death-Ray, is more than 500 episodes deep into an eight-year run, this stalwart comedy program shows no signs of slowing. At Saturday’s event, the host assembled his usual mix of comic celebrities and improvisers to alchemically hilarious effect. First on the stage was MTV’s Jon Gabrus as “Gino Lambardo,” the perilously slight Long Island-born intern who has obviously and inarguably become the show’s co-host, despite the host's frequent claims to the contrary. Gabrus has a faculty for making Aukerman laugh, and their intellectual one-upmanship brought the fan-heavy crowd to early hysteria.

In the thrall of this strong reception, Bob Odenkirk and comedian Sean Hoffman (an ongoing riff on the name of guest John Hodgman) took the stage as themselves. Odenkirk, in town to promote his "KFC show I Cal Sal" (actually AMC’s Better Call Saul), started things off quietly, letting Hodgman and Gabrus push one another to make jokes about shit – or more specifically, about shitting into bidets. After a few minutes, Aukerman pushed his guests into an inspired bit about genocide, with Gabrus imitating Pol Pot and Odenkirk riffing on his television credentials as the lawyer who defends him. By the time Pol Pot was compared affectionately to Santa Claus, the show reached a crescendo that did not let up through the final guests.

In this past year of the podcast, Jessica McKenna of L.A.’s Upright Citizens Brigade has quickly risen to acclaim as a freestyle rapper and quick wit; but her work last night as Slovenian acrobat Dagmar the Small escalated her to new heights as a voice caricaturist. McKenna began by spewing whooshing sound effects in imitation of Cirque du Soleil-style gymnasts into the mic like some kind of improvisational Ben Burtt, immediately pushing Hodgman, Gabrus, and Odenkirk into newly absurd waters. If the crowd’s raucous reaction was any gauge, hers became the star character, responding “Thank you!” to basic questions about where she was from and what she did for work (her obnoxious gratitude became the night’s key recurring joke).

McKenna commanded the stage until the entrance of Seth Morris (best known to podcast devotees as the perennially ill Bob Ducca) as a semi-official city employee tasked with “keeping Austin weird.” With a caterpillar mustache and long limbs, it takes little for Morris to play a hipster creep that requires all homemade kombucha “to have that little loogie thing at the top.” But when Morris got a classic improv scene going which found him measuring several Austinite couples’ weirdness quotients, Esther’s became cacophonous with familiar, lightly drunken hooting.

By the end of this nearly hour-and-a-half comedy extravaganza, Aukerman could again boast of having balanced the crowd’s reverie for famous comedians with their fancy for unexpected happenings. But the show’s greatest accomplishment was its pacing: Few entertainers can claim to have sustained such a high pitch of pleasure without a noticeable moment of slackness. If nothing else, the night reiterated why millions of listeners heap frantic adoration on the show every month.