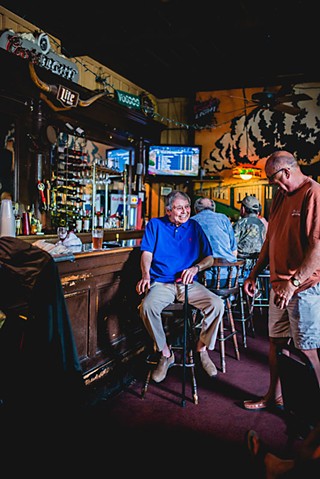 Texas has lost a Mad Dog.

Gary Cartwright, Texas Monthly stalwart, author of the true-crime classic Blood Will Tell, sportswriter extraordinaire, inveterate prankster, and all-around helluva writer, died Wed., Feb. 22, after complications from a fall in his home. He was 82.

Cartwright belonged to an extraordinary generation of Lone Star writers who were all somehow corralled together in the Seventies for this new rag that Mike Levy had cooked up called Texas Monthly: William Broyles Jr., Gregory Curtis, Stephen Harrigan, Jan Reid, Paul Burka, Prudence Mackintosh, and Al Reinert, to name a few. Over the four decades that Cartwright was affiliated with the magazine – 25 as a senior editor – he produced stories so rich in character and powerful as journalism that they set the standard for great writing in its pages: profiles of Candy Barr, Jay J. Armes, Jerry Jones, Jack Ruby, Benny Benion, and, of course, Willie; deep digs into the frame-up of Randall Dale Adams, the alleged child sex abuse case against Fran and Dan Keller, the drug running brothers Lee and Joe Chagra, and pit bulls trained to fight and kill for sport; and, natch, the story about big-bucks Cowtown oilman Cullen Davis and the shooting of his wife Priscilla Davis that formed the basis of Blood Will Tell.

Now, by the point he was drafted for TM's all-star team, Cartwright had already made a name for himself with his work on the national magazine scene (Harper's, when Texas ex Willie Morris was editor; Sports Illustrated; Esquire; Rolling Stone; Saturday Review; and Life), his 1969 novel The Hundred-Yard War; and prior to those, covering sports for the Dallas Morning News, Dallas Times Herald, and Fort Worth Press (where he, Bud Shrake, and Dan Jenkins formed the infield power trio for legendary editor Blackie Sherrod).

But Cartwright will be remembered for more than what he committed to the page. As Chronicle contributor Joe O'Connell noted in his 2015 feature about this "iconic Texas scribe," "Cartwright's life swirls in the interesting." His Big D sportswriting days brought him in the orbit of Jack Ruby's Carousel Club and not a few of his ecdysiast employees. His initial stabs at screenwriting with Shrake led to a visit to the set of Kid Blue in Durango, Mexico, where a wild Dennis Hopper, fresh off his Easy Rider triumph, pointed a loaded pistol in his face. And he and Shrake were known to cavort about in tights and capes while passing themselves off as the European acrobats the Flying Punzars. That dynamic duo was also responsible for the founding of Mad Dog Inc., either an extended prank styled as a corporation or a corporate-styled outlet for their prankster impulses (motto: "Doing Indefinable Services to Mankind").

To get the full flavor of these experiences, you need to hear them from the source. Fortunately, Cartwright included many such tales in his last book, The Best I Recall: A Memoir (University of Texas Press, 272 pp., $27.95) and the autobiographical Heartwise Guy (1998), written in the wake of his heart attack and bypass surgery, and the early must-read magazine feature, "Confessions of a Washed-Up Sportswriter." Reading those will likely whet your appetite for the man's other work, in which case you should obtain Blood Will Tell (1979); Dirty Dealing: A True Story of Smuggling, Murder, and the FBI's Biggest Investigation (1984), and Galveston: A History of the Island (1991). You might even be tempted to check out his screenwriting efforts with Shrake: the ex-con rodeo rider drama J.W. Coop (1971), starring Dale Robertson; the considerably more lighthearted TV movie with Willie Nelson and Kris Kristofferson, A Pair of Aces (1990) (on the 1991 sequel, Another Pair of Aces, he was co-producer); and Pancho, Billy and Esmerelda (1994).

In 2012, Cartwright was recognized with the Texas Institute of Letters' Lon Tinkle Award for career achievement. Other professional honors include the Texas Institute of Letters' Stanley Walker Award for Journalism and the Carr P. Collins Award for nonfiction, the 1989 Press Club of Dallas Katie Award for Best Magazine News Story, the 2005 Headliner Club of Austin award for best magazine story, and a Dobie-Paisano fellowship.

Cartwright is survived by a daughter, Lea Hickman, of Santa Rosa, Fla.; a son, Shea Cartwright, of Houston; five grandchildren; and six great-grandchildren. Another son, Mark Cartwright, is deceased. In lieu of flowers, donations may be made to the Wittliff Collections at Texas State University, where his papers and mementos reside. For more information, contact Director of Development Ramona Kelly at ramonakelly@txstate.edu.

A graveside memorial will be held Saturday, March 4, 11am, at the Texas State Cemetery, 909 Navasota. A wake will follow at Scholz Garten.