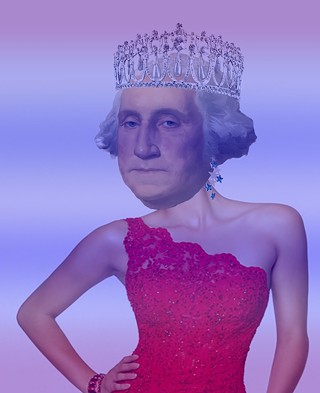 As a certain wrinkled Dreamsicle prepares to become the nation's Complainer-in-Chief, Austin's creatives are making their feelings known through a variety of events and actions – some symbolic, some critical, some providing financial support to agencies whose future may be endangered during his administration. Here are several of note:

The Ghostlight Project Austin
Thu., Jan. 19, 5:30pm, ColdTowne Theater, 4803 Airport;
7pm, the Yard at the Vortex, 2307 Manor
The Ghostlight Project is a national theatrical action with more than 600 stage companies, schools, clubs, and businesses across the U.S. currently signed on. At each participating location, members of the community will gather around a theatre’s ghostlight – the light left on in a darkened theatre to ensure safety – as both a show of solidarity in resisting intolerance and a pledge of commitment to work for social justice, make art for all people, and create brave spaces in our communities and throughout the nation – in essence, serving as lights in the coming years.

The Demolitionists
Fri., Jan. 20, 10:45am, Texas State Capitol Grounds
An anonymous masked guerrilla troupe will stage a Trump inauguration protest on the Capitol grounds starting at 10:45am on Friday. During the event, a tweeting baby-man Trump will be surrounded by masked cabinet goons in dark coats and red armbands, and a host of innocent “citizens” will meet an untimely fate. Onlookers are encouraged to join in (participation will become clear once you watch for a little while).

Staged Reading of The Taming
Fri., Jan. 20, 4pm, The New Movement, 616 Lavaca
Playwright Lauren Gunderson (Silent Sky, Exit Pursued by Bear) has made her play The Taming available for free to any theatre artists wishing to read it as a protest to the inauguration, and thespians in more than 40 cities have taken her up on the offer. In Austin, it’s A Team of Nasty Women — consisting of director Molly Karrasch and actors Crystal Bird Caviel, Jess Hughes, and Jenny Lavery – who will present this raucous satire about a beauty queen at the Miss America pageant who traps a liberal activist and a Republican senate advisor in a hotel room with her to rewrite the U.S. Constitution,
$10 suggested donation; proceeds benefit Planned Parenthood of Central Texas and Southern Poverty Law Center

ATX the Election Monologues
Fri., Jan. 20, 7pm, Orange Coworking, 2110 W. Slaughter #160
Austin is one of 14 cities across the nation taking part in this event of resistance and unity, wherein people of all ages, colors, and political dispositions share personal stories about the 2016 election. In each community, six to 10 people will share monologues about how the election has affected them. In Austin, Maggie Duval will deliver a monologue and play host to Carina Boston Pinales, Jo Rae Di Menno, Ruth Glendinning, Randy Langford, and Hunter Tripp. The program will be followed by a short writing and sharing session.
$10 suggested donation; proceeds benefit Texas Civil Rights Project

What a Joke Austin
Fri,. Jan. 20, 10:30pm, The New Movement, 616 Lavaca
Austin is one of 33 cities across the U.S. (plus one city in England) supporting What a Joke, an inaugural weekend comedy event in response to President-Elect Donald Trump’s repeated threats to human rights. The local program features host Robert Segovia and comedians Carina Magyar, Arielle Norman, Devon Walker, Kat Combs, Ralphie Hardesty, and Eric Nimmer.
$10 at the door; proceeds benefit the American Civil Liberties Union 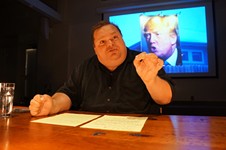