Three new releases from those geeky savants at Fantagraphics

Looking for a gift for some comics-loving friend this holiday season, citizen? Or want to get yourself a little something decent in the way of sequential art in a good-looking package? Because you deserve it, really, just for having survived almost another whole year on this planet without resorting to homicide or suicide or some other sad 'cide? 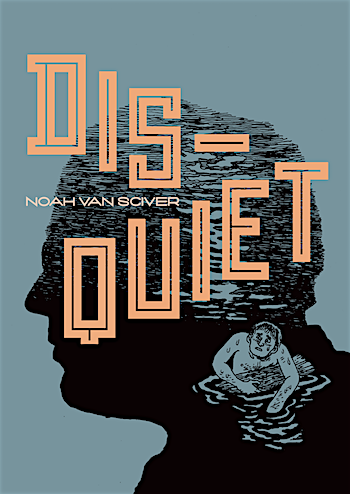 And because he’s so good at what he does, that’s why Van Sciver’s won an Ignatz and other honors. And this Disquiet collection from Fantagraphics is a solid compilation of evidence to support all those assertions.

In slice-of-life narratives “The Lizard Laughed” and “Night Shift” and the untitled story that starts on page 101, the artist has captured – with detail-rich cartooning realism – familiar portions of life in contemporary times. Which doesn’t stop him from also rendering a serious old-fashioned fable like “Cow’s Head” or a much sillier modern goof like “Punks V. Lizards,” or even a straight-up and violence-riddled tale from actual history – as in “The Death of Elijah Lovejoy.”

All of which serve to make this handsome hardcover package and its contents – some of it black-and-white, much of it rich with color – a worthwhile experience.

But, wait! – as they say in the infomercials, before they trot out the ol’ bamboo steamer or whatever – this is comics, right? And it’s not just that comics are a whole different medium from movies or prose or theatre, a whole different scheme with its own tropes and signs and vernacular and so on, a scheme that Van Sciver handles well. It’s also that this is sometimes a purely visual art that we’re considering, simultaneous with comprehending the narratives; and hurray for that, because we love visual art. And so it’s a bonus that Disquiet also boasts several pages of gorgeously enhanced silhouettes by the artist, and that a few of the large, scene-setting panels of the comics would succeed as landscapes framed on a lucky wall somewhere. But luckier yet, we’re thinking, would be the bookshelf that holds this collection. Don’t mind us, we tend to go a little nuts over anything created by that Dash Shaw. And you know, from this article about Clay Liford’s excellent movie Slash, that we also have a certain fascination for the whole fanfic/cosplay subcultural scene. So when we get a copy of Shaw’s new Cosplayers, a collection of interconnected stories about two young women who are into cosplay to the point of making YouTube videos of their DIY superhero adventures, and about the various people they come into contact with at conventions and in comic book stores, you can figure we’re going to be smiling like fiends as we turn the pages of this Fantagraphics hardcover and get a mindful of what the artist’s rendered in his usual enjoyable style. Yeah? You, too, huh? And you’re further – intrigued? stoked? chuffed? – to know there’s also an homage to Jack Kirby’s 1976 version of 2001: A Space Odyssey for Marvel in there? “The energy emanating from the comics was too powerful. It could not be contained.” And, elsewhere in the volume, there’s a self-effacing comics-creator thinking, “Tezuka’s up there, judging me … Be merciful, Lord God of Manga, please …” and you can relate? Then put your money on the counter at your favorite comic shop, citizen. Swipe that credit card and get you one of these for Christmas – or at least before your next con attendance. 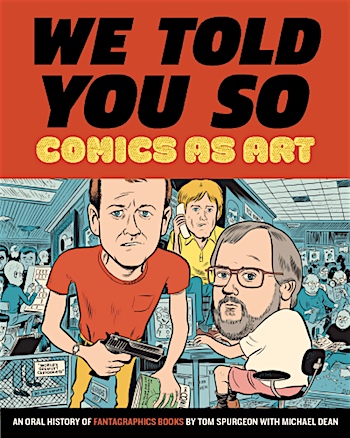 We Told You So: Comics As Art by Tom Spurgeon and Michael Dean

Mark Fagan, one of my co-workers here at The Austin Chronicle – he deals with the event listings that I don’t deal with, and he’s also one of those indie musician-types, gonna be going on some tour through Europe with The John-Pauls next fall – he’s a big Daniel Clowes fan.

Fagan’s the guy I can usually yak about the alt-comics scene with while we’re scrounging in the Chron kitchen for whatever crumbs might be left over from Wednesday’s big press-day lunch.

But right now I’m looking at this new hardcover book from Fantagraphics, this vivid, comics-riddled oral history of the company, and what I’m thinking about Fagan is how he recently did one of those Mortified! performances – you know, the show that happens all over the country and which Michael Graupmann hosts the periodic Austin incarnation of? Where people go onstage and share some embarrassing bit of juvenilia from their goofier years? Like, old diary entries or fan letters to celebrities or maybe some frightening verse to a buck-toothed girl in Luxembourg?

Because the first section of this We Told You So: Comics As Art compilation of interviews and documents painstakingly and (I’m assuming, but yeah) lovingly wrangled by Tom Spurgeon and Michael Dean, it’s like Fantagraphics’ co-founder Gary Groth is onstage somewhere doing an exhaustive and visually enhanced Mortified! sort of thing. Which is what happens, eventually, after you’ve been pubbing your ish for 40 years and so your documentarians can harken all the way back to your early teenage years as a comics fanboy.

But: That’s just a bit of the first section, in the beginning, the Mortified! sort of stuff. Because 40 years is a long goddam time and this book covers all those years, in rich & tasty detail, which is why the sturdily bound thing’s heavy enough to clobber Galactus with. Like, never mind that ultimate nullifier, Reed, hit the ol’ Devourer of Worlds with this glossy chunk of paper technology, you know what I mean?

And I can’t read the thing – I can’t snack among the myriad treasures of this We Told You So – without recalling last year’s similar history from Drawn & Quarterly. Which was a huge undertaking from that Canadian powerhouse (and I reckon that if I refer to the Montreal-based publisher as a “Canadian powerhouse” just one more time, I’m gonna haul off and punch myself in the face) – and those guys had to cover “only” 25 years of creative industry. So, although I was impressed with the volume of material in that D&Q history, I’m even more impressed by the breadth (and attendant depths) of Fantagraphics as covered by Spurgeon and Dean in We Told You So.

Jesus, people, as the kids are wont to say: Jesus Fucking Christ, what an accomplishment.

And you, dear reader, can this review really sway you either way? I mean, you already want to read and/or own this big book or you don’t, right? Because you’re a comics fan? Because you’re (especially) a Fantagraphics fan? Right. So the best I can do – having perused the many many many pages and done a few deep dives, textwise, in a few of the chapters – the best I can do is tell you: What you want from a history like this? The good, the bad, the ugly; the long strange contentious trip; the triumphs and tribulations and camaraderie and lawsuits and acclaim and relentless industry of it all; the way it really was, let’s believe, as recounted by a multitude of passionately involved voices over the decades? You’ve got it, highly illustrated and neatly organized, in the epic We Told You So.

And that ol’ Mark Fagan, who also can’t stop talking about how good Patience is? He totally concurs.