Austin, are you ready to Rock?

I know, I know, it's a pun unworthy of a comedy genius on the order of Chris Rock, but it does help cut to the chase, which is letting you know that Rock is bringing his Total Blackout Tour to Bass Concert Hall on May 14.

Yeah, that's gonna be one mother of a Mother's Day.

Texas Performing Arts announced the booking Tuesday morning, Dec. 6, along with the information that tickets will go on sale Fri., Dec. 9, at 10am. Rock only announced the tour – his first in nine years that will boast all-new material – on Monday in a Facebook Live video at the Los Angeles Comedy Store. The tour kicks off on Valentine's Day in Durham, N.C., and covers 25 more cities through June 3. Material from the tour will be filmed for one of two Netflix specials that the comic signed to do this fall.

As exciting as the news is for Rock's fans, it's another hit to the wallet for fans of stand-up in general who have already seen a bounty of high-profile bookings crop up for early 2017. In just the last two weeks, dates have also been announced for Sarah Silverman (Bass, Jan. 22) and Billy Crystal (Long Center, Feb. 28). And those are on top of the bookings of several high-profile comedy figures announced months ago such as Jerry Seinfeld (Bass, Jan. 13). The first two months of the year are now almost to the point of having a major comic in town once every week. (Of course, we may be in need of extra laughs considering what's in store in the new year.) 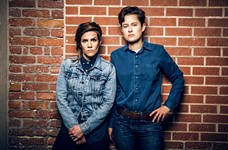