Following the deadly stalkers through the stacks of Mulholland 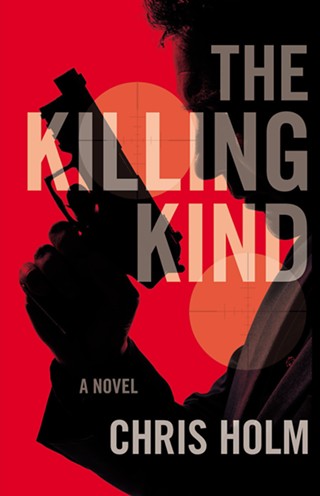 The characters, that is: The ones populating any number of modern crime thrillers and violence-riddled mysteries that feature detectives (private or otherwise) and hitmen (or hitwomen, for that matter) and other criminals and their victims and are successfully purveyed by publishers like, oh, Akashic, say. And Melville House. And Little, Brown's Mulholland Books. And – actually, listen, Mulholland is the imprint we’re going to take a brief look at right now.

“You’ve got time to read,” it says above – with the “if” only implied.

But the winter holidays have begun and, even if you’re the kind of sports nerd who can’t tear your attention from a bunch of musclebound fucks chasing after a ball on some screen somewhere, there are a few stretches of non-work doldrums coming up. A few stretches in which you might not be called upon to socialize with distant family members or connect with new in-laws or hang out with Great-Uncle Bob while he gets slowly drunk and recounts, at dire length, the details of last year’s gall-bladder surgery.

(“Yeah, they went laparoscopic with it,” he’ll say, sipping his Bushmills. “You know what that is, ‘laparoscopic’?”)

And those will be holiday stretches where you can indulge in a bit of reading, friend. And you’ll be damned if that reading’s going to involve a flotilla of hoary classics or anything too overly taxing of your intellect (which, to be sure, enjoys wrestling with a nice thick Pynchon every now and then – but, FFS, not after so many helpings of turkey and potatoes and pie).

So let me tell you about a few of the crime/thriller things that Mulholland Books has going on right now?

First, I’m going mention a title and an author – I.Q. by Joe Ide – but then I’ll just leave the mention sitting there and get back to it at the end of this post.

Instead, right now, check out this guy called Chris Holm and his The Killing Kind.

There’s a paragraph in The Killing Kind, where the author is describing what his protagonist Mike Hendricks, the hitman, is fixing himself for breakfast. And it’s a succinct little description, to be sure – no suddenly Proustian ramble turning the narrative into a swamp of recollection or maximalist detail – but it’s evocative enough, vivid enough, that eventually I’m going to excerpt the thing for this collection of fictional-descriptions-of-food-prep-and-eating that I’ve been compiling.

And everything else in The Killing Kind is similarly evocative, similarly vivid, but much more focused on how Hendricks, a former elite soldier who most of the world thinks died in an attack overseas, is a hitman who kills only other hitmen, and exactly what that means, and what sort of murderous shenanigans ensue when another (much more ruthless and equally relentless) hired killer targets him. Yeah, there’s some high stakes shit going on in this thing – and author Holm delivers it in a package that’s enjoyable to consume.

And then he follows it up with a sequel called Red Right Hand. Which rocks, as the kids used to say, just as hard. Terrible violence. Battles of bullets and brawn and brains. Humans versus humans, fatally. Death, senseless and otherwise. You know: All those things we like to experience vicariously.

Holm’s previous novels, we’re told in the About The Author note, are thrillers unfolding in a more fantastic and otherworldly setting. So the man’s got more than one genre-hungry jones covered, seems like. Thumbs up, we say. Thumbs up, then lick those thumbs and use them to turn the pages – quickly now, to find out what happens next.

And now we come back to I.Q. by Joe Ide.

This is Ide’s debut novel. But he’s not a relatively young guy like that Holm; he’s a middle-aged guy, and he’s not a celebrity this or that, and this is only his first published novel.

So here’s a mystery: Why does the man’s name, so jarringly color-drenched, take up an entire half of the book’s cover?

Because, I figure, Mulholland Books knows what’s up. Because, I deduce, this debut novel is going to splash the name Joe Ide across the crowded map of crime fiction and of commercial fiction in general. Because it’s that good, it’s that unusual. And so Mulholland is making sure that that name – soon to be sought out by anyone wanting to know what sort of freaky antics, complex struggles, and lethal brutality go down 1) in gangsta-land Los Angeles, and 2) among a major rap star and the more perfidious members of his entourage, and how a young African-American autodidact and streetwise sleuth named Isaiah Quintabe is involved in it all of it – Mulholland is making sure that the name Joe Ide is real fucking easy to find. You know?

I happily suggest that you find that name on the book – and also buy the book. And do your stretch of holiday time a favor by reading this hilarious and harrowing, starkly modern, strikingly American, inner-city sort of oblique homage to the adventures of Sherlock Holmes and Dr. Watson. It’s an homage that Arthur Conan Doyle himself would likely disavow in flustered indignation, would possibly feel downright scandalized by. But, as sure as Red Vines ain’t really licorice, it’s one hell of a thrilling read.

Who Will Help the Hospitality Industry? And Who Else Has Closed?
Here's what's happening in the Austin culinary scene right now