10 classic solutions to which crimes are worth reading about 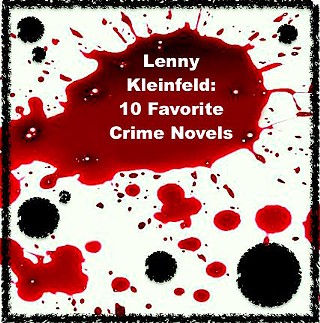 Kleinfeld? That’s Lenny Kleinfeld, of course: The man who left Chicago for a business trip to L.A. and, more than 30 years later, still hasn’t returned. The man who introduced the world to the stalwart detectives Bergman and Dunegan and all the homicide-riddled shit they have to deal with in that Windy City of theirs.

That guy, with the I-know-where-Hoffa-is-buried twinkle in his eye.

Lenny Kleinfeld’s one of our favorite modern crime-fiction authors – and relatively unsung, although not without a certain acclaim beyond us repeating this hosanna as often as possible. He’s also a man we turn to for recommendations in the genre, because he’s got excellent taste; and, because we’re not so stingy after all, we’re sharing those recommendations with you, dear criminally curious reader:

Hamlet by William Shakespeare
OK, not a novel, but it is the foundational document for bleak introspective Scandinavian murder fiction.

The Glass Key by Dashiell Hammett
The most brutal and political of the Founding Father’s novels.

The Killer Inside Me by Jim Thompson
Ultra-twisted first-person narrative by a sadomasochistic homicidal sheriff. Side-effects of reading this book may include frequent drinking and showering.

Gorky Park by Martin Cruz Smith
The ever-resonant tale of how difficult it is for an honest cop to investigate murders under a vicious, corrupt, kleptocratic, and pathologically mendacious regime.

Get Shorty by Elmore Leonard
Murder and idiocy in Hollywood. His most accurate, funny, and bitchy travelogue-noir.

The Likeness by Tana French
Implausible “lookalike” undercover-cop premise that you happily accept and wallow in because the writing is so vivid.

The Mystic Arts of Erasing All Signs of Death by Charlie Huston
The ultimate black comedy bottoming-out crime novel; a real smart, really fucked-up guy gets a job cleaning up grisly crime scenes.

His Bloody Project: Documents Relating to the Case of Roderick Macrae by Graeme Macrae Burnet
A multiple-POV tale of a horrific murder in rural Scotland in 1847, not told as a thriller but as a deep dive into character. It was a finalist for the 2016 Man Booker Prize, but don’t let that dissuade you.

The Monster of Florence by Douglas Preston and Mario Spezi
Better written and more gripping than most crime fiction, this story of a serial killer investigation intentionally mishandled by deeply politicized Italian police, prosecutors, and judges is a scary read.