When Linalice Carey began making theatre in Austin, the spaces were small and far from glamorous. But that never stopped this intrepid producer/director/actor/writer/puppeteer/ entrepreneur from creating stage magic in them. Now, this landmark figure in the city's theatre scene from the Sixties to the Eighties has died. She was 95.

Carey was a leader in the independent theatre scene before Austin really had an independent theatre scene. Austin Civic Theatre – the community group that later became the Zach Theatre – was producing regularly, and the Zilker Summer Musical was an annual fixture in the dog days, but there was little else in terms of local stage work outside the University of Texas Department of Drama.

In the mid-Sixties, though, Carey started to mount everything from Alfred Jarry's Ubu Roi to cutting-edge one-act plays by the likes of Edward Albee and Jules Feiffer to Alice in Wonderland, adapted for puppets, all on a four-by-eight foot plywood stage in her living room on a property where Dobie Mall stands. Audiences entered through the alley, which prompted Carey to dub the theatre No. 1 Poker Alley. It was there that she founded a group called the Bijuberti Players, a professional nonprofit that later produced work in other venues (such as the Catacombs, a space in the basement of the Goodall Wooten mansion – currently Hotel Ella – when it was a student residence hall) and under other names, such as the Bijuberti Puppet Guild, which consisted of Carey and creative partner Patricia Fiske creating puppets and puppet shows for the public and for private parties.

In the early Seventies, Carey took her act Downtown, where she founded the Creek Theatre, a community theatre stuck back among the dives and shoeshine parlors of East Sixth when it was not a place many Austinites visited after dark. The venue over Waller Creek was so tiny that the actors had to leave the building to get across the stage. One of the theatre's claims to fame, though, was that the Gilbert & Sullivan Society of Austin was founded there in 1976.

Carey's most enduring legacy today, though, is the theatre she founded in 1982 as Hyde Park Showplace. She took over an old post office building on 43rd Street and turned it into a space where she could present cultural entertainment to the community and provide a facility in which other community groups could do the same. In addition to the children's theatre that Carey's Bijuberti Players offered, the Showplace was host to all manner of gatherings, from productions of new plays by Austin writers (still a novelty in the early Eighties) to Sunday afternoon jam sessions for jazz musicians led by the great bassist Gene Ramey. In 1985, she turned the venue over to a fellow polymath of the stage, producer/director/playwright/actor/designer Ken Johnson, who renamed it Hyde Park Theatre and laid the groundwork for the venue that still exists there today.

Somewhere in that span of years, Carey also managed to stage melodramas in Wimberley every summer for more than 20 years, co-found the Austin Traditional Jazz Club (now Society), and help establish the Austin Circle of Theaters – originally a social organization that met monthly at the Old Spanish Village on Red River. That was the group that launched the B. Iden Payne Theatre Awards in 1974, initially a means to honor Dr. Payne, the legendary director of Shakespeare who taught at UT for many years. It's a measure of Carey's standing in the theatre scene that she was only the fifth person to receive the B. Iden Payne Special Recognition Award for outstanding contributions to Austin theatre.

That was in 1979. The previous year, the American Association of University Women had named her Outstanding Woman in Drama in Texas. In 2012, the Austin Critics Table inducted Carey into the Austin Arts Hall of Fame in 2012.

Preceding Carey in death were her husband, "Buster" Duane Earl Carey; their daughter, Linda; and a grandson, Jeffrey Dean Breakey. She is survived by two grandchildren, Lisa Kimberly Breakey and Duane Earl Breakey. 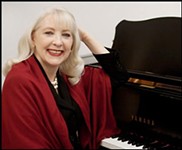