Into the Woods at Scream Hollow

Behind the scenes at the local destination horror house No clowning around at Scream Hollow

The woods may be dark and deep. Yet no one calls what lurks behind the trees at haunted attraction Scream Hollow lovely.

Norm Glenn is a 20-year veteran of the Texas haunt scene, most notably for seven years behind the scenes at Austin's Mansion of Terror. When that particular nightmare faded in the post-All Hallows' Eve sun, Norm turned his gaze to a new chance to scare: Scream Hollow, a 20-acre, three-house haunt in Bastrop.

It was a big change from the days bouncing from strip mall to strip mall every Halloween, but that's exactly what he wanted. "We wanted a permanent location, and we said, 'If we're going to have a permanent location, we want a creepy-ass forest in the woods, and we're going to build a bunch of buildings, and it's going to be all things Halloween.' Some 70,000 man-hours later, we opened last year."

But haunting is a lot more than just running around in a mask shouting, "Boo!" Fortunately, Glenn said, with all his prior experience at the old Mansion, "We had made a lot of our mistakes in just how to run a haunted attraction." However, this was still a whole new realm. First, he looked at around 200 ranches to find the right location: near a forest, with access to a major road. The Smithville location gave him exactly that, plus it was close to Austin, while near enough to San Antonio to tap into its vast horror market. He's even getting a big contingent from Houston, with around 5% of attendees making it all the way to the woods east of Austin.

That still left Glenn faced with daunting new practical challenges. "It's 16 buildings in the woods, and the haunts themselves run across six acres, so just getting your infrastructure, your power and your water, is an enormous feat."

Yet the site also provided real opportunities to create a totally immersive environment, from first shriek to last hell-for-leather sprint for daylight. "Traditionally, people will go to dinner, they'll go to haunted houses, they may go listen to some live music afterwards. Here, it's a whole evening experience. We have the Cackling Witch Cafe; we have the Rabid Bat, the only vampire bar in Texas; and we added in a stage for live bands and retail vendors."

And then there's the attractions themselves. The location is creepy enough. ("It's so heavily wooded that, at night, if we don't light it, you can't see two feet out into the tree line.") Beyond the forest, Zombie City is a complete Eighties main street, with gas station and added monsters. Slaughter Circus isn't just the same old evil clowns, but instead it's evil clowns against flesh-hungry hillbillies, after the carnival picks the wrong abandoned farm to infest. Glenn says, "There's a war between carnies and clowns and cannibal rednecks, and you're in the middle of it. Who doesn't love that?" 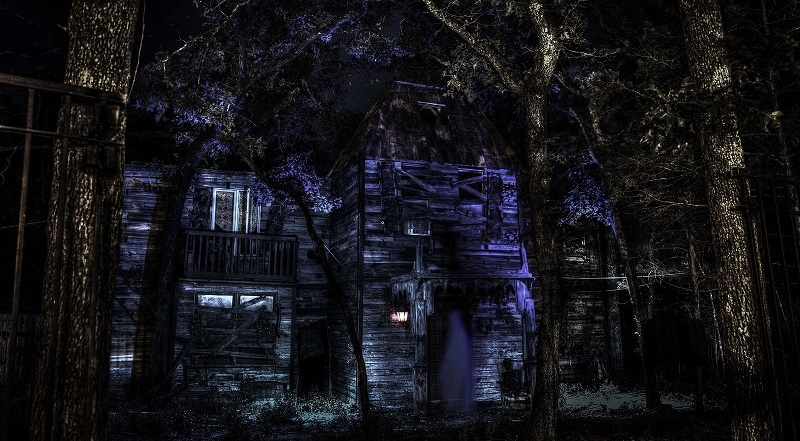 Much more than a cabin in the woods: the Mansion of Terror, built anew at Scream Hollow

Last, but far from least, is the Mansion of Terror itself. Glenn couldn't leave those old bones behind, so he conjured up the classic Austin haunt as a way to play with the grand traditions of the American haunted house: "Supernatural, voodoo, Ouija board, curses, all those things that creep people out."

The new location also allowed Glenn to fulfill an old dream. Back in the strip mall days, the mansion was always just an indoor facade. "I always said, if we get to do the next-generation wicked Halloween park, we're going to build an actual mansion. So when I did Scream Hollow, I said, 'Dammit, we're going to have a mansion.' Now we have a two-story mansion, and we actually dug a basement. So now you have to go into a real creepy basement, and there's stuff down there waiting for you."

That growth in complexity may be the real story of Scream Hollow, and the entire haunted house industry. Movie effects have pushed them to be more innovative and extraordinary, with interactive computer effects beginning to complement the ever more elaborate costumes, makeup, and animatronics.

Yet Glenn, a scarer at heart, still finds time to put on the makeup and leap out of the shadows. He says, "Every year, I dress up for one night, and I go in the house, and I scare people. I don't tell the staff what night it's going to be, and I don't tell them what costume I'm going to wear." It's become a game for the rest of the team to work out whether he's witch or warlock, clown or zombie, and that's why the Scream Hollow team is so willing to follow Glenn into the woods. "Your crew appreciates it when the owner is willing to do the other roles," he says. "It's a respect thing, and I love it."