Pleasure of the Paynes 2016 Sometimes at a ceremony where awards are being handed out, there's one show that just seems to have generated some special magic and on which a lotta love is lavished. So it was at the 42nd edition of the B. Iden Payne Theatre Awards on Monday, where the Vortex Repertory Company production of Terminus received a total of 11 awards.

Gabriel Jason Dean's drama of a family caught between the past and the present was voted the 2015-16 season's outstanding original script, and Vortex's staging took home the award for production of a drama, with Rudy Ramirez honored for his direction. The lead actress and actor prizes were given to Jennifer Underwood and Jacques Colimon, respectively; Cara Canary received the outstanding young actress award; and the entire cast was honored for its work as well. The show's designers weren't ignored either, with awards going to Ann Marie Gordon for her set, Patrick Anthony for his lighting, Helen Parish for her props, and David DeMaris for his sound.

Among the special honors handed out by the Payne Council was a Distinguished Service Award to photographer Steve Rogers for his efforts in chronicling the work in Austin's improv and performance communities and an award to Steven Fay, a longtime member of the theatre community who has contributed years of service to it, with a significant portion of spent as a volunteer member of the nominating committee for the Payne Awards.

Cast of an Improvised Show
Dinner for Six, ColdTowne Theater

Production
Doper Than Dope, Institution Theater, Base Reality Productions, and Heckle Her

Musical Direction
Austin Haller, Sunday in the Park With George

Featured Music Performance
The consort, The History of King Lear

Visual Voice Interpreting
For audience engagement across the community

Witchcraft in Her Lips
For adaptation and dramaturgy

Tara Cooper
For the mask designs for Mr. Burns, a post-electric play 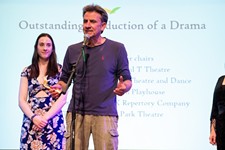