A Bicycle Built for Tunes 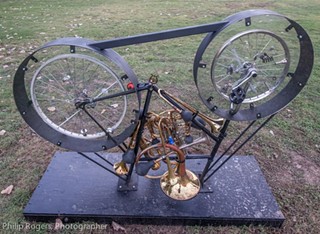 Bicycles aren't just for personal transportation anymore. You can also use them to make music. Well, there's one of them you can use to make music: Steve Parker's Lo Fi Cycle, just installed on the Long Center lawn as part of Art in Public Places' TEMPO program of temporary art installations.

Leave it to the musical mastermind behind the award-winning Traffic Jam concert, which included compositions for an orchestra of car horns, trombones and pedicabs, and upside-down bicycles, to exploit more of the musical potential in the humble two-wheeler.

In one sense, Lo Fi Cycle is just the tricked-out bike we rode as kids – horn on the handlebars and playing card clothespinned to the spokes – taken to an absurd extreme: something like 10 antique brass horns of assorted sizes that, when their bulbs are squeezed, emit squeaks and squonks of different pitches; and a number of odd metal objects that are attached to different spokes so that when the wheel turns, the objects slide up and down the spokes, making a variety of percussive sounds as they bang against the rim. And some of the spokes have been replaced with guitar and bass wire that will further expand the kinds of sounds made when the objects move along the spinning spokes.

In a more imaginative sense, though, it's a Frankensteinian mash-up of work by artists who never worked together but should have, in Parker's mind. He describes Lo Fi Cycle as an imagined collaboration between Marcel Duchamp and Frank Zappa (who actually performed music on a bike on on The Steve Allen Show), with the pair taking inspiration from John Cage. The wheels are “prepared” in the way that Cage prepared pianos for certain compositions, with items affixed to the strings to alter their natural sounds into unexpected sounds or noises.

The idea is for any passerby to make music with the bike sculpture/instrument, but Parker has also arranged for some professional music makers to play Lo Fi Cycle over the next month. First up on Fri., Oct. 7, at 5pm, are multi-instrumentalist Henna Chou and percussionist Thor Harris. On Sat., Oct 22, 6:30pm, it's choral conductor Brent Baldwin (Panoramic Voices). And Sat., Nov 5, 8pm, it's audio artist and sound designer Alex Keller. All concerts will be on the lawn between the intersection of South First Street at Riverside and the Cap Metro bus stop.

Lo Fi Cycle will be in place at the Long Center through Nov. 18. For more information, visit Steve Parker's website or the AIPP Facebook page.