The Buzz on Buzzkill Comedy

The weekly stand up night has two new hosts

The host and founder of Buzzkill at the Buzzmill, Katie Pengra, has left the weekly show and placed it in the capable hands of two new hosts. Like an almighty hydra, one goes, two more take its place. But just who are these couple of comics? 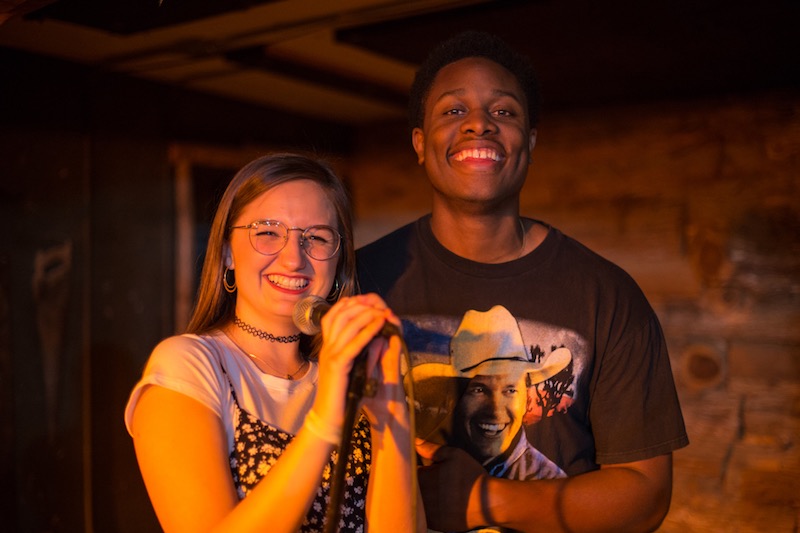 Among the plethora of Austin stand-up showcases one can find any given night, one might consider Sure Thing, hosted by the intrepid duo of Brendan K. O’Grady and Duncan Carson, or maybe Chortle Portal, hosted by UT students Andrew Clarkston and Andrew Dismukes. One may also consider the three year running Buzzkill at the Buzzmill, which now boasts its own pairing of hosts: Allison O'Conor and Devon Walker.

Sept. 28 was the duo’s premiere showcase, and what a show it was. O’Conor and Walker opened the event with some charming banter about their lives and thoughts on the world. From the get-go, it’s evident they have great chemistry: bouncing off each other with ease and chiming in at just the right times. Their friendship clearly shows.

Not long after getting things started, the hosts threw it to the acts for the night: Aly Dixon, Roxy Castillo, Justin Hicks, Danny Goodwin, and Elizabeth Spears all populated the bill. Last, but certainly not least, the ever-hilarious Daniel Webb closed the show up to hearty laughs from the audience. All in all, Buzzkill’s first show with its new hosts went swimmingly, and if the rest of this pair’s shows are anything like their first, guests can expect to be thoroughly entertained.

After the show, I had the opportunity to chat with those charismatic hosts, Allison O’Conor and Devon Walker. O’Conor, who happens to be captain of improv troupe Gigglepants at UT, tells me that she and her co-host had been wanting to host a show together since the spring. “We had been looking at different places, and nothing was really matching up to what we wanted in a show I guess. Then Katie kind of dropped from the sky and messaged Devon [about taking over the show].” Walker chimes in, saying, “She approached me a couple of weeks back and I said, ‘I’ll only do it if I can bring Allison O’Conor on.’ That was my one hard rule.”

As to why the duo wanted to take on the task of hosting a weekly showcase, O’Conor responds, “I think we just like each other’s comedy and had been doing it about the same time.” Their comedic styles play off each other nicely, which is why they make a great pair. “Allison’s style is a lot more observational than mine. She has a lot of bits about things she overheard, or the way other people act. She has a lot of bits about her friendships,” says Walker. O’Conor describes her co-host as more inward. “He goes into himself and talks about his relationships with people and things in his life, and talks about personal anecdotes.”

Hosting can be challenging, but they’re up for it. Walker tells me he’s very much a “stand-up boy.” “I’m just expressing my ideas and my views and my opinions all the time, so that’s going to be a learning process. Allison will probably be good about working together onstage because she has that improv background.” As far as hosting goes, they plan to curate a good selection of comics each week. “It’s a showcase, so we’re trying to showcase the people that are here, and we’re doing our thing up top. I think it’s fun,” O’Conor tells me. Both are excited to be taking on this new endeavor, and see it as a great thing.

In addition to hosting their own weekly show, the Buzzkill hosts can be seen regularly at comedy venues around town doing their own things. Allison O’Conor is performing at Hell Yes Fest in New Orleans on Oct. 14 & 15. Her co-host, Devon Walker, will be performing at Empire Control Room on Nov. 13 for PBS’s Stand Up Empire. But you can be sure to catch them at the Buzzmill every Wednesday at 9pm - same buzz time, same Buzzmill.