SOS to Council: Save Our Spaces While Austin city council members hunker down over next year's budget, local musicians and artists are assembling to make sure their elected representatives and city staff don't forget them or the Mayor's Omnibus Resolution. They'll march on City Hall this afternoon – Wed., Sept. 14 – at 3pm.

The Austin Creative Alliance has organized this “Save Our Spaces” performance art march to remind those in charge of the municipal pursestrings how much Austin's art studios and galleries, live music venues, theatres, and other exhibition and performance spaces need support during this period of rapid growth and rising rents that are closing down creative spaces and sending artists and musicians packing for communities with a lower cost of living. Mayor Steve Adler put the perilous state of the arts on the front burner back in February when he unveiled his Omnibus Resolution, backed by members of both the Music Commission and the Arts Commission. Since then, those two bodies have held public meetings together and separately to gather input from their constituencies on how to prioritize the next steps for the city, and city staff has delivered a set of recommendations from which the city can determine ways that it might stabilize Austin's music and creative ecosystem.

With so many competing interests for city funding and the usual constraints on how much money is available, it's easy to imagine the Omnibus Resolution programs and the needs of the creative industries getting lost in the budget shuffle or being completely ignored. The ACA is hoping to draw some necessary attention back to the crises facing local creatives with today's march.

The Alliance is calling for musicians, artists, creatives, and their supporters to gather at Trinity & Second Street at 2:30pm. Then at 3pm, the Austin Arts Resurrection Marching Band will lead the march six blocks west to City Hall. A rally at 3:30pm will feature ACA Director John Riedie and Jenny Larson and Florinda Bryant of Salvage Vanguard Theater speaking on "the necessity of investing in arts and music, and understanding that the return on that investment is both our city’s soul and it’s continuing ability to attract tech talent," says Riedie. He adds that a letter will be delivered to council members "reminding them that arts, culture, and music brought the world here and can’t be taken for granted." The letter will also ask for a time to brief the council on "revenue-neutral investment ideas."

The ACA is anticipating 150-200 people to join in the march. For more details, go here. 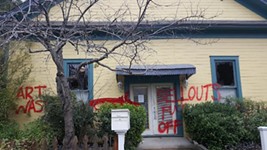 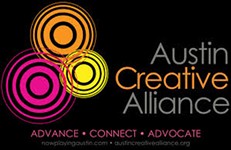 The Contemporary Austin Finds Its New Head in the Headlands
The museum's new director, sharon maidenberg, has run a renowned multidisciplinary arts center in the Bay Area for 10 years