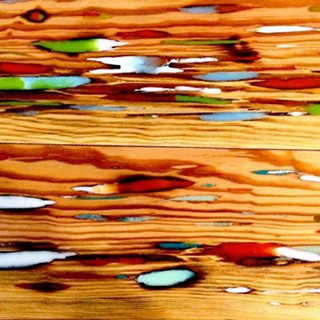 “There’s an idea I’ve been exploring for the last few years,” says Brian David Johnson, “and maybe it’s a bit of a cliche, that we’re all part of one giant connected system and the universe is just this big blanket of energy. Like, we’re not born, we don’t die – we just bubble up out of something and then bubble back down. And that idea brings me a lot of serenity.”

Johnson’s a woodworker, and his best-known objects, so far, are these series of vessels he’s made – tiny vases, mostly, in which you’d display a single fresh flower or two. (You might’ve already seen the elegant things at Parts & Labour on South Congress, or in the Blanton Museum’s gift shop – or maybe at Maker and Moss in San Francisco.) The vases are built from carefully joined layers of wood and embedded with streaks of resin that resemble, most often, veins of turquoise or chrysoprase rippling through the smooth warm surface of each object.

”What I’m doing with the lines of resin,” says Johnson, “I’m playing off the grain of the wood, making sure the lines relate to the material. And I’ve developed this new technique where I can sort of erode the grain and then fit the resin into it, cutting out the middleman and going straight to what’s most inspiring about the wood and just, like, electrifying that.”

Working with these tropes of practicality has led the artist to other, non-functional creations that are complicated beyond what first meets the delighted eye.

“I did this big piece called Coded Connection for DUE EAST last year,” says Johnson. “It was in three parts and there was a Japanese tanka poem imbedded in it.” He arranges lathed sections of wood upon a table in his Cloud Tree space on East Fifth as he tells me this, the smell of fresh coffee wafting in from the gallery’s adjoining kitchenette. “I’d had the poem translated into Morse code,” he says, “and then inlaid the code symbols in resin across the top of the triptych. There was a sound component, too: You could follow a link online and hear the code being tapped out.”

But even the Cloud Tree situation isn’t completely exclusive: Johnson shares the handsomely refurbished space with his sister, Laura Lynn Johnson, a licensed art therapist – and with jewelry designer and beekeeper Anna Gieselman. And the gallery is usually embellished with sculptural works by Ryan McKerley and Hawkeye Glenn and more, the walls adorned with paintings by Ethan Azarian and various other friends that Johnson’s made over the years and promoted in shows like last year’s glorious “Vessel” exhibition at Utility Research Garden.

“Being at the Splinter Group for so many years, among all those great artists,” says Johnson, shaking his head, barely able to believe the memory of his good fortune. “Being next to Andy St. Martin and his paintings and ideas all that time, watching his work develop – Andy’s done nothing but paint for a long time now, he’s the real deal. He’s just – ” he grins “ – inspirational.”

But now here comes the first big solo show by Brian David Johnson at Cloud Tree Studios & Gallery. It’s called “I Am You: Reflections on Connection and Independence,” and it begins with a reception on Friday, Sept. 16, at 6pm.

“It’s gonna be nothing but sculpture,” says the artist. “Wall sculptures embedded with poems – some coded, because I like the idea of the message being something you have to work for – but some done with the NATO phonetic alphabet, too, so they’ll be easier to figure out. I did a big body of writing about ideas of connection, and now I want to put it into the work, so the sculptures aren’t only visually beautiful.”

No, Johnson’s array of new wood-and-resin creations won’t be only visually beautiful at this weekend’s “I Am You” reception. But they’ll certainly be that as well.