Steve Rogers Is the Man Who’s Shooting All Those Performers 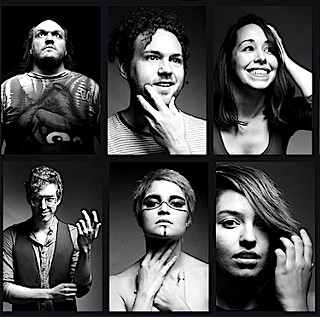 Look at all the people up against the walls of that elegant coffeeshop downtown, all those images in postersized black-and-white, captured with a Canon EOS 1Dx camera by longtime local lenser Steve Rogers: Human figures as still in their frames as they are mobile onstage.

“Longtime local lenser,” we say, because Rogers lives in Austin and has been taking photos of the improv scene here – and the greater theatre community of which it’s a vibrant part – and he’s been doing this for years and years and years.

Which helps explain why these portraits look so damned good.

But, you know, there’s always some kind of visual adornment on the walls of that Hideout Coffeehouse in the bustling heart of Austin, Texas. There have been paintings, of course. Pen-and-ink illustrations. Paper-cut masterworks and collages. Limited-edition prints. And so on and so on, over the years. There’s a regularly refreshed display of creative graphics – curated by Jessica Arjet, one of the venue’s three owners – improving the familiar verticals of brick in the interior of 617 Congress Avenue.

So – why these faces? Why this photography? Why Rogers? And … why now?

“This portrait project came out of Subject to Control,” says the affable lensman.

[Note: He’s talking about a recent show at the late, lamented Salvage Vanguard space, a show – written by and starring Kaci Beeler and Curtis Luciani – that had audiences laughing harder and thinking more deeply than they’d done in months.]

“Kaci and Curtis wanted photos with dramatic lighting for the show’s promotionals,” says Rogers, pausing to chat in the midst of last week’s Out Of Bounds Festival. “So they came in, and I had a unique light set­-up for them. And I was shooting them in color, then converting the images to black-­and­-white. And when they saw them, they were like, ‘Whoa, that’s stunning.’ So I figured I should make further use of the set-up, and I went out looking for volunteers, saying ‘OK, who wants to sit for some portraits?’ And I got 16 people, and we did a week of shoots, and they looked great. And Jessica Arjet sat for me, and I asked her if there was any opening in the gallery. And she says, ‘Can you be ready by July?’ And this was early June. And I thought, OK, if I’m gonna do this, I’ll need another 16 people really quick. Luckily, I already had a waitlist going – and this portrait series is the outcome.”

That’s a solid investment of time and effort, even for a relentless shutterbug like Rogers. But in addition to the project being work, he says, it was also fun. “I got to shoot people like Jason Vines, you know – and he gives me a hundred faces in five minutes, just so much to work with. And a lot of the sessions were really empowering, because some of the people I knew really well, and some were just Facebook acquaintances, but I got to know more about all of them. And that’s kind of necessary for portraits, because the goal is to capture who these people are, not just get another pretty face on the wall.”

Still, if you want to see a wall (three walls, in fact, and large ones) bright with portraits of humans of various levels of prettiness – and goofiness – and quiet dignity and power? Then you want to check out the Hideout while this exhibition’s still on display, maybe even give it a look with the photographer himself at tomorrow night’s reception.