Nisi Shawl Is Crossing the Streams of Fantastical Fiction 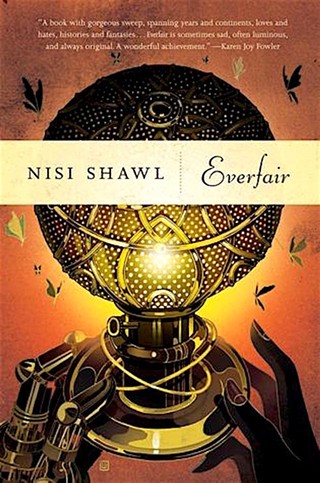 Malvern Books is a bookstore on 29th Street in Austin, Texas, where you can learn what might have come of Belgium's disastrous colonization of the Congo if the native populations had learned about steam technology a bit earlier.

That is, you can learn such a thing from Nisi Shawl’s novel Everfair – which the author will be presenting as part of the latest iteration of Fantastical Fictions.

“Shawl is an African-American writer from Seattle, and she’s probably best known in general literature for Writing the Other, which is a handbook on writing about people whose race, sexual orientation, age, ability, religion, or sex is different from your own. This Everfair from Tor is her first novel-length work. It’s an alternate-history narrative – kind of steampunk, maybe dieselpunk, if you wanna tag it with generic buzzwords.”

So says Christopher Brown. But why should we listen to him?

Because Christopher Brown knows what’s up in the realms of science fiction and fantasy or whatever else you might want to throw into the vast carbon-nanotube-woven basket called “fantastical fictions.” Because he’s an author of such things himself, when he’s not busy lawyering up precedents in some legal case or other. And especially because he’s the host of Fantastical Fictions.

But Brown didn’t start this literary-celebration series, please note. That was another author. That was Rebecca Schwarz.

“Rebecca’s like the local grand dame of genre fiction,” says Brown, adjusting his stylish specs in the coffeehouse where we’ve met – on one of those rainy days that occasionally float cars down the street. “She’s involved in all these different writing communities, and this Fantastical Fictions was her idea.”

“I do NoConBarCon and this event,” says Schwarz. “And every other month, we bring in writers to do a reading. They don’t have to be from the small press, necessarily, but just people who have different perspectives on literature. Nisi Shawl’s very established in the genre – well, I’ve been reading her for a long time – but it’s also newer people. It’s a chance for authors to read in an intimate setting, and to get exposure here in Austin. It’s also an opportunity for discussing genre – a little conversation, a little Q&A, talking about, you know, ‘What is fantastic fiction, and where does it fit into the genre landscape?’”

“We’ve had Bruce Sterling – and his wife, Jasmina Tešanović,” says Brown. “We’ve had Howard Waldrop being interviewed by Bradley Denton, and they wound up talking about JFK’s assassination. We’ve hosted Marshall Ryan Maresca and Stina Leicht introducing their new books. Rick Klaw – he’s written for the Chronicle – he recently came in and gave a presentation about ‘Apes and Literature.’”

“It’s good to bring people in, give them a chance to browse around a bit,” says Schwarz, glancing out the window at a flash of lightning. “The store’s so rich with books you don’t see anywhere else. I used to be a librarian, and I’m in bookstores all the time. But, Malvern – there are books from publication houses I’ve never heard of. It’s such an esoteric yet appealing place.”

We concur. And reckon Malvern will possibly be even more esoteric and appealing on Friday night, when Nisi Shawl shows up with that already well-received Everfair of hers.