The world is often a dark and hideous place, filled with disaster, idiocy, cruelty, and stupidity. I'm a firm believer that one's choice in literature should reflect that in as jovial a fashion as possible. 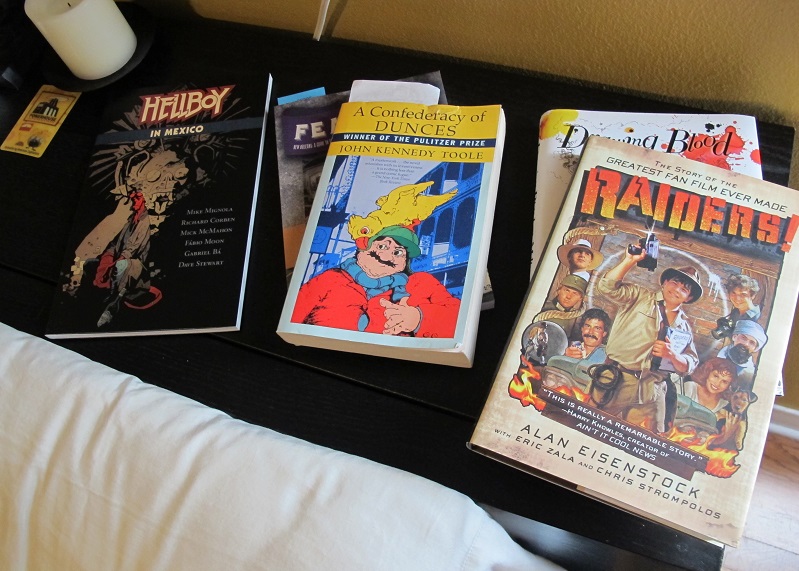 Not shown: fat cat refusing to move off the bed while this photo is taken

This is the latest collection of Mike Mignola’s demon-slaying scarlet hero, and a throwback to the early, lighthearted antics of the original two-fisted, Nazi-busting antics of the original miniseries, The Conqueror Worm. That’s welcome, because the writer/artist recently completed his 22-year story cycle with the darkly metaphysical Hellboy in Hell. This being Mignola, it still ties in to the bigger story, but it’s a joyous diversion, recounting Hellboy's lost year and compiling a series of one-shots filled with dusty madness, such as Frankenstein's creation pulling an Elmer McCurdy.

It highlights Mignola as a great collaborator, and anyone who finds no pleasure in Richard Corben drawing supernatural luchadores really should give up on horror comics, because they’re clearly not for you.

Book I'm Currently Reading:
Having only one book on the boil is pretty antithetical to my approach to literature, and there are often exterior reasons affecting why a couple of tomes are swapping position near my hand. So blame a recent trip to New Orleans for both John Kennedy Toole's A Confederacy of Dunces (Grove Weidenfeld, 405 pp., $16) and Michel Murphy’s Fear Dat: A Guide to the Voodoo, Vampires, Graveyards & Ghosts of the Crescent City (Countryman Press, 208 pp., $18.95).

Actually, credit for Confederacy goes to my wife, who pretty much thrust a copy in my hand after we returned. While New Orleans has undoubtedly changed from the city that plagued blustering buffoon Ignatius Reilly, there’s also a certain recognition that brings back the smell of magnolia and Bourbon Street.

As for Murphy’s guide, I am a perennial sucker for a good ghost story – in fact, I don’t believe you’re a real city unless you have at least a couple of rival nighttime tours arguing about exactly how many specters are visible through which window of the house that had three (or was it seven) plague/murder/scrofula victims sealed away. Murphy’s jaunty tone and sense of good old-fashioned creepiness revels in the city’s taste for the gothic.

Book I Plan to Read Next:
There is always a text glowering at me from the corner of my ever-increasing tower of “I really should get round to that soon,” but top of the heap is a brace of signed editions that I feel a more than mere moral obligation to finish.

Molly Crabapple is helping redefine contemporary journalism (although she’ll probably laugh if she reads that), and her autobiography Drawing Blood (HarperCollins, 252 pp., $29.99) promises all the talent, humor, humility, fury, and endless energy that is her hallmark.

Dedication of a different kind in Raiders!: The Story of the Greatest Fan Film Ever Made (Thomas Dunne Books, 320 pp., $25.99): Alan Eisenstock’s literary companion piece to the documentary of the same name, about three Mississippi teens that filmed (well, videoed) their own shot-for-shot remake of Raiders of the Lost Ark, promises to fill in some more of the blanks on this deranged story.

Plus, having met and interviewed both Crabapple and the Raiders guys, there’s a certain pleasing intimacy about reading a book and hearing everything in the subject’s voice.

Richard Whittaker is a staff writer for The Austin Chronicle, and contends that professional wrestling is the pinnacle of human achievement.