When the Chronicle decided to have a Summer Reading issue, as the resident “video-game person” I contacted Boss Fight Books about getting review copies of its signature series. The 11 books (and counting) are physically and thematically compact. In other words, perfect accompaniment to the myriad seasonal distractions that await.

Each tome dives deep into a specific game, be it a classic (Galaga), a modern favorite (Spelunky), or an obscure object lesson (Bible Adventures).

The consistently and minimally decorated series may not be welcoming to the uninitiated. The stark photos on the covers and author pics on the back are the only images you’ll find – no screenshots, no concept art, no barely yellowed pages from issues of Nintendo Power. Just the author’s voice inviting you into a world he or she has obsessed over for months, years, or even decades. But even when the landscape is foreign, having such a passionate guide makes all the difference. All of this is to say that other “Bedside Manner” columns may wow you with eclectic picks, my dogged consistency is fueled by the single-minded charm of these books. 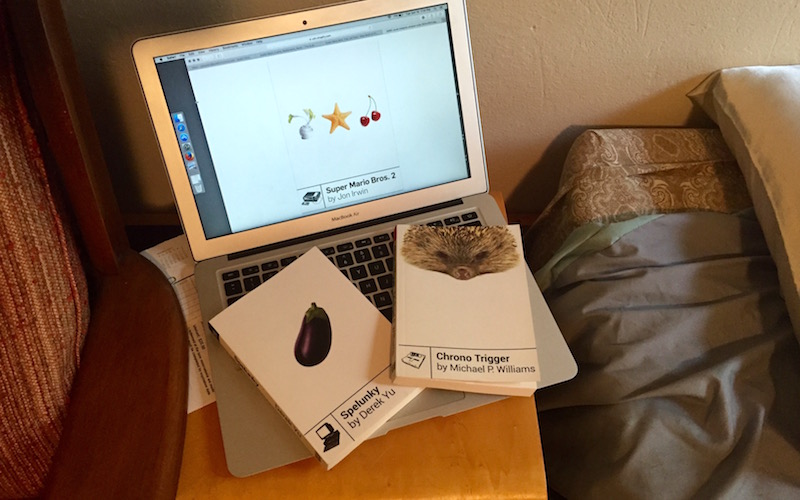 The publisher sent me physical copies of two of the books and digital versions of the rest. One of the two paperbacks was the title I was most interested in reading: Spelunky. The only book in the series to be written by the game’s creator, Derek Yu splits his time describing the personal journey of making the hard-as-nails cult favorite and describing his design decisions. That may not sound like riveting reading, but for a game praised for intricate internal logic that constantly surprises even veteran players, it’s the kind of insight Spelunky deserves.

The other physical copy I devoured last weekend explored the classic RPG Chrono Trigger. Even though this lauded title from the 16-bit era was not part of my childhood, Michael P. Williams’ reminiscences of obsessively playing the time-traveling game were all too familiar. Williams is not alone in his regard for Chrono Trigger. Few art objects can make an online community hotly debate various translations, a topic Williams artfully explores in one chapter. In between similar engrossing academic explorations lie insightful tales of the possibilities and impossibilities of capturing the magic of adolescence.

So many things are wrong with Super Mario Bros. 2 … the game, not this book of the same name. The aberrance of 1988’s sequel to the original of originals makes it one of the most beloved and maligned titles in Mario’s ever-expanding canon. I’m only halfway done, but Jon Irwin has, so far, smartly eschewed personal remembrances for all the juicy details on how Nintendo transformed Doki Doki Panic into SMB2. Irwin has clearly done the legwork for this book, getting interviews with Nintendo reps of the day and putting into focus one of the game companies’ biggest cover-ups that was never really meant to be hidden.

Book I Plan to Read Next:
Bible Adventures, Shadow of the Colossus, or Jagged Alliance 2 (Boss Fight Books, $14.95 each, paper)

These next few books will have to be real lemons to make me not read the entire collection. Should I try the doomed Christian game Bible Adventures? Maybe a trip down memory lane with Shadow of the Colossus before that game’s creator unleashes his long awaited follow-up, The Last Guardian. Or just a wild card like Jagged Alliance 2, a game I know nothing about. But I will soon enough.

James Renovitch is the web editor at The Austin Chronicle and also writes about the local video game scene. He's been known to put himself on the cover of the paper.