The Hideout is doing that wild thing they do every year 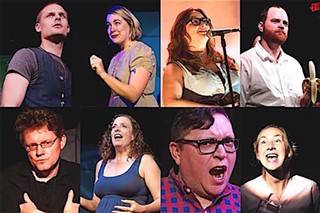 It’s not just that the action is nonstop, with so many troupes from the Hideout and all the other Austin improv venues joining in the madness.

It’s that, as everybody else comes and goes throughout the marathon, eight valiant improvisers will be performing in every single show for 47 hours straight.

Ryan Hill, who produced the thing last year when it was only the 46-Hour Improv Marathon, is among those fateful eight this time. As are local scene stars Ace Manning, Jessica Arjet, Chuy Zarate, Caitlin & Jeremy Sweetlamb, and Rachel Austin.

But, as we say, those are local stars. Because nobody in their right mind would come in from out of town to be a part of this thing, right? Nobody would travel all the way from, say, New York City for no other reason than to subject herself to this sort of creative and comedic lunacy onstage for two solid days-and-nights, right?

Katie Hartman of Skinny Bitch Jesus Meeting is doing just that: She’s the eighth of the relentless group.

“Kaci Beeler asked me to join in on the marathon,” she tells us from somewhere deep within the Empire State’s shadowy SBJM headquarters, “and while I’d seen posts about it in previous years, I didn't really understand what it was. I mean, after performing any more than 45 minutes of improv, I’m usually like, ’Great – now we can drink and do bits for five more hours and then sleep!’ I do love sleep.”

But, ah, she understands now, right? Hartman understands that she’s going to be rocking that spontaneous comedy thing on the various Hideout stages for 47 solid hours, right?

She nods a definite affirmative. “I took a long evening walk around NYC, sweltering in a city that smells of festering diapers from an insane asylum because the MTA is a piece of shit. I think I’d rather do two days of improv straight in the fantastic city of Austin, just to get a chance to escape this place for a spell. So I’m getting in a full day early, to see some friends and get a short vacay before I lose my mind in the land of make-believe. And I’m super excited to do it!”

We reckon the audiences will be super excited to see Hartman back in town, too, working those improv skills with seven other talented (but perhaps slightly crazed) performers until the sun goes down. And then comes back up. And then goes down again. And then there’s another almost full day, isn’t there?

Recommended: See the details here, and catch a few shows (or as much of the marathon as you can) – for yourself, citizen.