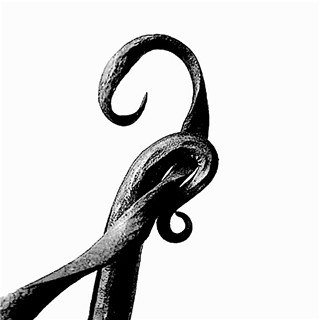 Colin McIntyre hasn’t ripped up the flooring in an ancient Michigan warehouse and reconstructed its warped and thwarted grandeur in Austin this time.

He did that in 2015, as part of his “Shrine of Inevitable Forces” installation for that year’s West Austin Studio Tour, transforming the interior of an abandoned Austin church into an exhibition space for 1) his Hexobelisk sculptures and 2) his sort of painstakingly recreated architectural cover song.

No, it’s that thing Dylan Thomas said about “the force that through the green fuse drives the flower” – that’s more of what’s expressed in this new show, “Circumnutation,” from Dimension Gallery co-founder and blacksmith McIntyre.

“I love working with forms that defy the cold rigidity of the medium,” says the tall, bearded sculptor. And though he did that with Arboreal Passage, his lifesized six-tree arch that marks entrance to the Austin Nature & Science Center, even that Art In Public Places commission was more of a specific portrait-in-metal than he’s partial to.

“I prefer to embrace the power of lifeforms in a non-discerning fashion,” says McIntyre. “I’d rather capture the essence, the grace and beauty of lifeforms, and abandon the sort of representational artwork where you’re representing a particular species. I grew up steeped in science and aesthetics, and I have a real appreciation for science and the determining of species, the subtle variations. But I also like abandoning the whole speciation tendency, so instead of chopping and dividing everything, I go toward the bigger picture, the guiding forces of evolutionary adaptation.”

Which is what’s on display – beautifully on display – in Dimension Gallery’s “Circumnutation.” The sum of which display may be, as they say, greater than its parts. But, oh, there are many parts.

“In this body of work,” says the artist, “each piece is composed of individual elements – they’re all pendulous, hanging elements. And each component is kind of its own piece, and together they’re like chains.”

Like chains of being, maybe, especially as these chains are immutable – unless acted upon by heat and pressure equivalent to what McIntyre’s already expended in their creation? But, ah, now we’re getting tangled in our own chains of thought, influenced as we are by the Darwinian reference of the show’s title. (Note: Circumnutation is the term the estimable Charles used in 1865 to describe the motion of growing stems and tendrils).

To put it more succinctly: You know that thing that plants do, that curvilinear extension of themselves in space, the sometimes helical nature of their slo-mo kinesis? That blatant organic thing that sets them apart from inert matter? That’s what Colin McIntyre has captured, has rendered in cold dead metal.

We recommend seeing what that’s like, especially at the show's Thursday Night reception.