Opening the Book on Roller Derby

Everyone knows Austin is the home of modern Roller Derby. But it's also the home of photographing Roller Derby, and longtime Texas Rollergirls photographer Felicia Graham is crowdfunding a collection of her visual history of the league that started it all. 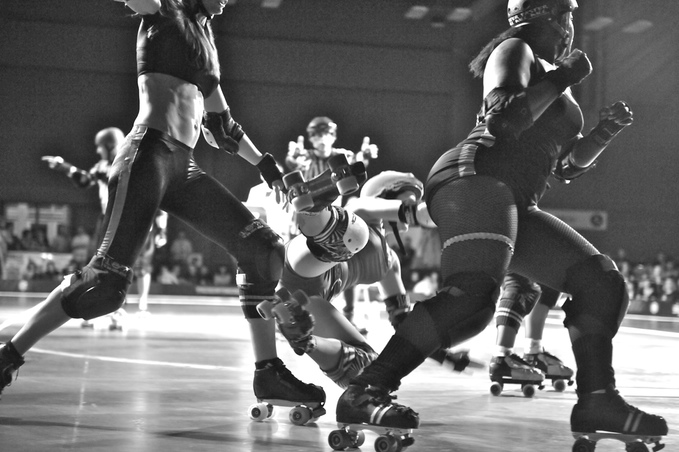 Voodoo Doll and Olympia of the Hotrod Honeys take down Hustler Molotov M. Pale: one of the moments of life on and off the Roller Derby track caught by Felicia Graham, and featured in her upcoming book. (Photo by Felicia Graham)

She’s launching a crowdfunding campaign to turn the best of these shots of life on and off the track into a coffeetable book. Her current target is $25,000 by June 30 to cover publishing costs, but her real goal, she said, "is to show modern-day Roller Derby to the world. Show that these women are unique and different in each and every way, and show the strength and camaraderie they get through the sport."

Graham started shooting Roller Derby in 2005, when she was looking for an off-the-grid topic for her grad studies in photojournalism at UT-Austin. A friend suggested she might want to check out an event at the Austin Music Hall. The friend was Electra Blu – one of the founding mothers of modern derby – and the event was the legendary Texas Rollergirls bout during SXSW. Graham said, "I thought I was going once, just to do it one time, and I was addicted immediately."

Sports photographers don't just photograph a sport. They define how to look at a sport. Like John Zimmerman defined the visual representation of basketball in the Sixties, or Neil Leifer revolutionized the imagery of boxing, Graham and her fellow Derby snappers had to define the visual language of the sport. Yet Graham admits she was initially pretty baffled by the rules of the game. "It wasn't until that first tournament that the girls sat me down and told me what was happening. I was shooting for a full year without knowing how the points were scored."

Yet while many of the early photographers were concentrating on the point-scoring jammers, Graham used her background shooting gigs, "so I have been shooting in low-light situations in shitty clubs for years, and you have to be able to adapt at a moment's notice." She used that experience to catch the whole mood: the blockers, the pivots, the crowd, the bench, "And I think the girls liked that," she said, "They'd say, dude, you were so easy, you didn't ask for anything. Well, I didn't need anything."

Derby is a full-contact sport, and that can translate into full-contact photography. Over the years, Graham has ended up with more than the odd bump and bruise. At the Women's Flat Track Derby Association nationals in Austin in 2007, she was down in front of the Texas Rollergirls' skater bench, catching candid shots. "You can see their eyes getting bigger, and I got hit in the back of the head by a skater's knee pad, and my face smashed into my camera. But I got all the pictures of the girls seeing it happening." 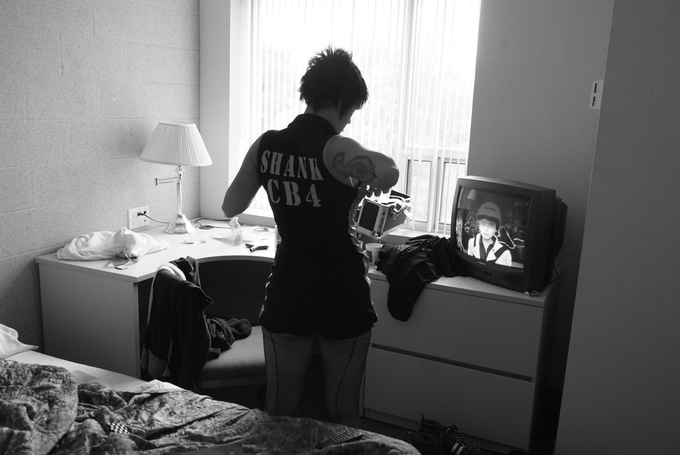 Her work isn't restricted to the trackside action, but also traveling with the teams to bouts and tournaments. That required a certain sense of intimacy, from the hotel room to the locker room to the afterparty: In the early days, she said, "I was the only one covering the girls, and not just the action, so they let me stay there. And me being the first girl to shoot them, I think that also helped form a bond pretty quick."

After 11 years, Graham has assembled one of the biggest visual archives of the world’s fastest-growing women’s sport. Her full collection is "probably hundreds of thousands, but edited down to a couple of thousand." She'd already trimmed down the pile to about 300 of the best for her thesis in 2010, so when she started editing for the book "all I really had to do was go through the past six years."

The plan is to ship the finalized, 200-page book in June 2017, with a foreword by former skater and author Melissa Joulwan aka Melicious, and an afterword from UT photojournalism departmental head Dennis Darling. Graham has been thinking about publishing the collection for over half a decade, since she finished her graduate studies, "But," she said, "life got in the way." Then she took her portfolio to FotoFest, "Where you have 20 reviewers sit and talk with you about your work. I had 20 reviewers who had no reason to be nice to me say that the work was strong enough to be a book, so that rekindled my interest."

Find out more about Graham’s publishing plans at Kickstarter, and see more of her photography at www.feliciagraham.com.