The Art of Elections

Cartoon characters. Kaiju monsters. Video games. Guzu Gallery has held themed shows dedicated to just about every beloved childish distraction. Now they're adding the greatest game of them all, politics, to the list with "POPular Vote", an exhibition of original art in honor of this most dishonorable election year. 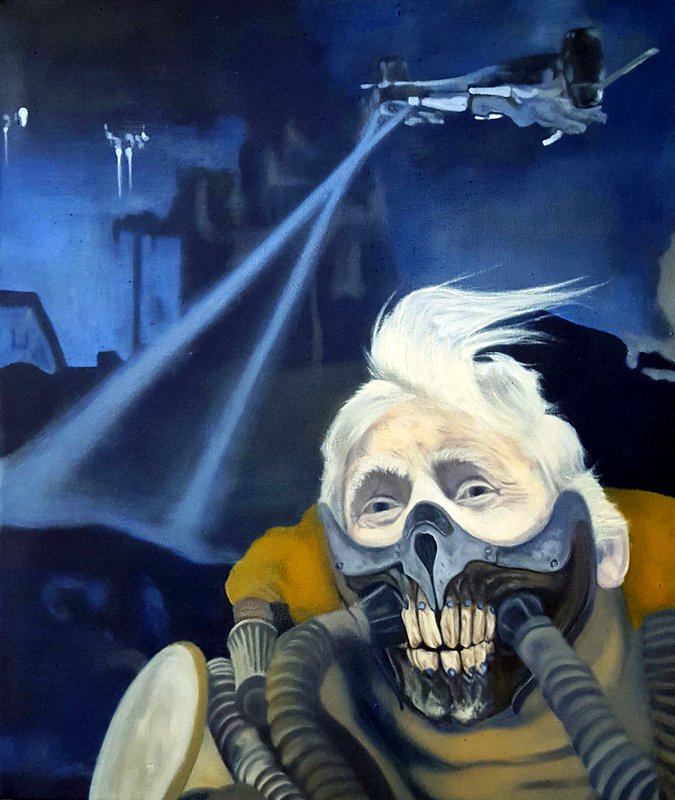 Immortan Drumpf 2029 by Daniel Kreitzberg, one of the original artworks in the "POPular Vote" show at Guzu Gallery, opening this weekend

It's a deliberate change of topic but, according to gallery director Vincent X. Torres, the show will still fit with the pop-art style that has become Guzu's signature. He says, "I didn't want the show to just be a bunch of election posters for the people vying for the presidency."

Instead, he wanted it to run the gamut of political art, from didactic to activist to hilarious. "I wanted it to be a political art show, and I wanted the artists to know that, if they're someone that works in more serious territory, they should do a more serious art piece. If they're an artist who does more satirical or comedic-style artwork, then they should do that."

The timing of the show is very deliberate. Not only does it come as American politics is at mid-primary fever pitch, but it coincides with the West Austin Studio Tour. Last year, Torres couldn't get the gallery schedule to fit with WEST, but, he says, "This year, I wanted to make sure that I had a show that started on that same weekend." That's part of the reason for the political theme. He was looking for something "that has some of the aesthetic that we have in our pop-culture art shows, but take it a little higher, to the lowbrow art world."

So while the style and content will still appeal to the younger art-collecting audience that frequents Guzu, he says, "I know from experience, having gone on the WEST tour, people there are in their 40s, 50s, and 60s, so I wanted to find a theme that they'd be interested in." The politics angle also allowed him to bring in some fresh new talents that have previously not displayed at Guzu. Over the years running Guzu, Torres' standard response to any artist that whips out their phone and offers to show him their work is to get them to email him instead. That way, he's built up a big digital catalog of new talents that he can contact when the right show comes along. "As luck would have it, there were probably four artists in that group of emails that had previously done politically-related artwork before. Some of it was more statement-type artwork, and then something as basic as presidential portraits. That's perfect for this show, because I want that variety."

Being an artist (one-half of art collective Half-Human), Torres knows plenty of creatives in Austin and beyond as fellow professionals. He actually got to know Guzu first-timer Daniel Kreitzberg, who contributes two Donald Trump-themed pieces to the show, because the oil-and-canvas artist brought some of his Half-Human prints. "Over time, I've had a few conversations with him, and I ended up discovering he was a painter. So one day I just said, 'Hey, I'm doing the political show, would you like to be involved?'"