No Garofalo, no problem for this gifted crowd of up-and-comers 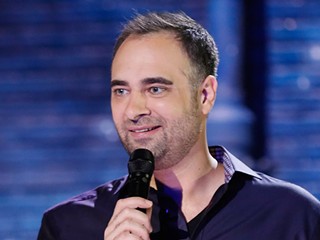 Beginning late Saturday night and going into the wee morning hours of Sunday, the nine participants in the second incarnation of New York’s Finest closed out the 2016 Moontower Comedy & Oddity Festival with aplomb.

Group comedy shows that include more than five people are, of course, only as good as the sum of their parts, and they can be risky if one or two performers can’t carry the weight. Luckily, each of the nine NYC-based stand-ups took the stage in sharp form, making for an appropriately and unflaggingly lovely event at the Stateside at the Paramount.

Janeane Garofalo had been slated to perform (her name is still on the website’s lineup), but for reasons unclear, she never made it. A shame for many in the audience, that left the high-energy work to emcee Sean Donnelly, who no sooner got onstage to introduce Dan Soder than he locked into the strangely huffy couples in the front row. This left the door wide open for Soder, a panelist on Larry Wilmore’s The Nightly Show who was allegedly reeling from a recent breakup. Better comedy fodder is hard to come by than a handsome depressive guy, and the laconic performer worked that line to good laughter. After Soder’s too-brief 15 minutes, Donnelly returned and his pattern quickened: Ask the crowd if they are having fun, then intro the next comedian.

Although I would have enjoyed more of Donnelly, whose body radiates funny with every clumsy half-jump or pelvic wave (he even “danced” onstage last night with no music), his audience stuff opened the door for Joe List and Big Jay Oakerson to do some sensational crowd work. Oakerson’s reputation on this front precedes him, with his most recent special drawing entirely from crowd interactions; but to see him in the flesh is special. A large man, Oakerson spent his set in complete command from a stool, mocking the clothes, faces, and sitting positions of everyone he could find in the front row. I didn’t realize anyone still used the word “lesbo” anymore until Oakerson pasted an unsuspecting woman with the term to her great amusement. In fact, his were the biggest laughs of the evening, while List, a kinder and more quiet personality, brought out responses closer to giggles. List even seemed humbled when his own sex jokes caused scattered claps.

In a jarring jump from List’s more gentlemanly manner, Mark Normand and Nick Mullen performed their best “bro-centric” jokes, like Mullen’s out-of-left-field bit about GNC candy bars. Normand, who took the approximately middle position in the lineup was, like Oakerson, utterly confident. That lent itself perfectly to some amusingly sour thoughts on dating and sex, and to a slightly redundant sensation of “been there, done that” that Normand did not deserve. As Donnelly mentioned, he’s been all over the late-night shows, and his half-hour special on Comedy Central suggests more possibility than the lineup allowed for. Still, several other comics’ performances were more warmly greeted by the audience, particularly those by Jo Firestone, Tony Rock, and the brilliant Kurt Metzger. Firestone’s voice is an amazing tool, a high-pitched whisper with which she sputters out diarrhea jokes and subsequent withdrawals of such. A staple of underground comedy in NYC, with appearances on Broad City and Fusion’s underwatched surrealist talk show The Chris Gethard Show, Firestone has learned to juxtapose her almost childlike warmth with absurdist sex stories and shit material. She seems poised to be the next Jenny Slate.

Rock, too, the comedian I was least familiar with, had a terrific night. He explained that his home had become a den for his pot-smoking friends, and many of his best jokes were about their behavior. But when it comes to sex, drugs, or shit, few comics (in this show or otherwise) can match Kurt Metzger. Metzger is an outrageous commodity, recently demonstrating on the new Louis C.K. series Horace & Pete that he will leave no social bedrock unmined. His eyes go wild at the mention of Jared Fogle; he shakes his head with laughter when mocking Jesus Christ. Metzger seemed aware that his performance was perfectly suited to be the final one in the closing show of Moontower, simply because he would have been impossible to follow.