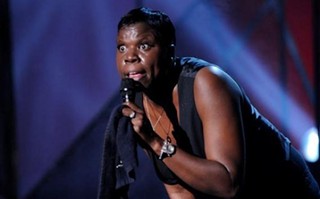 You know what there are just too few of? Mimes. Is not something you thought you’d read today. But then, a lot about yesterday’s Moontower Comedy & Oddity Festival show Leslie Loves Colin (featuring Saturday Night Live’s Leslie Jones and Colin Jost) might appear jarring in print.

Jon Rudnitsky, whose parodies gained notoriety on YouTube and who will join the cast of SNL this fall, opened the show with the somewhat divisive art of mime − a bold move that paid off. The routine started innocently enough with Rudnitsky and an imaginary Jennifer Grey reenacting the closing dance sequence of Dirty Dancing, complete with Bill Medley and Jennifer Warnes' "(I’ve Had) The Time of My Life." Unfortunately, Rudnitsky’s imaginary partner didn’t stick that famous final lift. She didn’t even make it that far, falling victim to a series of escalating mishaps. Rudnitsky can count the performance a win because, as Jost noted when he took the stage afterward, Rudnitsky got the audience to applaud his ill-fated dance partner’s performance − all without saying a word. The whole scene no doubt warmed the Paramount Theatre’s 100-year-old vaudeville-loving heart. Or, at the very least, the weirdos who filled its seats last night sure seemed to enjoy it.

Jost took the stage next, joking a bit about politics and a bit about his current dating status: single. As Weekend Update fans might know, that may not have been a wise disclosure considering Jones sat just offstage. Jones followed with a set so energetic that she legit needed a sweat towel − yeah, like a boxer. Her set ranged from calling out rescue dog owners as “self-righteous assholes” (nothing against the dogs) to joining the women in a theatre-wide pledge to own the title “crazy bitch until the day you die.” She claimed we had earned the right. “Do you understand that we carry around a human in our body like a backpack?” she screamed, from the aisle at audience members in the front row. “Our organs have to move around to make room until we don’t even know where our shit is.” Another reason: “We take dick. Do you know how gangster it is to take dick? You pull a dick out on the biggest motherfucker in this room, he will freak out. You pull that out on a woman, she be like, ‘Whatcha gonna do with that?’” She then moved into some crowd work, discussing with a young couple in the orchestra section some pros and cons of getting older. Con of aging: “You pull your pants down and an angel flies out. I pull my pants down, a fire-breathing dragon flies out.” Pro: The dragon “keeps the dick warm.” Her high-energy, hilarious set pushed the envelope for sure, which she warned about at the beginning of her set. “This shit ain’t gonna be like SNL,” she said. “There ain’t no censors in here.” The crowd must have expected that, and although she still managed to shock a couple times, only once did a joke fall flat. During the crowd work, she suggested that a heavier-set gentleman should have purchased two seats. Probably could’ve done without the fat shaming, but everything else was gold, and she moved on quickly.

The show ended with an adorable bit in which Jost and Jones answered questions about each other. Jones was asked, “What food would you cover Colin in?” She replied, “Something that would make him show up.” Colin was asked, “What scares you more, fucking Leslie or being fucked up by Leslie?” He answered, “Both equally.” In an effort to calm his fears, Jones added, “Fucking me would be awesome, though. It would hurt at first, but then you’d go numb.” Will any of us ever swim in the depth of a love like theirs? No. But at least we get to watch.