Huggable comic charms crowd, tells how to Winnie-the-Pooh it 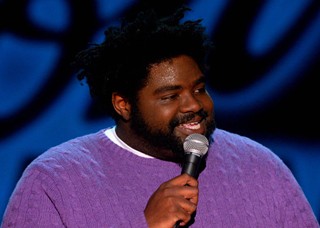 Somebody give Ron Funches a hug.

In his second Moontower show as the Cap City Comedy Club headliner, Ron Funches imagined describing his job to the affluent neighbors in the rich neighborhood he’ll soon call home. “I get stoned and mumble into a microphone,” he said. “Oh, you didn’t know that was lucrative?” Somebody hug him.

Funches plays Shelly on NBC’s Undateable and is a recurring favorite on the Comedy Central game show @midnight. His style blends elements of storytelling with the kind of absurd one-liners found in a Mitch Hedberg setup. Like Hedberg’s now famous signature cadence, Funches has a charmingly distinctive style that’s downright adorable and instantly memorable. At Friday night’s 8pm show, he performed before a full house that was clapping at his punch lines within the first 10 minutes, which seemed to legitimately catch Funches off-guard. It shouldn’t have. There’s just something about his kind demeanor that makes for an immediately fun show. In fact, the night only took a dark turn once, when Funches recounted a difficult evening he recently suffered. “I had been reading too much Goosebumps,” he said, which, he admitted, shouldn’t have happened. “I tell myself, after 10pm switch to Wishbone!” The heavy atmosphere quickly brightened when in a follow-up anecdote he coined a term that future linguists will no doubt dub best new verb 2K16: to don only a shirt, to carry on sans pants/underwear, “to Winnie-the-Pooh.”

Chris Tellez, an Austin-based comedian and co-host of the monthly stand-up/video sketch show, Shit’s Golden, hosted − although he wasn’t able to stay long. “I do have a baby in the car,” he joked. His solid set hit on comedy staples, like family, middle school, stoner roommates, and, of course, Nickelback. Brian Gaar, host of ATX Uncensored(ish), also performed, finding much of his set in the comedy gold of Yahoo! Answers, subreddits, and open letters from homophobes pissed about gay marriage, or as he calls them: “old white people.” Not wanting to generalize too much, Gaar did offer a quick clarification on that. “I hope to be an old white person one day,” he said, “But if your grandfather is mad about something, it’s probably a good thing. It’s progress.”

If you missed last night’s show, Funches will close out this week's headlining gig at Cap City at 8pm and 10:30pm tonight. You can catch Brian Gaar tonight at the Austin Towers showcase and Chris Tellez at the IFC Comedy Crib, both at 8:30pm.