The evening with Short was long on classic comedy 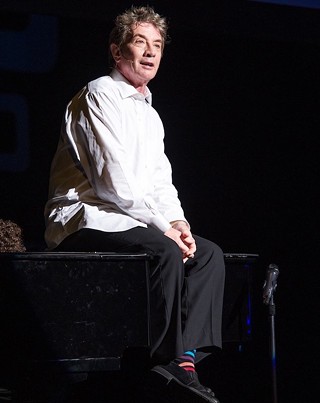 The ticket to Martin Short’s Moontower Comedy & Oddity Fest performance read: An Evening With Martin Short. From the Paramount stage, Short offered a counter title: If I Had Saved, I Wouldn’t Be Here. Let that be a lesson to you, kids: If you waste your money now, you’ll have to perform to a theater full of adoring fans later.

Last night, Saturday Night Live and SCTV cast member, film/TV actor, and comedy legend Short performed a largely one-man show as the headlining act for the 2016 Moontower. His show had a classic comedy feel, complete with PG-13, off-Broadway style musical numbers and an SNL-style roast of celebrities reminiscent of the jabs made by fellow show alums like David Spade and Norm Macdonald. For that segment, Short joked over photos of celebs and politicos as his character Franck Eggelhoffer, the flamboyant designer and wedding planner from the Nineties film Father of the Bride. When a photo of Ted Cruz prompted hissing from the crowd, Short remarked, “It’s like an actual vampire just flew in here!” And in response to the audience’s cheers at Bernie Sanders’ picture, he joked of the somewhat older candidate: “The only time Bernie Sanders doesn’t have to pee is when he is peeing.” The show delivered plenty of nostalgia for devotees of Short’s SNL characters and bits. As his Talk of the Town host Jiminy Glick (complete with fat-suit and latex jowls), Short brought Ray Benson onstage and mock-interviewed the Asleep at the Wheel bandleader. And he attempted, with mixed results, to teach three audience members how to properly execute the Three Amigos salute from the film he starred in alongside Steve Martin and Chevy Chase. He played clips and told anecdotes about his days on SNL. He even touched on what it’s like hanging out with Steve Martin. “It’s just like Deliverance,” Short joked. “It’s all fun and games until the banjo appears.”

While the show catered to longtime fans, there was plenty for newcomers to Short’s work, too. Jeff Babko left his post as keyboardist on Jimmy Kimmel Live long enough to accompany Short on a grand piano, which naturally led to the question: “How does a man sit on a piano?” Short tried a few poses. (None really stuck.) There were other fun cameos, too, including one by Austin’s own Mac Blake.

Overall, the show had the charm and polish that only decades of experience as a live performer can produce. That’s no wonder. “My first love is theatre,” said Short. “Then movies, television, and my family − in that order.” Short (and everyone involved) clearly had a blast performing. Early in the show, he touched on how much making people laugh means to him. “The only difference between you people and pure, pharmaceutical-grade morphine is that morphine doesn’t judge,” Short joked. Of course he doesn’t have to worry about anyone judging last night’s performance. He received a standing ovation.