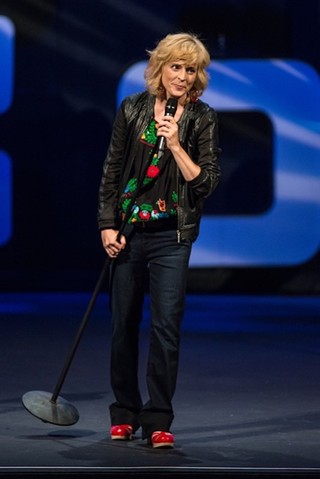 The pain of living has long been a staple topic in the comedy of Maria Bamford, a chemically unstable child of the repressive Midwest who's spent her adult life wrestling with suicidal tendencies and a melange of pharmaceutical aids. But last night, it was someone else’s mortality that Bamford’s undeniable warmth combated: Prince.

For her Moontower Comedy & Oddity Festival headlining gig, Bamford was workshopping a loopy new hour in anticipation of her upcoming Netflix show, Lady Dynamite, and the 500-strong audience at the Paramount Theatre was game for anything, including the “weird shit.”

As has been usual for years now, Jackie Kashian opened for Bamford with self-directed barbs about her sexual style – “much like my comedy: hardworking and earnest” – and body type (Oprah-like). Her bits about online dating, misogyny in relationships, and male comics were a bit taxing, striking my ears as somewhat tinny and hackneyed. But Kashian also spoke openly about her recent marriage – a strange coincidence in that it paralleled Bamford’s celebration of one year of matrimony. So to see this veteran comic, whose verbal clip can sometimes feel like it's daring you to follow along, wax whimsically about a successful relationship got the show off on a pleasant foot.

Guest middler Erin Foley, late of both Conan and Last Comic Standing, created the necessary bridge between Kashian’s more grounded observations and the lunacy, both comic and literal, of Bamford’s material. Foley was compulsively funny, if not necessarily inspired; I found it hard to bear another stand-up set about Donald Trump’s behavior (that guy just cannot catch a break), but I muscled through. The crowd particularly perked up when Foley revealed her sexuality – queer, thank you very much – probably because the material did, too. One joke, in which Foley mimed touching various women’s breasts, elicited a mighty yell of “Fucking sexy!” from the green-haired lady in the row in front of mine.

Thanks to, or perhaps regardless of, Foley’s success, Bamford was in full-schlock mode from the moment she stepped onstage. As a longtime fan of the headliner, particularly of her recent one-hour Special Special Special and the throat-hoarseningly-funny Ask Me About My New God album, it was a treat to see this sometimes bumbly comedian move through a juggernaut of an hour with unbridled optimism. Bamford’s jokes, as usual, ran the gamut from upsetting tales of her breakdown in Chicago circa 2011 to impressions of her Color Me Mine-loving father. “The range!” I kept saying to my partner, who knew nothing of Bamford’s career as a comedy character actor and alternative legend. “It’s the range of her material that’s so overwhelming.” And while that’s true, she was also irrepressibly bouncy and jocular at the Moontower show, moving from stage left to right with a few well-timed hopscotches.

That Prince had just passed away did not go unnoticed: At the end of an impersonation of her new husband, which brought about hoots, hollers, and a standing ovation, Bamford muttered, “Oh, and Prince. It made me sad to hear about that today.” Me, too, Maria, and like many people I know – and many, many more I don’t – I spent a large portion of my workday emotionally crippled by the news. On days like those, to laugh even once can be a satisfying soul-tonic. But for Maria Bamford to make you laugh for an hour straight feels like you are being given a gift.