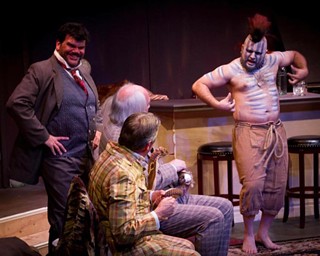 A familiar twinge of discomfort arises watching The Explorers Club at Austin Playhouse, the kind you get when you’re genuinely not sure if it’s okay to laugh. The comedy features a tribal character named Luigi, a shirtless warrior covered in blue and white paint, sporting a flamboyant mohawk, and speaking gibberish.

On its surface, that’s enough “savage othering” to cock the head of any lefty. It’s that very blatancy, however, that demands further inspection. Surely there’s something more going on here. This is a play written by a woman, Nell Benjamin, with strong feminist undertones, ultimately lampooning the idea of white male supremacy and “boys' clubs.” Important ideas are presented in hilarious ways. So, you know … what’s up with all the orientalism?

That question, and the long list of related follow-ups on the topic of race in theatre and/or race in casting, could fill every column inch of an issue of the Chronicle – and the answers would likely depend on who you asked. We decided to ask a few of veteran Austin actor Ben Wolfe, who plays Luigi in the Austin production.

Austin Chronicle: What questions did you ask yourself about the role before accepting?

Ben Wolfe: I wasn’t originally cast. In the script, other than being described as indigenous, from this lost island, painted blue, crazy hair, and one reference to the fact that he’s wearing feathers, there’s no physical description of him. Like, there’s nothing that says “indigenous” means you have to be brown. If you look at some of the other productions’ photos, the guy’s obviously white. I don’t know what significance the playwright put on that. So for me, it was an exercise in remaining present onstage and trying to comprehend what these guys are doing. I feel like my aim was for him to come off as one of the smarter people in that room. The person who was originally cast was also white, and had to drop out for personal reasons, and then Lara [Toner Haddock, the director] came to me and said, “Hey, would you be willing?” And after reading it, I did have some trepidation, you know? I never wanted it to veer into caricature. When I get these kind of roles, I get them because I’m physical, and I can bring some comedy, but I didn’t want it to be, “Hey, this is me making fun of indigenous peoples.”

AC: Was there any discussion within Austin Playhouse about what reactions the character might draw, and what their response would be?

BW: They never had that conversation with me; I don’t know if that was a discussion that was held internally. Now, after the performance on opening, I was talking to [Austin Playhouse company and staff member] Cyndi Williams, and she had very complimentary things to say. She said she felt that she might get calls about this portrayal of this character and whether it was insensitive. She didn’t feel it was. To me – and she and I also discussed this – he is the closest thing to a male feminist on that stage. He doesn’t have the hang-ups, at least as far as my portrayal, about the woman being in the room. It doesn’t make sense to him.

AC: Is this othering and/or orientalism to you?

BW: It’s not specifically a person of color. It’s not specifically a real region of the world. Someone once mentioned to me that when Bronson Pinchot was doing Perfect Strangers, it was very important to him that whatever country his character was from was not a real country, so that whatever characterization he brought to it was his own creation. And I think that’s part of what I wanted this to be as well; it had to be my own creation. It can’t be … I’m not pulling from African tribes or Native Americans, I don’t want to get into any of that, just working solely within the confines of what the playwright has set forth for this character. In the script, the playwright … all of the non-English language that Luigi speaks, she’s written. She says specifically at the beginning of the script, whoever plays Luigi should not ad lib. It was a warning not to go too far, essentially. Don’t add whatever you think this “indigenous” is; here is the framework of the language.

AC: You also played Amir in Ayad Akhtar’s Disgraced this season. How do you feel about the contrast in such an important character, in terms of theatrical racial discussion, and this character?

BW: So far, we actually had one public comment about Disgraced, and I haven’t seen any public comments about the portrayal of this character in The Explorers Club. The question was: Why didn’t you cast a South Asian in the role of Amir? And I suppose that’s where we’ve gotten in society now. People now want authenticity, and when you’re an actor, where does authenticity meet with art? I’m not South Asian. I’m Southeast Asian … I didn’t get into that discussion. Somebody within Austin Playhouse, their tack was: “We choose to work with the best actors that we have access to,” and that’s a legitimate consideration, at least in terms of authenticity. In this particular role it’s open to interpretation; you can do whatever you want with it.

AC: Do you think, then, that within the context of this script, audiences will see your particular body in the character and perhaps make more of it than they should?

BW: Right. And I think that’s inevitable. It’s going to happen. They’re going to see me – I don’t get a lot of sun. I’m not super-brown, but I’m brown. So the thought’s immediately going to be, “Okay, indigenous.” Or whatever that “indigenous” is to them, it’s now an “other,” and that’s the idea of the character: He’s supposed to be an “other” to those in that world. There were moments, in the rehearsal process, where I was just like, “I don’t know if I’m okay with this yet.” I hadn’t reached full-silly level yet, I was thinking, “Oh my God, I’m playing this indigenous person, and I don’t know if the characterization is right, I don’t know if it’s too much or too little, or if it’s too much in one direction, or if it’s going to be offensive.”

AC: What brought you home on that?

BW: Honestly, it was once we got to an audience. You’ve been there: You’ve got the same three or four people watching your show during rehearsals, and the laughs have stopped, so is what I’m doing effective or offensive? Everybody was really supportive, nobody made me feel “You’re playing this because you’re the brown guy.” There was none of that foisted on me in any sense. We never did broach that subject. We talked about how since the other guy couldn’t do it, let’s bring in someone physical, that can tell the story of this character. We had a really nice preview audience, got the nerves out of the way, there was laughter, and there was never that uncomfortable silence or uncomfortable laughter. So once I got past that hurdle, I was like, if an audience is going to go with me on this, then I feel better. Because that is your litmus test, because if you don’t have an audience, what are you doing it for?