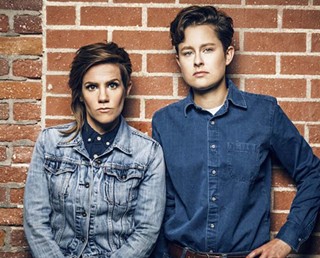 "It’s funny that the show is called Take My Wife and then we’re all white guys.” Those words came from Moshe Kasher, whose mini-set for SXSW Comedy absolutely destroyed at Esther’s Follies Saturday night.

Kasher was one of three comics - the other two, in order of how well they did, were recent SNL release Brooks Wheelan and Meltdown host Jonah Ray – introduced by show hosts Cameron Esposito and Rhea Butcher, neither of whom fits Kasher’s description, but he was on such a roll that the joke went off like gangbusters.

So it was, for the most part, throughout the night, which was sponsored by the nascent streaming service Seeso. Ray, an excellent comic who has a show on Seeso, took an unfortunate dive at the top of his “tall bearded white guy” bit. That left Esposito and Butcher to take the crowd’s energy back to a sprightly place in time for Kasher to send attendees into hysterics with his high-octane set about Natasha Leggero’s period and the “patriarchal pigs” who were manspreading in the Esther’s bleachers.

Esposito and Butcher also solicited belly laughs from the 150 or so attendees. They were promoting two projects: Esposito’s new special, Marriage Material, which premieres on Seeso March 24; and the show they co-created for the service, Take My Wife. Seeso’s Evan Shapiro introduced them with a little too much fervor and not enough goof, but the message was clear: He really supports Esposito and Butcher.

Saturday night’s show demonstrated that he’s in the right corner, as the hosts - who are also married - riffed on festival hassles, The L Word, and their favorite movies (Esposito: The Terminator, Butcher: Back to the Future). A short amount of prepared material made its way into their emceeing, but crowd work and a lot of mugging for phones and cameras – Esposito’s specialty – composed most of their dual performance.